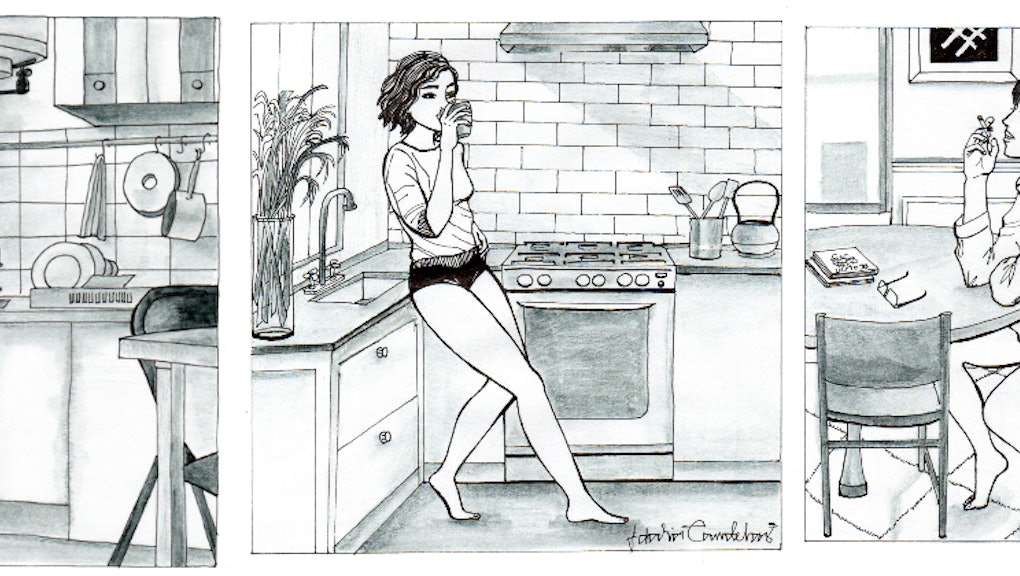 These Drawings Perfectly Demonstrate the Beauty of Single Life, Just in Time for V-Day

Some believe love is in the air 'round this time of year, what with the imminence of the relationship-worshipping fiesta that is Valentine's Day. Amid all the roses and Hallmark cards flooding our drugstore aisles, it can be easy to forget: For plenty of single ladies (and men) out there, the only valentine they want to celebrate with is themselves.

Luckily, one Mexican artist is drawing (literal) attention to the beauty of being alone, with a series of black and white illustrations in which women solitarily go about their lives.

And even though there aren't any men in the picture, love is still in the air!

The woman behind the images is Mexico-based artist Idalia Candelas, who told Mic she uses pencil, ink and watercolor. She has named this particular series "Postmodern Loneliness" and published the drawings in a small book titled Alone.

Candelas said the project was mostly inspired by her time living alone in Mexico City.

"The theme of the loneliness has been recurring in my drawings," she said. "Even though people try to avoid [it] [out of] fear, being in that situation is increasingly common in our society."

But don't let the words "loneliness" or "alone" fool you — Candelas doesn't believe spending time alone is a bad thing.

"I like to show women who exist in solitude but do not suffer," Candelas said. "They are not depressed or crying. Rather [they] are safe, exalting in the sense of enjoying the company of just herself."

An Australian study in 2015 concluded that traveling alone, in particular, often results in "personal feelings of freedom, relaxation and discovery." Meanwhile, other studies have linked general alone time to such positive benefits as being able to have a clear mind and even combat depression.

So if you're flying solo this Valentine's Day, enjoy the luxury of lazily lounging around the house without having to give a shit about anybody else's emotions or Netflix preferences. If these drawings are any indication, it will be a restorative and relaxing weekend indeed.

Check out more of Candelas' work over on her Instagram.