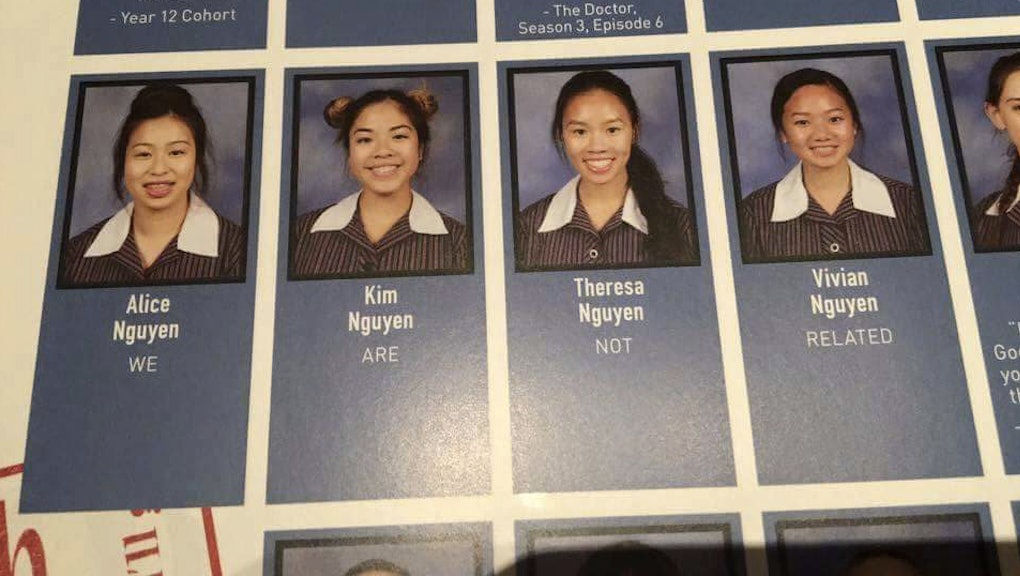 You wouldn't ask everyone with the last name Smith if they were related, would you?

Four students sharing the last name Nguyen were evidently so fed up with fielding this question that they joined forces for a combined yearbook quote to get their point across to classmates.

In lieu of a quote or list of extracurriculars was a four-word message spread out below the consecutive portraits:

"WE ARE NOT RELATED."

The photo, posted to Reddit on Wednesday, didn't provide any context, but collected thousands of upvotes.

The stunt echoed an almost identical one eight students at San Jose's Presentation High School — also Nguyens — pulled in 2012. The message that time: "We know what you're thinking, and no, we're not related!"

According to the school paper, the gag was recognized by Inside Edition, the San Jose Mercury News, the Huffington Post and across social media.

So when some Reddit comments asked why the Vietnamese surname is so common, informed Redditors offered an impromptu history lesson.

When the Nguyen Dynasty seized power in Vietnam in the early 19th century, its leaders "awarded" the last name to many citizens.

But all the credit in the world goes to the students who took their frustrations out in a way their peers could appreciate both for its lesson and its cleverness.

And, if nothing else, it certainly beats "Live, laugh, love."