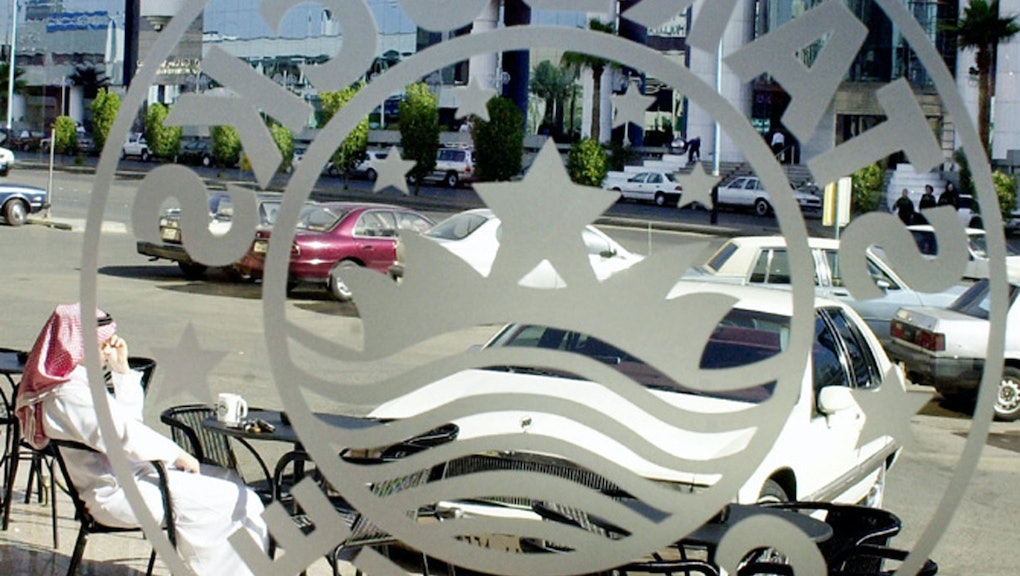 Saudi Arabia has developed quite the reputation with regard to institutionalized sexism where, among a slew of other restrictions, women are banned from driving. But now it appears women can't order coffee for themselves either.

A Starbucks at a Jarir bookstore Riyadh has temporarily banned women after a wall segregating families (the section for women) and singles (i.e. men without women) collapsed.

A sign was posted to the coffee shop entrance that read: "PLEASE NO ENTRY FOR LADIES ONLY SEND YOUR DRIVER TO ORDER THANK YOU."

This invariably made its way onto social media. What started with frustrated would-be customers posting the signs online swiftly morphed into outrage across Twitter.

Mic reached out to Starbucks, which declined to discuss the issue beyond this official statement:

We adhere to the local customs of Saudi Arabia by providing separate entrances for families as well as single people. All our stores provide equal amenities, service, menu and seating to men, women and families. We are working as quickly as possible as we refurbish our Jarir store so that we may again welcome all customers in accordance with local customs.

According to the Independent, Arabic publication Al Weaam says the store was ordered to institute the ban by the Committee for the Promotion of Virtue and Prevention of Vice. Because just imagine the chaos that would ensue should a caffeinated man catch a glimpse of a woman's exposed eyes.

Saudi women already have very little autonomy, as some of the most basic activities must be approved and accompanied by a male guardian — including, for example, some medical procedures.

"No matter whether you're divorced from him, or he disappears, or dies, your legal status is warped," political sociology professor Fawzia Abu Khalid told the Guardian in August. "A woman is only identified through her main guardian after she's married: her husband."

And apparently he needs to order coffee for her now too.