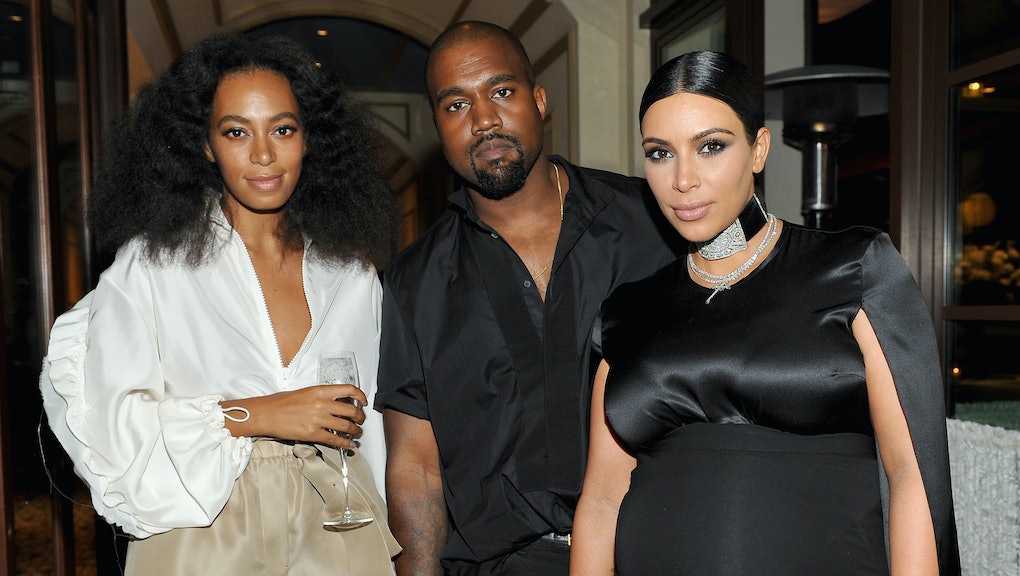 Kanye West and his wife Kim Kardashian West are becoming increasingly confusing about the Feb. 11 release of his forthcoming album. In short, the Chicago rapper can't seem to decide on a name for his next release, from Swish, to Waves, to So Help Me God.

And so help us God, we're ready for him to make a final decision and put an end to these scandalous social media controversies. West recently sat down with hip-hop radio host Big Boy to discuss the mystery behind his album title, saying, "We don't have a name, yet. I wanted to get people's opinions of how they felt."

"Which album title do you guys like better," social media queen Kim K posted in a poll between the titles Swish and Waves to Twitter Monday, tagging Yeezy. "WAIT new poll," she tweeted shortly after, including the third and longest option, So Help Me God.

"I'm tryna open up hearts, minds," West told Big Boy. "When I was sitting in the studio with Kirk, Kirk Franklin, and we're just going through it, I said this is a gospel album, with a whole lot of cursing on it, but it's still a gospel album. The gospel according to Ye. It's not exactly what happened in the Bible, but it's this story idea of Mary Magdalene becoming Mary."

What's in a name? While Swish — the former name for West's new album — scored second place in the latest poll, it trumped Waves in both, which is currently set to be title for "the best album of all time," according to the rapper (West has since walked back that this album is the "greatest," though). However, the original name for West's latest album was the true winner, receiving the most amount of votes in the second poll, or 46%. More than 400,000 people voted in the second poll, while nearly 250,000 voted in the first.

Yes, long before the Twitter war with fellow artist Wiz Khalifa over his decision to change the album title from Swish to Waves, Yeezy was planning on naming his album So Help Me God. "[I'm working] on it slowly," West told radio station Hot 97 in June. "To make it an art project and deliver the innovation that I know I can and that I've consistently done since 808s [& Heartbreak] and [My Beautiful Dark Twisted Fantasy]."

And finally, after a lengthy online dispute which involved indecent slut-shaming and bringing children and wives into the mix, this:

Though all seems to be good and done with the Twitter war, as Kardashian West and model Amber Rose both shared selfies on the social media site together, fans are left wondering just what in the hell is happening with this album title.

Instead of voting on West's final decision as to what his next album title should be, some fans created their own polls to mock the entire ordeal: