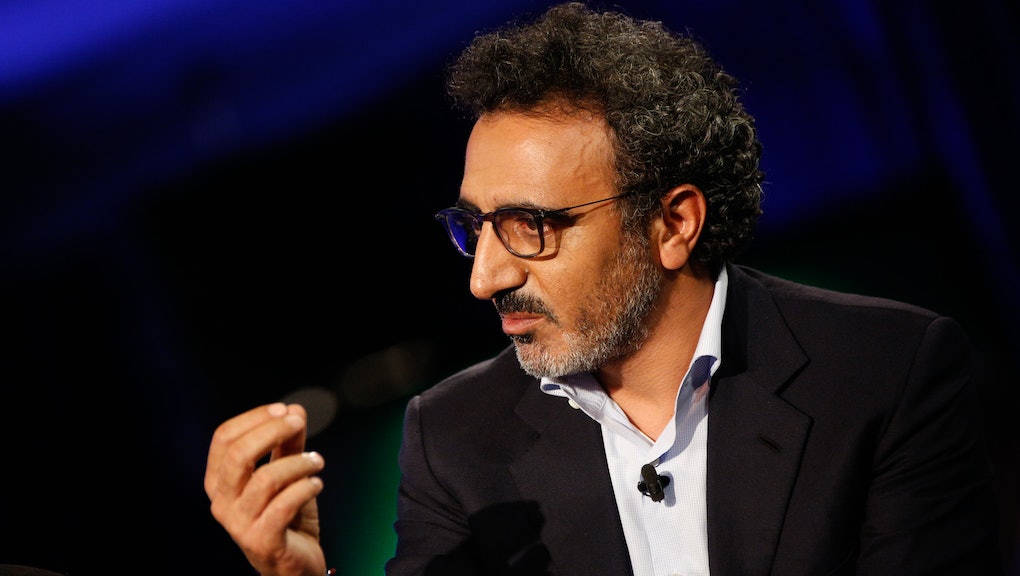 Chobani CEO Hamdi Ulukaya is literally the embodiment of the American dream.

Ulukaya, the son of Kurdish dairy farmers who grew up in eastern Turkey, first emigrated to the United States in 1994 with the goal of studying English in upstate New York. Today, he presides over the largest Greek yogurt company in America and has amassed an estimated personal wealth of over $1.4 billion.

It is precisely because of his rags-to-riches story that Ulukaya is on a mission to tackle head on the worst refugee crisis since World War II. Over the past year, Ulukaya has traveled to places like Lesbos, Greece, to help raise awareness and fight the stigma against Muslims and Syrian refugees in the wake of the Paris attack and San Bernardino shooting. He also garnered praise within business and philanthropic circles in 2015 when he pledged to donate at least half of his personal fortune to help refugees around the world.

"It's highly politicized, but these people are terrorized," Ulukaya told Mic in an interview in New York City. Ulukaya spoke after appearing alongside former President Bill Clinton on Thursday afternoon at the annual Clinton Global Initiative Winter Meeting for a discussion on his work on the refugee crisis.

The business case for tackling the refugee crisis: While finding political solutions to the Syrian refugee crisis remains an ongoing challenge, Ulukaya believes the business sector can do more in the short-term to help address the crisis.

In 2015, Ulukaya founded Tent, a foundation devoted to raising awareness on refugees. As a part of that effort, he launched two different initiatives: the Tent Pledge, asking companies to provide refugees with job training and employment opportunities, and the Tent Challenge, providing grants to entrepreneurs who can devise solutions to the crisis.

Although the program is still in its infancy, Ulukaya says 12 companies have signed onto the pledge. For example, Airbnb now offers travel credits to relief workers working on the ground in places like Lesbos, and LinkedIn will soon debut a pilot program in Sweden that will aim to match refugees with job openings at local companies.

Contrary to the threatening way refugees are often depicted in the media, Ulukaya said his own personal story, coupled with his experience hiring immigrants, has convinced him that the vast majority of refugees can be hardworking and productive members of society.

"I've seen it with my own eyes and in my own factories," Ulukaya told Mic. "When refugees move in a magnitude like this, something happens that they become more aware, more dedicated and harder working. If they're accepted into the community, they'll do whatever [they can] to help the community."

In fact, Ulukaya says hiring immigrants has been positive for Chobani's business. "There are a lot of studies coming out that show that hiring refugees is not a burden in the long run," he told Mic. "It's an opportunity for the community."

According to Ulukaya, 30% of Chobani employees working in the company's factories in Idaho and upstate New York are immigrants, and together they make up 11 different nationalities.

The challenge of integration: Of course, success hinges on whether refugees properly integrate into their new communities, an ongoing challenge for countries like Germany, which took in over a million refugees in 2015 but has come under fire after a series of attacks perpetrated by migrants in the city of Cologne on New Year's Eve.

Ulukaya is clear to recognize that integration poses an ongoing challenge. "I built my dream, and this could happen everywhere," Ulukaya said. "But integration has to happen in both ways. I was successful because I didn't come with the mindset that I am different. You have to welcome and respect the place you are coming to."

Still, Ulukaya emphasized that despite the challenges, he remains confident that doing more to hire and integrate refugees is important not only for humanitarian reasons, but also to fuel business' bottom line.

"The suffering is so big that if you don't answer it, it's going to create damage to humanity," Ulukaya said. "If we don't respond to this, we're going backwards, and we can't go backwards. We must go forwards."