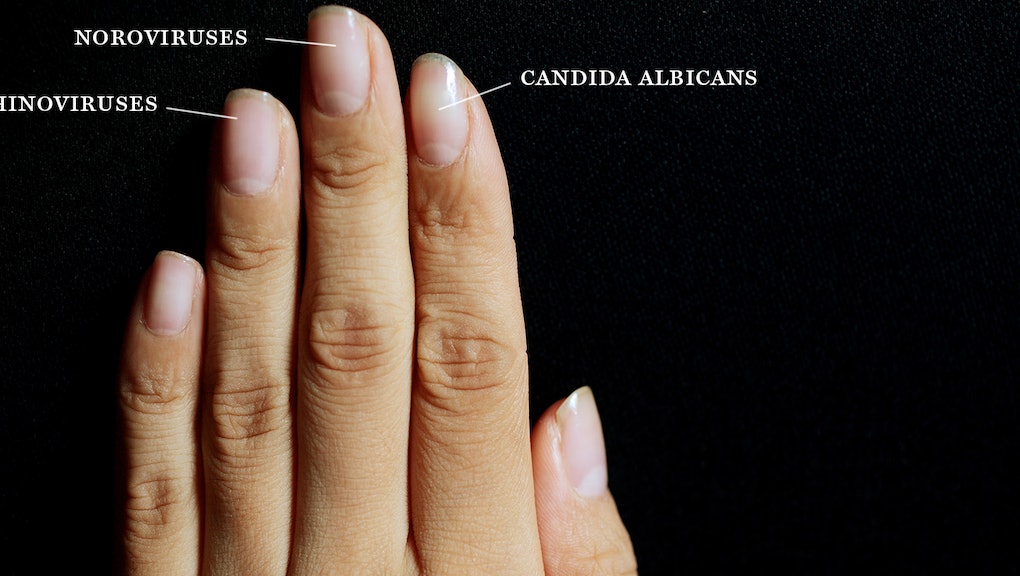 Listen up: Your fingernails are a breeding ground of disease, pestilence and the occasional yeast infection. You should stop sticking them into your face.

Fingernails are probably the most worthless of mammalian claws. At one point, they helped us hunt and gather food, and we still have them in order to grab things and scratch things. Still, everything we do with our fingernails leaves nasty stuff stuck beneath them.

Even when you can't see visible dirt under your nails, there's no shortage of gnarly bacteria. It's clinging to your claws like an underside French manicure with black polish.

Consider what you touch every day. You might scratch your skin. You might wipe your swimsuit parts or prepare raw meat or veggies — both of which carry pathogens. You're basically walking around all day getting bombarded with diseases like rhinoviruses, noroviruses and fungi like candida albicans, which lives comfortably under your fingernails and can cause a "yeast" infection if spread to the genitals.

Clipping them might leave less area for bacteria to cover, but that doesn't change the diversity of crap lurking underneath.

Natural nails aren't the only concern: If you wear artificial fingernails, those things catch bacteria like a jai alai cesta. The area between the organic nail and the fake nail is a bacterial war zone, too. That's why you won't often see nurses wearing acrylic nails in hospitals.

"Application of artificial fingernails can harbor a large number of pathogens," Dr. David Blackmer, a podiatrist at Idaho Footcare, told Mic. "The acrylic in the artificial nails can give rise to the growth of gram-negative bacilli (pseudomonas) and yeast between the natural and artificial nail. This area is a perfect location for other pathogens to grow."

What about your toes? Even though your feet might smell worse than your hands, your toenails aren't exposed to nearly the same amount of bacteria as your fingernails: They're usually hanging out in your socks all day, not handling raw meat (but hey, if you're into that stuff, no judgment here).

Your toes are still at risk of infection from the fungi onychomycosis, a chronic form of athlete's foot that makes your feet dry out and crack.

"Onychomycosis may lead to the development of secondary bacterial infections, ingrown toenails and in the rare case, loss of limb," Blackmer told Mic. Losing a limb because you can't clean your toenails is a Darwinian punishment. So what can you do?

Learn to clean yourself. "Eighty percent of all infections are transmitted through contact, direct or indirect," Dr. Philip Tierno, a clinical professor at the departments of microbiology and pathology at NYU Langone Medical Center, told Mic. "The fingers are the 10 dirtiest things on your body."

Direct contact with another person — kissing, coughing, talking in someone else's face — is easy enough to prevent: Just don't go around making out with sick people. Indirect contact is where you get the gross stuff. That includes touching an inanimate object that's been contaminated by someone else, then touching your mouth or nose, or touching some object against a scratch or cut on your skin. They act as conduits for disease, Tierno says.

"When you wash your hands after handling food, use a brush with soap on it to get under the nails, especially if they're longer than average," Tierno told Mic. "When you use an alcoholic gel sanitizer, scrape your fingernails on your palm, which is now covered in the gel."

Tierno also says to scrub your hands to the rhythm of the "Happy Birthday" song. Twice. It may sound like overkill, but when you think of how well you'll stay clear of staph infections, you might be ready to celebrate a birthday, any birthday, a few times a day.