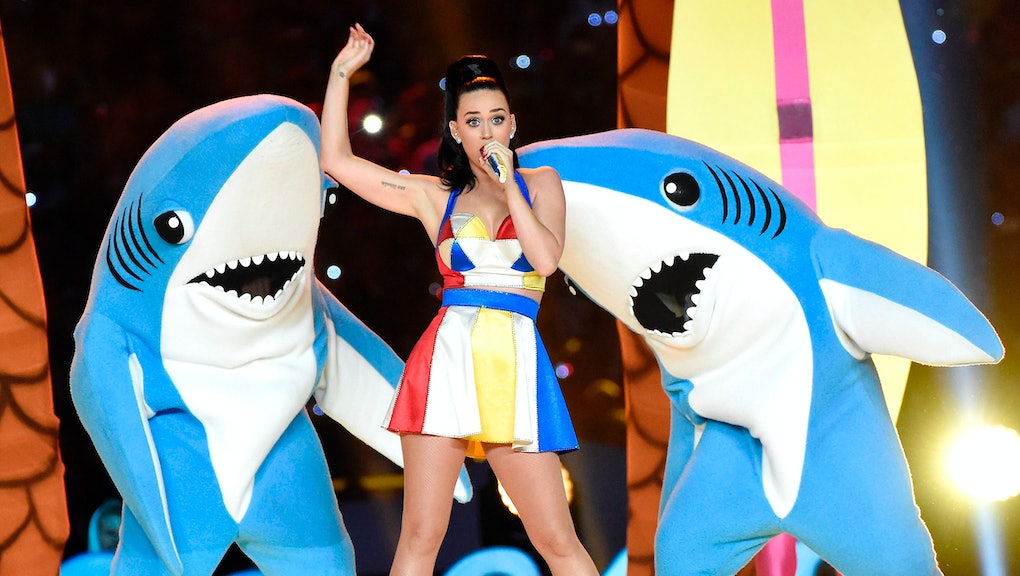 Every year, the Super Bowl is — unsurprisingly — the most bet-on sporting event of the year. A multitude of bets will be wagered between now and Sunday for the winner of the matchup between the Denver Broncos and Carolina Panthers. However, every year the Super Bowl also draws an amusing set of prop bets, which in years past have ranged from the chances of a player being arrested before the game to the color of Katy Perry's hair during the halftime show.

This year, once again, several prop bets through online sports books OddsShark and Bovada.lv are available. Here are some of the most ridiculous.

Will Left Shark make an appearance on stage during the Super Bowl? — OddsShark and Bovada.lv: While you can bet on this, the chances are very slim, and it would certainly require some collaboration on the part of Coldplay and Beyoncé, who are slated to perform at this year's halftime show. However, Left Shark would certainly be a welcome surprise appearance.

How many times will "dab" or "dabbing" be said by the announcers during the broadcast? — OddsShark and Bovada.lv: The media and fans are obsessed with Cam Newton's propensity to 'dab' after scoring a touchdown, and it will certainly be at the forefront of the announcers' topics of conversation — particularly if Newton finds the end zone during the game.

How many times will Cam Newton do the open-shirt Superman motion during the game? — OddsShark and Bovada.lv: Another well-known Newton celebration is his open-shirt Superman pose, which he's been doing since his rookie year in the NFL. Of course, it's hard to gauge whether he'll lean more towards the dab or the Superman after a score, so it's a tough call for prospective betters.

Will Ted Ginn Jr. drop a pass? — OddsShark and Bovada.lv: Ouch. The nine-year receiver has had a propensity for drops throughout this career, so it's certainly a tough call. However, he's had his best season to date and is one of the key offensive contributors for the Panthers. Case in point: his touchdown in the NFC Championship game against the Arizona Cardinals.

Will Peyton Manning be seen crying at any point during the entire broadcast? — OddsShark and Bovada.lv: Manning is 39 years old and this could very well be his "last rodeo" in the NFL. As such, there is the possibility of an emotional end for Manning, especially if the Broncos are able to win the Super Bowl. This one's close for the future Hall of Fame quarterback.

Will Peyton Manning announce his retirement in the post-game interview? — OddsShark and Bovada.lv: Similarly, if Manning retires, there is a chance he could announce it during a post-game interview, rather than wait it out over the offseason. However, it's a huge career decision, so it might not be a judgment call made on national television.

How many wings will Buffalo Wild Wings sell on Bowl day? — OddsShark and Bovada.lv: It's no surprise that wings are a hot commodity on Super Bowl Sunday, and as such, a lot of orders will be placed through Buffalo Wild Wings. The odds are over/under 12 million, and the company will make an official announcement that will determine the total, according to OddsShark.

Will Mike Carey be wrong about a challenge? — OddsShark and Bovada.lv: Mike Carey is slated to be the head referee for the game, and when coaches challenge a play on the field, hard evidence has to be in place for the call to be reversed. That, combined with the fact that Carey is a pretty good NFL referee, means this outcome should err on the side of unlikely.

How many times will the Golden Gate Bridge be shown during the broadcast? — OddsShark and Bovada.lv: Since this year's game will be played at the San Francisco 49ers' home, Levi's Stadium, it's likely that the broadcast will highlight the landmark. As a staple of sporting events — showing a local landmark — when returning from a commercial, this one's a near-lock.

Will there be an earthquake during the game? — OddsShark and Bovada.lv: While the West Coast has a greater propensity for earthquakes, this does seem a bit out of left field and highly unlikely.

What color will Beyoncé's footwear be when she's onstage for the halftime show? — OddsShark and Bovada.lv: Another curious point of debate, and in total there are the options of black, gold/brown, white, silver/gray and another color. However, for the sake of the bet, it could very well be gold/brown, as that was used in her appearance in Coldplay's "Hymn For The Weekend" music video.

Will either Donald Trump, Hillary Clinton or Bernie Sanders be mentioned during the broadcast? — Bovada.lv: Politics has a tendency to appear even in the most unrelated circumstances — particularly in an election year. However, it might come down to the score of the game. If it becomes a blowout, typically, the announcers will have to talk about non-sports related items as a means to keep fans entertained.

What color will the liquid be that is poured on the winning coach? — Bovada.lv: It's a timeless sporting tradition: Dumping the cooler filled with water, or some form of sports drink, onto the winning team's head coach. With seven colors to choose from (including clear), this will be a close call.