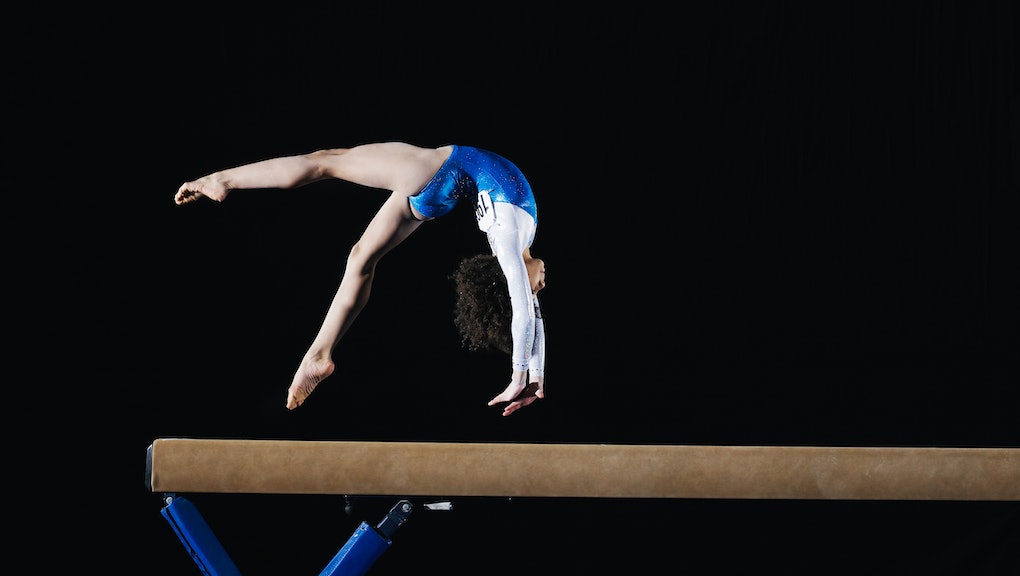 I wasn't used to touching people so much at the gym.

But making physical contact with strangers wasn't the only unusual aspect of Crunch Gym's unique new workout class. My classmates and I also performed handstands and held the plank position while balanced on one another's bodies.

Dubbed the Acrobat's Workout, Crunch's new class lets you "learn vibrant tricks while conditioning your muscles," according to the press invitation. Participants start by learning fundamental techniques like yoga push-ups and hollow body rocks, before progressing onto more complex moves — think lying on your back and lifting a person's ankles into the air as they grip your ankles, forming a sort of human box.

"Some people might be frightened by the word acrobat, that happens sometimes," Lila Donnolo, the Crunch group fitness instructor who leads the Acrobat's Workout, told me. "But the people who are coming are having a great time."

Acrobatic workouts are still fairly new to the mainstream fitness landscape. One of their most popular iterations is AcroYoga, a blend of acrobatics and yoga founded by Jenny Sauer-Klein and Jason Nemer in 2003. The workout has since exploded in popularity, with celebrities like Lena Dunham, Ashley Judd and Gisele Bündchen gleefully taking part.

A little skeptical? Eager to try it? Here's what you should know.

The Physical Benefits Are Huge.

It hits your whole body. Hoisting another person's body into the air requires more muscles and more coordination than, say, an isolated bicep curl. "Each technique is, in its own way, a whole-body workout," Donnolo told Mic. "There's nothing in acrobatics where you're just using one muscle."

"It's targeting just about everything," she said. "Legs, arms, core — everything has to work in tandem. All your muscles have to coordinate to make these things happen."

Donnolo is certainly right about that. Planking on top of another human being was hard work. Not only were my core, shoulders and arms engaged, but all my muscles seemed to subconsciously kick into overdrive so I didn't accidentally collapse onto the woman beneath me.

Speaking of collapsing, don't worry — there's no need to fear falling. "Most people are afraid to leave the ground, but instructors are experienced in gently coaxing students through in stages," Suzi Winson, director of the professional program for aspiring circus artists at New York City's Circus Warehouse, told Mic via email.

"It's also good to be reminded that the floor generally stays where it is — and it will have a crash mat on it!" Winson continued. "People fear falling, but once you realized that you are going to fall sometimes, you can make friends with it."[

It also helps with proprioception, or bodily awareness, according to Donnolo. "Your proprioception game goes up because you have to figure out how to get these muscle groups to coordinate together to have the desired effect."

It Can Help Your Relationships.

Performing acrobatic stunts with a partner helps bring people closer together. In a story about AcroYoga, CBS suggested the workout was "better than couple's therapy."

Howes and his girlfriend, Jen Esquer, said the workout helps them build trust: "It's me being able to trust her that she's going to be able to do what she needs to do while I'm holding her up, and she's got to trust me fully because some guys have dropped her on her head before," Howes said.

Plenty of scientific research supports the idea that partner-based workouts improve romantic relationships. When you and your partner mirror each other's physical movements, you create "nonverbal mimicry," according to Psychology Today. Nonverbal mimicry "helps people feel emotionally attuned with one another, and those who experience or engage in it tend to report greater feelings of having 'bonded' with their partner," the article reads.

"Connecting with another human, working hard to support them, trusting them — it creates this almost instant camaraderie," Donnolo told Mic. "That's really beautiful."

Donnolo has witnessed friendships form in acrobatics class. "You leave, and that connection continues," she told me. "You see them the next time, and you're like, 'Hi, I put you up in the air! I put you on my feet!'"

There's science behind that too. In a 2014 study called "Pain as Social Glue," researchers found that sharing pain with other people "promoted trusting interpersonal relationships by increasing perceived bonding among strangers."

There Are Psychological Benefits Too.

Like in the case of hot yoga, the biggest benefit of acrobatics might be what happens inside our head.

Donnolo recalled what it's like watching full-grown adults do cartwheels across the workout studio. "People were just grinning from ear to ear, ecstatic," she said, adding that going upside-down makes people feel "slap-happy."

"So many adults have a fear of it," she said. "To break through that feeling of being afraid of something you used to love when you were a child, it's cathartic. It's revelatory for some people."