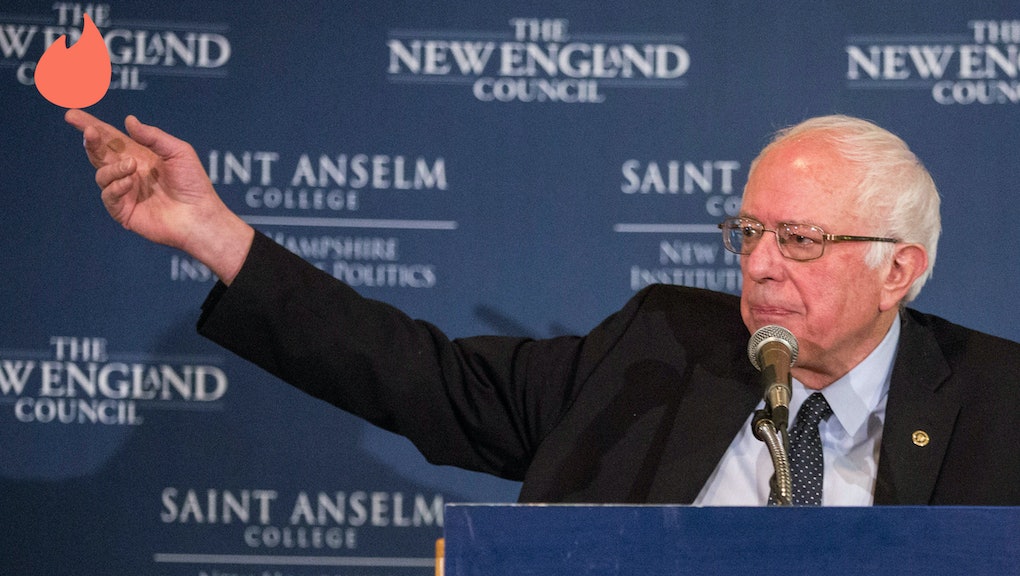 Reuters reported Friday that two women have had their Tinder accounts suspended this week for harassing people with messages promoting the presidential candidacy of one Sen. Bernard "Bernie" "Feel the Bern" Sanders.

One of the women had even upgraded to a premium paid Tinder membership in order to attain maximum reach for her political agenda!

Twenty-three-year-old Robyn Gedrich told Reuters that she had been hitting up 60 people a day with messages that asked, "Do you feel the bern?" before shamelessly asking potential suitors to "please text WORK to 82623 for me. Thanks."

She didn't even use an exclamation point after the "thanks." Rude.

The other culprit of political Tinder-spamming was 22-year-old Haley Lent, who told Reuters that she "would ask them if they were going to vote in their upcoming primaries ... If they said no or were on the fence, I would try to talk to them and persuade them to vote."

When Tech Insider asked Gedrich why she decided to take her bern-ing (sorry) political beliefs to Tinder, she pretty much blamed it all on Winter Storm Jonas.

"I started it about two weeks ago when we got that snowstorm in New Jersey," she told the site. "There's so many lazy millennials that would never read about Bernie unless someone sent it right to them [on Tinder]."

These women aren't the only ones using Tinder as a platform to further their political causes. A Tumblr account called Tinder Campaigning chronicles "the adventures of a perpetual right-swiper in the efforts of electing Bernie Sanders." There's also a Facebook group called Bernie Sanders' Dark Tinder Convos, which has more than 1,000 members.

There's a hot mess of politics and horniness on the group's wall:

And here is a user who has superimposed Bernie's face on a pair of boob-nipples (NSFW, obviously):

The phenomenon of using dating apps as an activist platform of sorts isn't just limited to Sanders supporters. In the past, STI outreach activists have used Grindr to convince guys to get tested for HIV, and people have been known to use Tinder to try and get free stuff and/or sell their own stuff. Let's not even talk about celebrity Tinder marketing campaigns (love you, though, Hilary Duff).

In essence, the moral of the story here is that if you're on Tinder, trust no one. The world is garbage. Feel the Bern. Here's what that hot girl you're talking to on Tinder actually looks like on the inside: