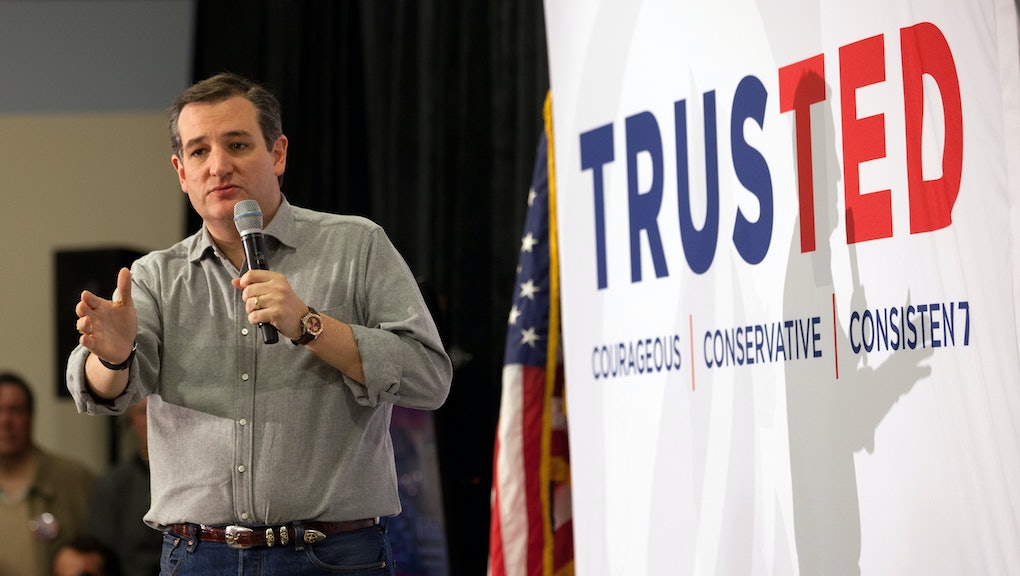 Can You Spot the Hilarious Problem With Ted Cruz's New Logo?

Texas Sen. Ted Cruz, who recently bested presumptive frontrunner Donald Trump in the Iowa caucuses, has an unintended problem with one of his campaign logos.

"A transrectal ultrasound (TRUS) is an ultrasound technique that is used to view a man's prostate and surrounding tissues," reads an entry on the Canadian Cancer Society's webpage. "The ultrasound transducer (probe) sends sound waves through the wall of the rectum into the prostate gland, which is located directly in front of the rectum. TRUS may also be called prostate sonogram or endorectal ultrasound."

In that sense, Cruz's logo can be read as either "trust Ted" or "perform an unflattering medical procedure on Ted's posterior." It's the perfect thing to go with his campaign logo, which kind of looks like a burning U.S. flag.

In 2014, Cruz lobbied against a Senate bill supported by Democrats which intended to prevent tight restrictions on abortions, including mandatory ultrasounds for women choosing to terminate their pregnancies, the National Journal reported.

Other presidential candidates have endured similarly minor flaps over their choice of campaign logos.

Democrat and former Secretary of State Hillary Clinton's logo was mocked by some after its introduction, though Quartz later noted it had unexpected versatility. Former Florida Gov. Jeb Bush, who has collapsed in the Republican polls, re-introduced a modern version of his 1994 gubernatorial race logo, which just says "Jeb!" leading to no shortage of jokes.

Still, the gross joke spreading about Cruz's logo has nothing on the horrible things that now appear in Google search for fellow Republican Rick Santorum, who earned the internet's ire for his record of bigoted statements about LGBT people.