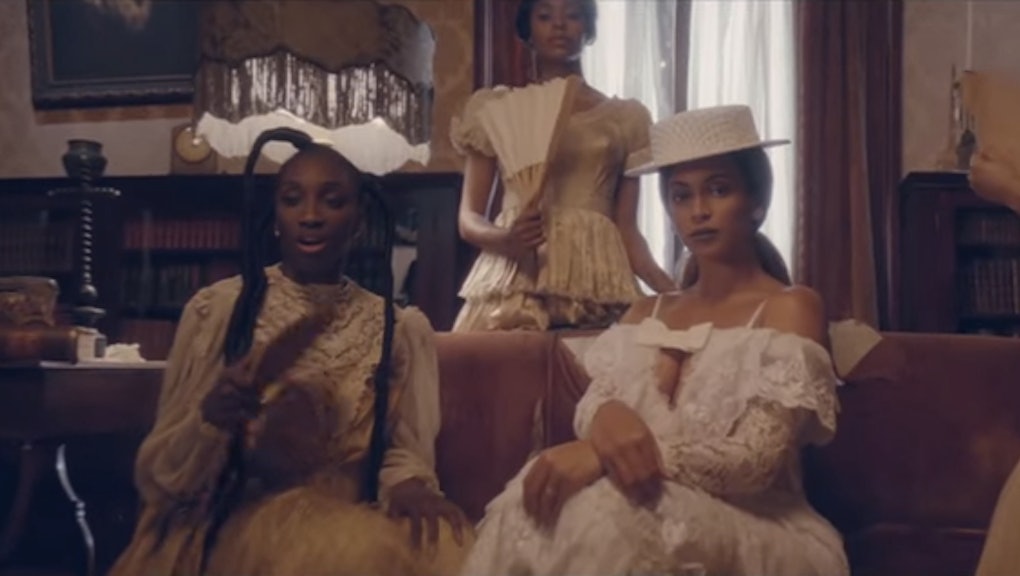 Produced by Mike WiLL Made-It, the song touches on several aspects of black identity and culture, with nods to Black Lives Matter, life after Hurricane Katrina, and Beyonce's personal family life. But the Carters don't just talk the talk. Tidal announced Friday that it will donate $1.5 million to the activist group Black Lives Matter and several social justice groups and organizations.

1. "My daddy Alabama, Momma Louisiana / You mix that negro with that Creole make a Texas bamma."

Beyoncé opens up the song with the origins of her family, illustrating her father's background as an African-American man from Alabama and her mother as Louisiana Creole, the descendants of French or Spanish settlers. The singer makes no apologies for her roots, which are as southern as it gets.

2. "I like my baby hair, with baby hair and afros / I like my negro nose with Jackson Five nostrils."

Beyoncé also offers lyrics based towards how society perceives black features. The singer unapologetically addresses the controversy around her daughter Blue Ivy's hair in the lyrics. She then goes on to talk about how she has no problem with her nose, even if society deems large noses unattractive.

"Beyoncé just made me so proud of my nose," Chicago hip-hop artist Chance the Rapper tweeted when the song was released.

3. "Earned all this money but they never take the country out me / I got hot sauce in my bag, swag."

Beyoncé also mentions that despite the money she makes, no one will ever take her upbringing from her, still keeping hot sauce in her bag.

Beyoncé continues with her bravado, tapping into the fierceness that so many of her fans have come to love and appreciate. But for some black women, Beyonce spoke to them personally in "Formation", invoking Black Girl Magic.

"During "Formation," when Beyoncé switched from "And I slay" to "And we slay," I stood up, alone in my room, screaming 'WE SLAY!'," Margaret Jacobsen, a contributor for Romper, wrote. "Formation is an anthem for Beyoncé and black culture, but, most of all, it's an anthem for black women."

One of the most poignant images from the music video, a young boy with a hoodie on was shown raising his hands in front of the police. The police raised their hands after he did, then the screen cut to a graffiti wall with the words "Stop shooting us."

According to Spin, Queen B might be performing her newest song at the Super Bowl Halftime Show with Coldplay Sunday.