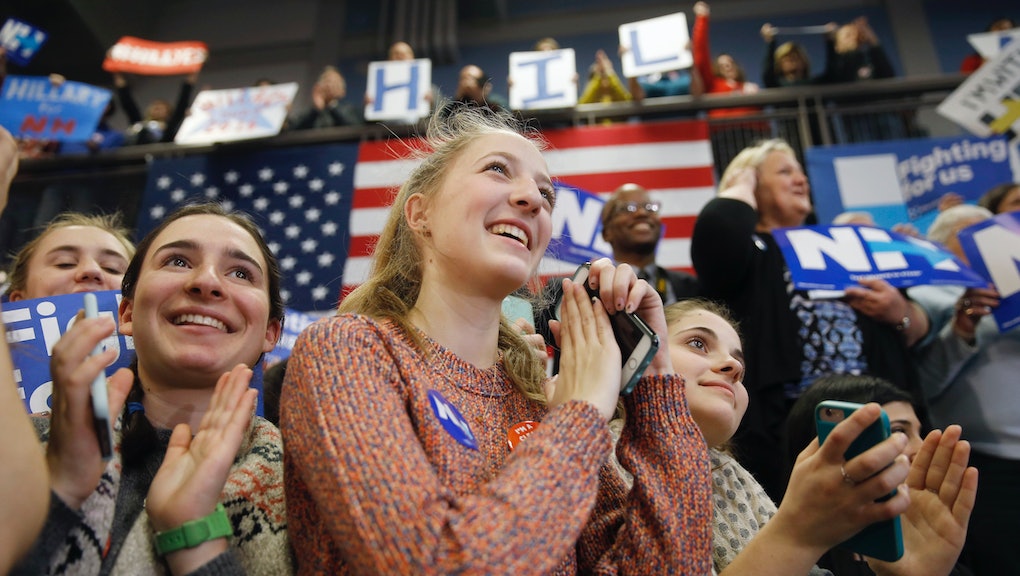 During an interview with Bill Maher, Steinem said young women are engaged and active in politics, but found herself in hot water when she waded into the issue of young women supporting Sen. Bernie Sanders (I-Vt.), Clinton's rival for the Democratic presidential nomination.

"When you're younger, you think: 'Where are the boys?' The boys are with Bernie," Steinem said, trying to explain the fact that Sanders has attracted the majority of support from young women. On Sunday, Steinem apologized, saying she "misspoke."

Since Steinem's comments, plenty of commentators have weighed in to decry the dire state of Clinton's standing among young women. Almost none of those who have chimed in, however, are young women themselves. Even fewer have been actual Clinton supporters, of whom there are many — even if they are outnumbered by Sanders voters in the polls.

To find out what's motivating the group of young women who are supporting Clinton, Mic went to Clinton's campaign headquarters in Concord, New Hampshire, on Sunday to talk to the young volunteers and organizers spending their time trying to elect Clinton president. Planned Parenthood president and CEO Cecile Richards was there to rally the troops and we expected to find a crowd of older women working on Clinton's behalf.

Instead, the room was bustling with young students eager to hit the pavement and canvas for Clinton in the final days before the New Hampshire primary.

We asked them why they're supporting Clinton over Sanders, and their responses revealed a diverse mix of optimism and cool-headed pragmatism. The young women we spoke to were excited to be part of the first generation to elect a female president, and believe a Clinton victory would be a triumph for women across the country.

What they said: Chelsea Rose is a senior in high school, not yet old enough to vote. Regardless, she spent her Sunday afternoon making phone calls to convince New Hampshire voters to get out for Clinton at the primary on Tuesday.

"[Clinton] is a big advocate for middle class rights and women's rights and looks out for a lot of different groups," Chelsea Rose told Mic, when asked why she counted herself among Clinton's supporters.

Sabrina Heart-Meyer is 17, and spends most of her weekends helping the campaign in New Hampshire.

"She is the most qualified candidate to be president, and I think she'd make a great one. There's that historic aspect of I think: it's time we have a woman president in this country," Heart-Meyer told Mic. "She's more electable than Bernie is, I think that I don't want a Republican in office so I think that she's the one that's going to be able to beat the Republicans when it comes down to it, and also her experience, she has so much experience."

Heart-Meyer cited Planned Parenthood and reproductive justice as her most important issues. "[Clinton] is pro-choice, so that's a big issue for me," she said. "I don't think the government should take [the right to choose] away from you."

Young women know what's on the line: The idea that young women aren't supporting Clinton as fervently as their mothers or in the same numbers is often explained as a failure by the younger generation to appreciate the significance of the fight for gender equality.

For instance, Danielle Kurtzleben wrote for NPR that "the split has exposed a fault line around feminism in America, between women who grew up in an era when they weren't allowed to wear pants to work, for example — and young women who have never known the kind of discrimination and stereotypes their mothers faced."

That argument relies on the assumption that millennial women have no experience with inequality — or, if they do, the inequality they face pales in comparison to that experienced by their mothers and grandmothers. But that understates the inequality women face in 2016: Whether on political, economic or social issues, today's young women are getting the short end of the stick.

The Clinton workers we spoke to were were grateful for the work of previous generations of women, and knew any progress made in the past could be easily washed away.

And it isn't just young women. The young female Clinton supporters were joined in their conviction by many young men working side-by-side at headquarters in Concord, making calls and preparing to canvass. Several of them expressed excitement over the historic nature of Clinton's possible election.

"I am very excited about the idea of a first female president," Jake Garfield, a senior in high school, said between phone calls. "I feel like women's rights are like everyone's rights. Twenty percent of the Senate is women, and they've actually gotten the most done," mentioning the fact that only female senators showed up to work during the recent snowstorm that brought Washington, D.C., to a standstill.

Another senior sitting nearby agreed. Matt Wassong is only 17, but says Clinton's plans for education reform are more "realistic" than Sanders', and Clinton "has a better chance of getting that done than he does."

Still, Wassong said many of his friends and classmates were Sanders fans.

"I feel like a lot of the guys in our class are supporting Bernie Sanders," Wassong confided. When asked why that was, he shrugged. "I'm not sure."