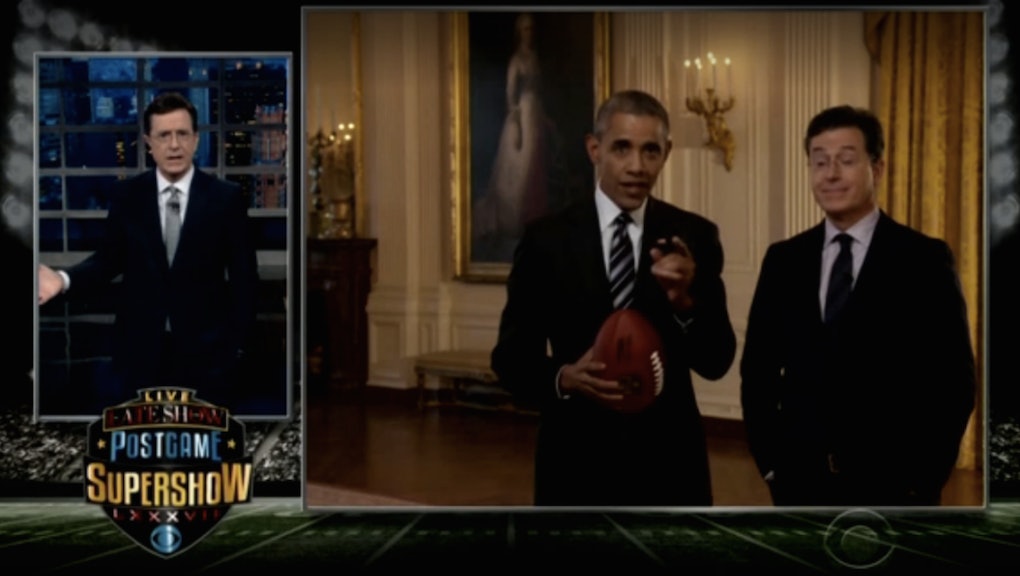 In a hilarious post-Super Bowl skit on the Late Show With Stephen Colbert, Obama made a guest appearance in which he admitted to often betting on the big game, to which Colbert retorted doing so is, in fact, illegal.

"I'm the president. I hereby pardon myself," Obama casually responds.

After fumbling through a vague recap of the NFL extravaganza — and getting called out on it by Colbert — Obama's second admission follows:

"Well, look, you caught me," Obama says. "This is not actually live. This is a pre-tape we shot last week."

"Sir, with all due respect, I've made a really big deal about how this is a live show tonight," Colbert nervously suggests. "I really find it hard to believe that you are pre-taped."

"Alright, I'm going to prove it to you. Come on out here," Obama counters... summoning none other than Colbert.

"Hey, man. Good luck with the live show," the second Colbert says to the first, in one of the most meta moments late night television has witnessed. "That's a lot of pressure. Glad I'm not you."

The three proceed to defy the space-time continuum with Pre-Taped Obama making an accurate Super Bowl prediction (which, says Obama, are written on the back of the Constitution) and the existence of — oh, God — a National Treasure 3 (you can find the script, says Barry, on the back of the Declaration of Independence).

Naturally, the comedic apex comes with the introduction of America's coolest mom, Michelle Obama doing a Super Bowl dance with a group of kids.

When Obama launches an errant ball at his wife, she goes full disapproving wife.

And Obama, the shamed husband, pointing a finger at Colbert.

The Lame Duck got jokes.

The full segment can be watched here: