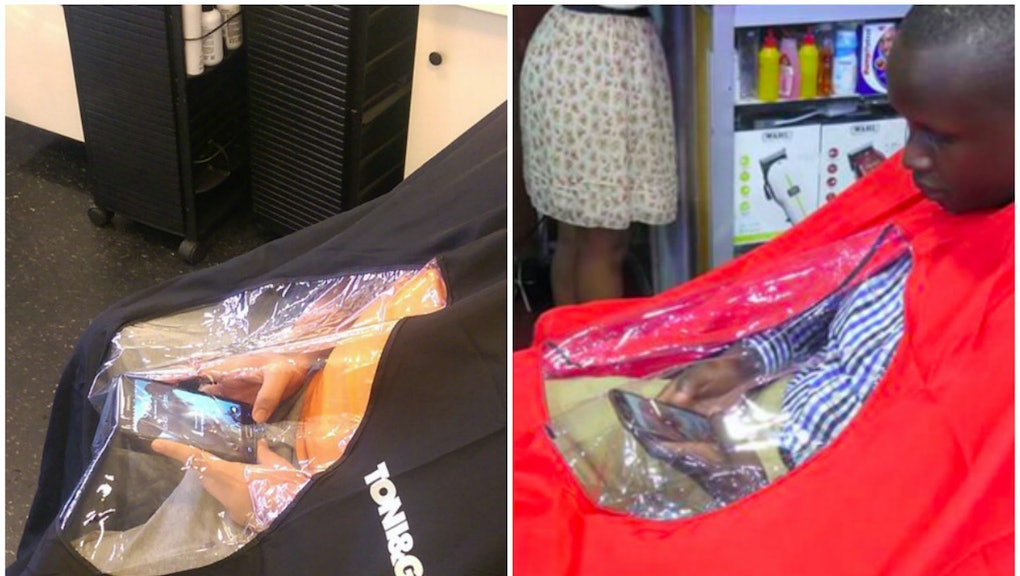 There are many inconveniences we face when we get our hair cut. There's the sitting still, the awkward eye contact, the insistent need to keep up a constant stream of witty banter with your stylist for at least 20 minutes and then, worst of all, the fact that you can't really use your phone.

Well, people, we've now gotten a glimpse into the future, a future where one cape is here to save us from the incapacitated feeling we get whenever we sit down in a barber's chair.

Introducing: a cape with a see-through plastic circle in the middle of it.

Pointed out to us by Monday's FashionREDEF newsletter, which found the image on Nairobi Wire, this cape comes with a clear plastic hole so, yes, you can use your phone while getting a haircut.

This is genius, we say. Genius. No longer will you have to feel a pang of anxiety as your phone buzzes in your pocket or your purse, nor will you stress about having nowhere to look when your hairstylist tries to make eye contact.

Seeing how remarkably simple this invention is, you may be bubbling with rage that this same cape isn't at your favorite salon. But it's out there, perhaps coming to a hair cuttery near you soon. In 2015, a similar image was posted to Reddit with the caption, "My barber got new capes so you can text while getting a haircut." A company called iCapes is also apparently out there making them, having gotten started on Kickstarter.

Frustratingly, there are several patents out there for a similar cape, the oldest one dating back to 1942, when they call it a barber's apron. (How quaint!) There was another application for a similar product in 1978, when they called it a weather-proof garment. In the dark ages, before the birth of cellphone addiction (or even cellphones), why did these people want to have the ability to look at their lap while getting their haircut? Maybe they did crossword puzzles on their lap, or read the newspaper like people used to do. (Again, how quaint!)

Naturally, similar patents were submitted in more recent years, starting around 2011 — right when tech addiction really took over our lives as we all twiddled around on our iPhone 4s.

Now that there are salons actively doing away with the small talk entirely (thank goodness), it seems like the world is edging to a place of zero human interaction whatsoever, at least at the hair salon. This magical see-through hole certainly doesn't get you out of being a decent person and saying "please" and "thank you" to your hairstylist, but it may save you from any awkward lags in conversation we know all too well.