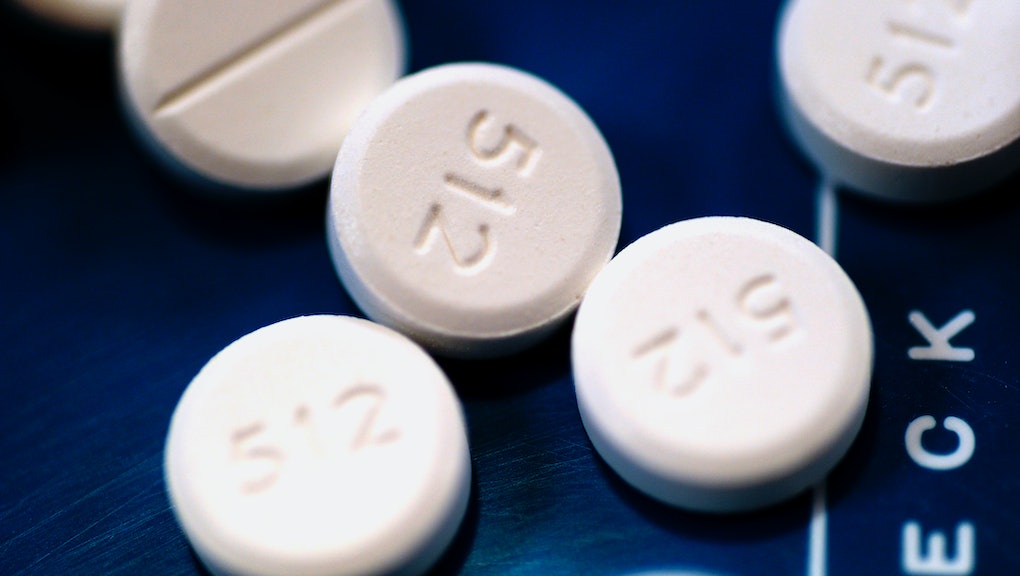 If you were one of the 100 million Americans who tuned in to the Super Bowl on Sunday, you probably watched a funny black-and-white commercial about a man who can't poop. Maybe you chuckled at his struggle to find relief, his jealous reaction to a squatting dog and the toilet paper on a woman's shoe: To many people, constipation is a joke, the unpleasant effect of eating too much pizza. But behind the poop humor is a health crisis that's far more serious. It's a disturbing true story about the limitations of American health care, the outsize influence of Big Pharma and the unseen trauma of illness and addiction.

The man in the commercial, titled "Envy," is afflicted with opioid-induced constipation, a common side effect of opioid painkillers. The ad encourages viewers to talk to their physicians about medication to manage their OIC and to visit a website called OICisdifferent.com.

The estimated $5 million ad was paid for by pharmaceutical companies AstraZeneca and Daiichi Sankyo, the makers of Movantik, a drug designed to treat opioid-induced constipation. Essentially, it's a drug that lets you more easily stay hooked on other, more addictive drugs.

The enormous marketing campaign — a TV commercial played during the most-watched TV event of the year — made it seem as though opioid addiction is a natural, widely accepted aspect of American life, the drugs as commonplace in our culture as Heinz ketchup and Bud Light.

Suspicious? You have a right to be. "There must be a reason why they think it's a smart business decision to invest that much money into an advertisement," Marisa Hebble, director of the Opioid Task Force in northwestern Massachusetts, told Mic.

Essentially, Movantik is a drug that allows you to more easily stay hooked on other, more addictive drugs.

Opioids are at the heart of one of the country's most pressing drug addiction problems. The number of Americans who use the opioid heroin is on the rise — as are the number of heroin-related deaths. Between 2012 and 2013, the number of U.S. heroin-related deaths nearly quadrupled, according to the Centers for Disease Control and Prevention. The opioid problem is so dire, in fact, that President Barack Obama recently pledged $1.1 billion to fight it.

"More Americans now die every year from drug overdoses than they do from motor vehicle crashes," Obama said during an October visit to Charleston, West Virginia, according to the New York Times. "The majority of those overdoses involve legal prescription drugs. I don't have to tell you, this is a terrible toll."

This is why medical experts told Mic they were alarmed to see the ad during last night's football game.

"In the midst of an opioid crisis, making it easier for people to stay on opioid medication is a really strange message to be sending," Hebble said.

Dr. Lewis Nelson, a professor of emergency medicine and toxicology at NYU Langone Medical Center, agreed. "It's sad, in a way, that the use of this drug has become so prevalent that it's worth spending several million dollars for a 30-second commercial," he told Mic. "It's quite sad."

The campaign is indicative of a more widespread problem, experts told Mic.

Big Pharma keeps pushing prescription opioids. Doctors keep prescribing them for chronic pain. Patients want them because they provide a more immediate effect than exercise or dietary changes. And this unnerving statistic: The U.S. only makes up around 5% of the world's population, but we consume 80% of the world's opioids.

All the while, the human costs are adding up.

What opioids do to your body

Addiction: Derived from the poppy plant, opioids are a family of drugs — including heroin — known to produce euphoric effects. In synthetic form, such as oxycodone and fentanyl, opioids are often prescribed to treat pain.

When opioids enter the body, they make their way to the brain, where they're converted into morphine. Then, they bind to certain receptors in the brain, and stimulate the release of dopamine — a chemical that relieves pain and makes you feel happy. That feeling of intense pleasure is the reason why opioids are so addictive.

The No. 2 problem: They also cause constipation. "Opioids bind to opioid receptors in the gastrointestinal tract and slow down the progress of food through the bowel," Dr. Elizabeth Drew, Medical Director of Summit Behavioral Health, told Mic via email. "This happens to everyone who takes opiates, unless they have another GI condition that may counter it."

"It slows down transit time," Dr. Ruth Potee, a Massachusetts family physician and the Opioid Task Force's medical advisor, told Mic. "It's almost like a paralyzer of the gut."

This unpleasant side effect is so common among people who take opioids, there are numerous Reddit threads dedicated to discussing the ailment.

The poop issue is real: "I've never been so happy to dook before in my life," one commenter wrote. "Sometimes you go so long without an appearance, you start to wonder if the lbs of food you've eaten for a week straight just went into some empty black hole or if it will surely reappear soon."

When the poop is finally ready after days of constipation, it can be a painful, even frightening, experience. "Always scared when it's time to shit," one commenter wrote.

"I just hate when that day finally comes and it is so fucking painful," another said.

This ad "should be a wake-up call" for medicine, doctors say

Last night's Super Bowl ad revealed one way to treat the problem: more medication. But for medical experts like Potee, it's not an acceptable solution.

"In general, adding more pills to manage the side effects of the pills you take doesn't seem like smart medicine," she said.

If your opioids give you painful side effects, perhaps the best way to solve the problem is to not be on opioids at all, Nelson suggested.

"I think it should be a wake-up call, honestly, for the medical establishment — that that we've created such problems with the medications that we use, that we need to have a drug like this to treat this side effect," he said.

"In reality, most of these people should probably be titrated off their medications," he continued, "which is a much more holistic way of treating the problem."

There a host of holistic ways to treat chronic pain that don't involve addictive drugs, including yoga, massage, meditation and physical therapy. But there are problems with propagating those strategies, Hebble said. Namely, yoga studios and spas tend not to have multimillion-dollar budgets to spend on Super Bowl commercials. And then there's the matter of health insurance, which may not cover a $150 massage as readily as a bottle of opioids.

In a perfect world, Hebble told Mic, pharmaceutical companies and health insurance companies would use their money to promote awareness about the dangers of opioids, or to help underserved communities obtain access to more holistic treatments. "We need to move away from 'there's a pill for everything!'" she said.

Potee suggested Big Pharma put its big budget "toward doing good research toward drugs that make a difference, like a pain medication that isn't addictive."

That $5 million Super Bowl ad budget, Potee said, "could have gone that way — toward helping people."