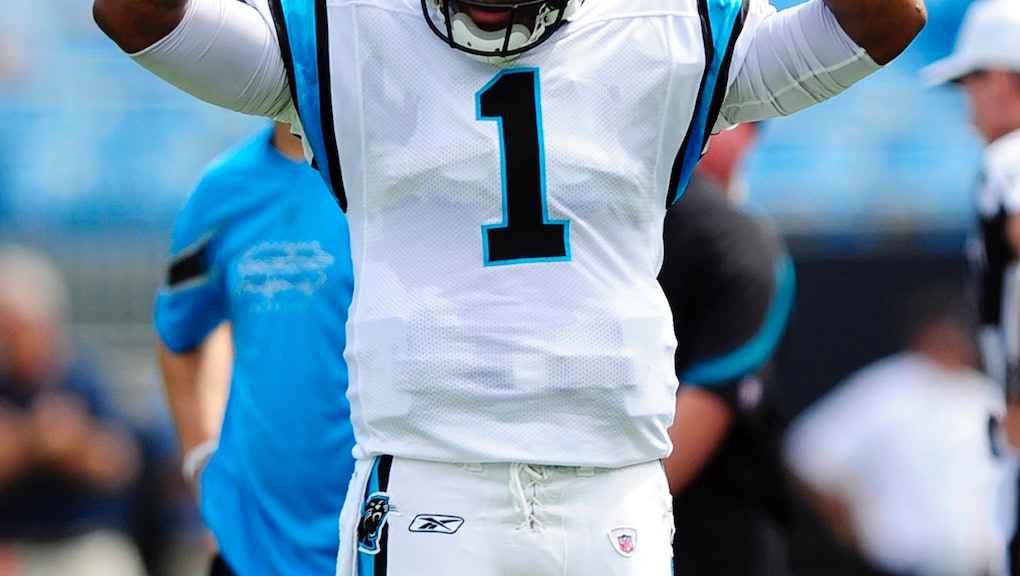 The racial overtones of Sunday's Super Bowl matchup were never much of a secret, but things boiled over when ex-Denver Broncos linebacker Bill Romanowski tweeted this after the game:

"You will never last in the NFL with that attitude," he wrote. "The world doesn't revolve around you, boy! #CamNewton."

Needless to say, the people of the Twitterverse were none too pleased:

Romanowski later deleted the tweet and issued an apology, saying he only meant the Panthers quarterback needed to "grow up":

But language is important, especially in the context of American race relations. And as Twitter user Cameron Climie pointed out, using the term "boy" when referring to a black man in the U.S. "ain't so much a dog whistle as a foghorn."

"There's history behind it": Newton, the exuberant 26-year-old quarterback for the Carolina Panthers, is black. When his team lost to the Peyton Manning-led Denver Broncos by a score of 24-10 on Sunday, Newton did what any athlete who derives competitive energy from his emotions would do: He showed disappointment.

"He appeared in shock, like he'd never even contemplated the possibility of defeat," wrote Bryan Armen Graham at the Guardian after the loss. "He lasted only three minutes before the waiting throng ... before abruptly leaving the podium and decamping to his locker."

Newton had earned a reputation over the course of the season for his boastful, celebratory conduct on the field. His tendency to dance, dab and smile his way into opposing end zones en route to a 15-1 team record rubbed some (mostly white) football purists the wrong way — a pattern exemplified by audience reactions to his success.

"Because of where we sat, we had a close up view of your conduct in the fourth quarter," wrote one particularly indignant white Tennessee Titans fan in an "open letter" to Newton after attending a game with her 9-year-old daughter earlier in the season. "The chest puffs. The pelvic thrusts. The arrogant struts and the 'in your face' taunting of both the Titans' players and fans. We saw it all ..."

"Unfortunately," she continued, "what you modeled for [the millions of kids who watch you every week] today was egotism, arrogance and poor sportsmanship."

And Michael Powell at the New York Times said he "decided to act in his moment of truth like a 13-year-old."

Although it's not rare, this kind of criticism has also been condemned as emblematic of a double standard: Black athletes — from the Michigan Wolverines' "Fab Five" basketball team to Newton and back again — often face heightened backlash from critics for the slightest transgressions or displays of emotion.

But the infantilizing tone Romanowski used in his tweet speaks to a darker history. Through much of the 20th century, white Americans — especially in the Jim Crow South — used the term "boy" in reference to black men as a symbol of their perceived superiority. The most telling visual reflection of this history can be found in the signs held during a 1968 sanitation workers strike in Memphis, Tennessee, where a crowd of black men marched with posters that read, "I am a man."

Even today, whether explicitly intended or not, the term "boy" hearkens back to that legacy — a legacy that may not be as distant as we'd like to believe.

Of course, it's also important to consider the source: If anyone has no business telling other athletes how to behave, it's Romanowski. Over the course of his 16-season NFL career, Romanowski managed to kick an opponent in the head, spit in the face of another, break a third's jaw during an illegal helmet-to-helmet hit, throw punches at a fourth, throw a football at the groin of a fifth and, finally, force one of his own teammates to retire after ripping his helmet off and shattering his eye socket with a punch to the face during a scrimmage.

Not to mention he's recently joked about hitting Newton as hard as possible on the field and choking him until he couldn't breathe. How's that for mature conduct?