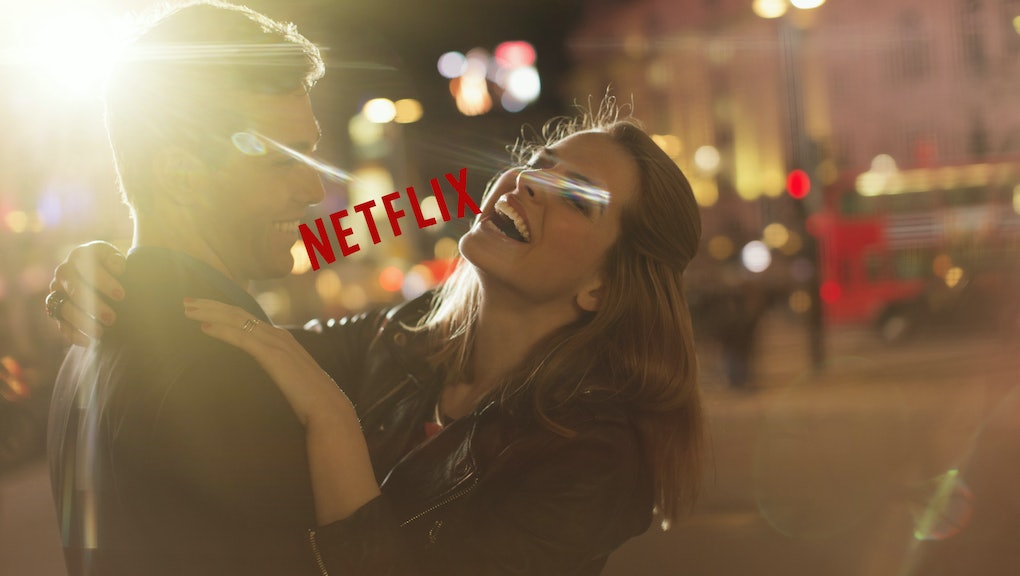 There are certain milestones that occur throughout the course of any romantic relationship — first date, first kiss, first boinky-boinky, first time you unapologetically let a fart rip, etc.

But once your new partner emails your heart and finally gets the password to your love and devotion, there's another, more literal password that you'll probably share, one that's becoming a universal signifier of closeness and trust in any modern relationship: the Netflix login.

Just in time for Valentine's Day, Netflix has taken it upon itself to conduct a survey re: how couples connect over its own video streaming service.

After surveying more than 1,000 18- to 39-year-olds, the company found that some people (27% of those surveyed) place importance on "show compatibility" when selecting a mate, and others (25%) believe that a potential partner's viewing preferences can make them more (or less) hot. The company named the latter phenomenon "show goggles," in which a guy's smart and #masc love of ESPN's 30 for 30 documentary series, for example, could help compensate for the fact that he's maybe kinda ugly or something.

Netflix also coined the phrase "Netflix Official" for that v. serious stage in a romantic relationship where you decide to consolidate Netflix accounts and share a single password (presumably something like "We@re$OinL0ve!") together.

According to the survey, 51% of participants "believe sharing a Netflix password means the relationship is serious," while 17% refuse to share a password before getting engaged (for... religious reasons, maybe? Idk).

While it's not exactly surprising that Netflix would self-importantly conclude that it is a big part of peoples' relationships (#humble #blessed), the takeaway is also kinda true. During these modern times, in which choosing a romantic partner typically means choosing a binge-watching partner as well, streaming passwords have indeed become symbolic of at least some kind of commitment.

"Sharing passwords to video-on-demand sites is a telling step in contemporary coupling — a contemporary version of leaving an extra toothbrush in your partner's bathroom," wrote Christina Cauterucci in Slate last year. "However small, it's a gesture of trust and generosity; it suggests that you'll spend more time together than apart. On streaming platforms that keep track of users' viewing histories, it becomes a tiny window into your partner's desires and habits."

And it's not just romantic relationships that password sharing is infiltrating — Netflix password-sharing is known to be a common occurrence among friends, especially if those friends happen to be teens.

So not to be all Grim Reaper-y or anything, but what happens when you and your beloved break up after already taking the Netflix-official leap? Well, if an ex holds on to the shared password after the breakup, it won't be long until your "Continue Watching" category is chock full of unnecessary reminders of your failure to make love last.

This was the case for 21-year-old Claire Landsbaum, who told the Daily Dot last year that it took her ex-boyfriend's 12 episodes of Anthony Bourdain: Parts Unknown popping up in her feed to realize that although they may have finished executing most formalities of the breakup, the tiny little connection of a shared PW still lingered. "That's what you do when you're in love," she told the site. "You give your password away."

Something to keep in mind before impulsively making things Netflix Official this Valentine's Day.