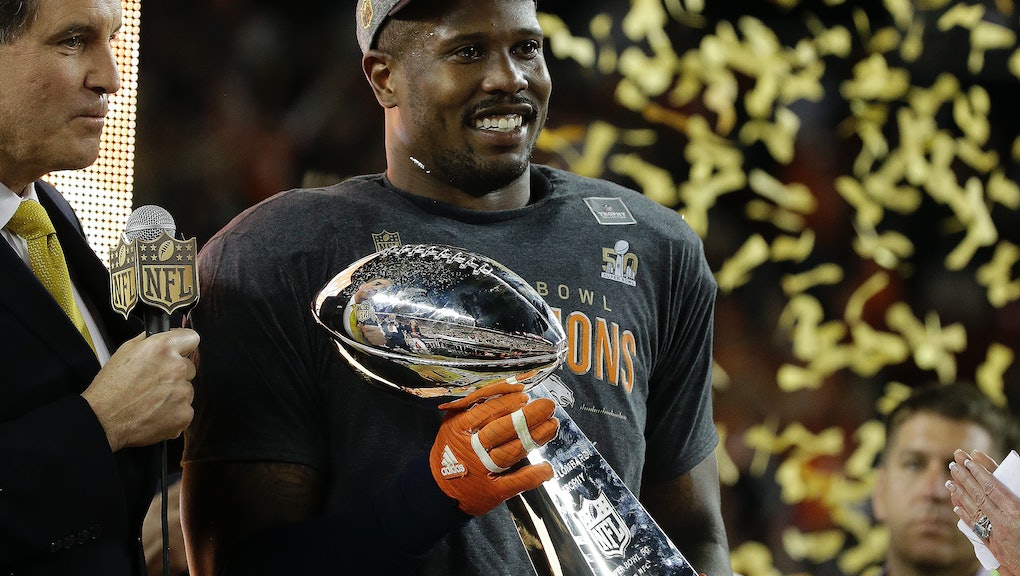 Who Is Von Miller? A Quick Guide to Super Bowl 50's Most Valuable Player

At Super Bowl 50, the Denver Broncos — and specifically, their stout defense — handily defeated the Carolina Panthers 24-10. Throughout the game, Panthers quarterback Cam Newton struggled to find time to throw, had little room to run and was sacked six times by the Broncos defense. While the entire Denver defense had an excellent performance, Broncos linebacker Von Miller took home the coveted Super Bowl MVP with 2.5 sacks and two forced fumbles in the game — a rare feat for a defensive player.

Miller is the 10th defensive player to be named Super Bowl MVP in the game's 50-year history and only the fourth linebacker. "He's tremendous, but we expect nothing less," defensive lineman Antonio Smith said, according to ESPN. "He's one of the most dynamic pass-rushers in the league. When he turns it on and he's healthy, nobody's going to stop him."

While Miller might have received name recognition from non-sports fans, the fifth-season player has had a successful NFL career thus far, despite one season in which the linebacker dealt with injury and suspension for violating the NFL's drug policy.

Miller was from the same draft as Newton — the NFL's 2015 season MVP. In fact, Miller was picked second overall in the 2011 draft, right behind the Auburn University quarterback. Though Newton had a great rookie season in his own right, Miller was equally impressive, earning AP Defensive Rookie of the Year for his 11.5 sacks and two forced fumbles on the year.

However, 2013 was a year of frustration and controversy for the linebacker. Miller was initially suspended for four games for violating the NFL's substance abuse policy at the beginning of the season — though it was later increased to six games after the NFL discovered that Miller tried to corrupt the drug test with the help of a urine collector, according to ESPN.

According to the report, Miller and the collector had attempted to swap out his urine sample with another person's, but was caught when a second collector discovered that the linebacker was not in the same city where the test was supposed to take place. Unsurprisingly, the employee who conspired with Miller has since been fired, according to USA Today.

Miller then tore his ACL in a game against the Houston Texans in December 2013, which prematurely ended his season. Of course, it was a tough blow for the Broncos, but in the tradition of post-injury interviews, Broncos players and coaches took the "next man up" rhetoric with regard to the team-wide effect of Miller's injury, USA Today reported. "Any time you take any of those caliber of players, it's a blow," then-head coach John Fox said, according to USA Today. "But, next men up kind of approach. Our guys will deal with it, and we have to."

Miller's injury didn't stop the Broncos from reaching Super Bowl XLVIII, but the team was promptly blown out by the Seattle Seahawks, 43-8. How, and if, Miller could have affected the team's defensive performance is unknown, but the Seahawks' resounding victory makes it unlikely that it would've made a difference.

This year, however, Miller's presence was felt from the Panthers' second drive of the game, when he sacked Newton and stripped the ball, which got into the hands of defensive tackle Malik Jackson for the score. The play was the embodiment of Miller's fifth NFL season: He'll rush the quarterback and create havoc for the other team's offensive linemen. "From the moment Miller arrived in Denver with the second pick of the 2011 draft, his coveted ability to turn speed to power, power to speed has been on display," Jeff Legwold wrote for ESPN.

None greater — or more on display— than in Super Bowl 50.

Check out the highlights from Miller's Super Bowl MVP performance below: