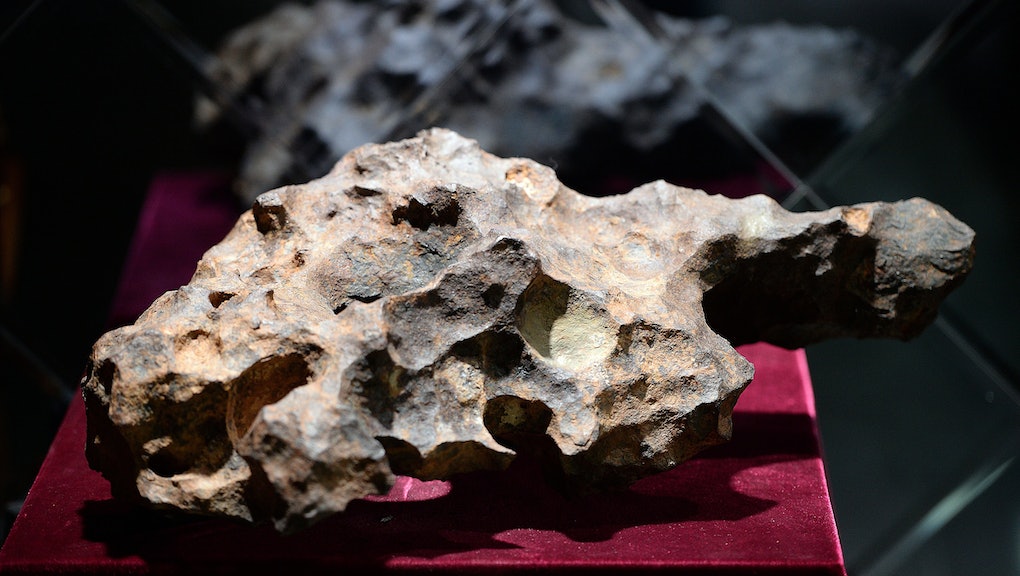 Despite Incredible Odds, a Meteorite May Have Actually Killed a Human

The chances of dying at the stone cold hands of a meteorite are incredibly low — about 1 in 700,000 over the course of a person's lifetime, according to astronomer Alan Harris — but one man may now have the extremely morbid distinction of being the first person in modern history to die this way.

According to various reports, a 40-year-old bus driver in southern India's Vellore district was killed after a space rock crashed into an engineering school's campus. The Times of India reported the meteorite made landfall on Saturday and injured three other people.

It reportedly left behind a crater measuring 5 feet deep and 2 feet wide; police also found a "black, pockmarked stone" weighing about one-third of an ounce, according to the Times of India.

While government officials have declared the meteorite responsible for the man's death — and are providing monetary compensation to both his family and the other three victims — scientists have yet to confirm the cause.

According to Sujan Sengupta, an associate professor at the Indian Institute of Astrophysics, the chances of such an event are "extremely little," he told the Wall Street Journal. "If a bigger asteroid enters the Earth's atmosphere, it will disintegrate and travel in different directions and because most of the Earth's surface is covered in water, it is most likely to fall into the ocean," he said.

Though meteorites have inflicted earthly damage before, NASA is adamant that they pose little risk to humans. "It is a fact that there is no record in modern times of any person being killed by a meteorite," the agency said on its website.

Still, officials in India have ruled out other causes, including explosives.

"We did not find any trace of explosive substances, so we ruled out the possibility that explosives caused the blast," one official told the Times of India. "We will wait for a final autopsy report on the body ... and the report from the forensic lab to confirm what triggered the explosion."

A police officer noted that experts from the Indian Institute of Astrophysics in Bengaluru would be called in to investigate whether the black rock came from a meteorite.

The Times of India detailed what happened following the impact:

The blast — which took place during class hours on Saturday when students, teachers and other staff were within the college's main building — shattered several windowpanes and damaged the windscreens of buses parked nearby. Police said [the victim] went to wash his face at a tap near a water tank in the parking lot of the college when the explosion occurred around noon on Saturday. Thick smoke engulfed the area, witnesses said.

In 1954 Ann Hodges became the first — and, officially as of yet, only — person in recorded history to be struck by a meteorite. Hodges, who lived in Alabama, was left with a "pineapple-shaped bruise" after a rock came hurtling into her living room, National Geographic reported in 2013.

In February 2013, three years before the incident in Vellore, the Russian city of Chelyabinsk was the site of a meteor explosion that injured roughly 1,500 people and caused a mountain of damage to nearby buildings.

Following the explosion, experts cautioned that Earth could be in store for more meteorite events.