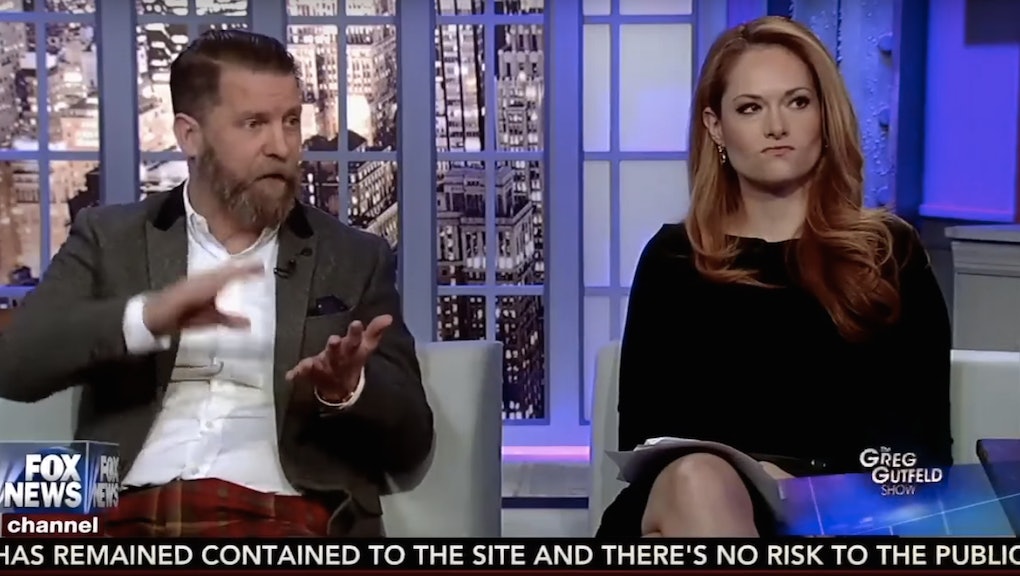 Fox News is no stranger to bizarre and controversial interview subjects. In past years, the network has spoken with the Westboro Baptist church, the head of the Communism Party USA and, of course, the creator of Dilbert. Few guests, however, have consistently managed to raise as many hackles as Gavin McInnes.

During Saturday's episode of The Greg Gutfeld Show, McInnes, a co-founder of Vice media who left the company in 2008, launched into an extended rant on a subject for which he has achieved infamy more than once: women. More specifically: women registering for the draft. When the show's host floated a hypothetical of women as the primary soldiers in the U.S. Army, McInnes took the bait.

"If we're going to do that, we'll have to talk to President Hitler," he said. "Because if women were soldiers for the past hundred years, we would have lost World War II."

Fellow guest Gillian Turner interjected that were Gutman's hypothetical the case, the U.S. would have engaged in "half as many wars" because women are "not naturally war-makers," only to be shouted down by McInnes, who scoffed at the idea of women as peace-seekers. Seemingly taking Game of Thrones Lady Melisandre as a guide, McInnes cited "pagan days," noting that "all you guys were doing was sacrificing babies and virgins."

The most charged moment came when McInnes bemoaned the state of modern man, and warned that it would be no picnic for women to be treated equally.

While there is some evidence that sexual assault in prison is predominantly a male problem, what McInnes ignores is that U.S jails and prisons are predominantly populated by men, thus creating more overall male rape victims. And he fails to mention that, at least in the case of inmate-on-inmate violence, women are twice as likely to report incidents of "sexual victimization," according to a 2010 report from the Bureau of Justice Statistics.

McInnes has frequently peddled misinformation in a seemingly deliberate attempt to set the world frothing. In a 2015 interview with Sean Hannity, he weighed in on the wage gap, telling fellow guest Tamara Holder that she was unhappy and would be "much happier at home with a husband and children." And in 2014, he was forced out of his position with the advertising agency Rooster after publishing a piece supporting transphobia on Thought Catalog, which ultimately removed it and replaced it with a veritable wall of shame. (Read the original story here.)

But with each McInnes outrage a surefire source of attention, it's likely Fox will keep him on their guest list for many years to come.