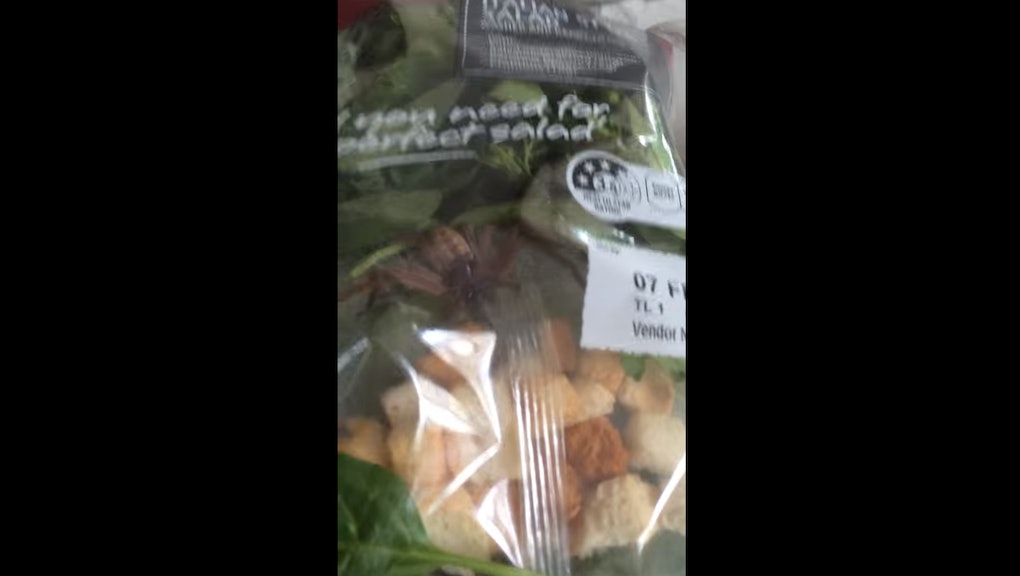 Coming to a nightmare near you: This terrifying video of a gigantic spider biding its time — presumably before committing a violent crime — in a bag of salad that looks a little too similar to the ones in our local supermarkets.

Australian YouTube user Rick Perry fortunately spotted the eight-legged freak before he opened and ate the bag of salad, which carries a label assuring that its non-spider contents were "washed and ready to use," a consumer-facing promise that can easily be construed as "not containing a huge-ass spider."

The salad appears to be from Australian brand Woolworths, which coincidentally issued a recall of loose-leaf salad ingredients after a growing salmonella outbreak sickened dozens of people.

As FoodBeast reports, the spider in question appears to be a huntsman, which is also noted by someone in the video.

Huntsman spiders are not aggressive and are minimally toxic to humans, according to a site run by the Fumapest Control Group, but they are, however, maximally terrifying.

While the average consumer probably won't come across any such terrors lurking in their food, that shouldn't serve as much consolation — most people eat between 1 to 2 pounds of small insects each year in the form of dead insects and bug parts concealed in otherwise normal-looking food products.

Hopefully, Perry chose to release the critter outside rather than compound its unjust imprisonment with the business end of a shoe — regardless of humanity's negative view of spiders, they provide valuable biological pest control services and play an important role in agriculture.

In short, we want that spider in the wild, not in our salad.