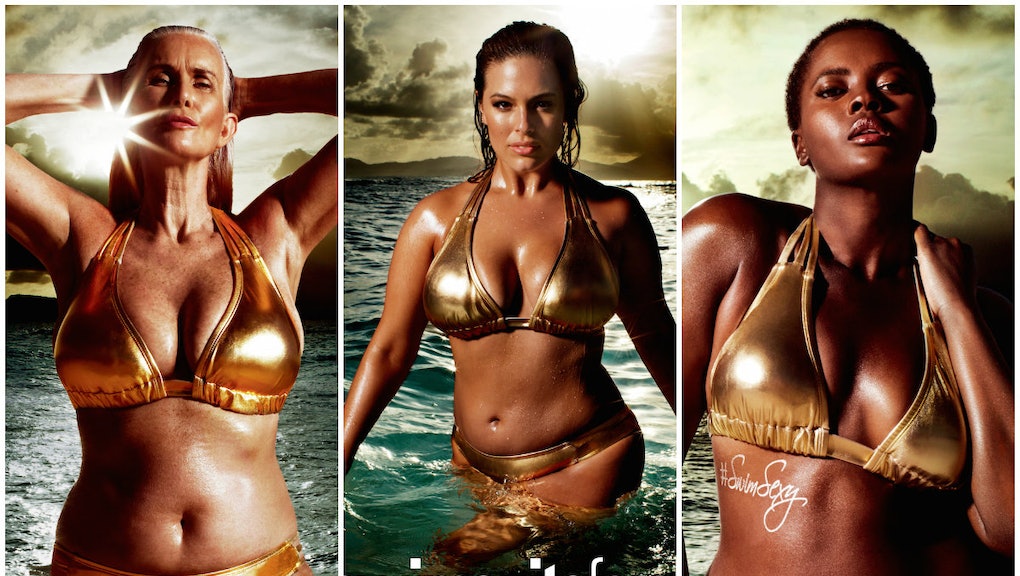 This year, though the issue will definitely have all of that, it comes with the added bonus of a history-making ad. Open it up to Swimsuits for All's #SwimSexy ad campaign, and this is what you'll see:

Three women, whose sizes, ages and races vary, all posing in the same metallic gold bikini by Swimsuits for All, a bathing suit company that caters to larger sizes. And all are striking that classic sexy pose.

For one of the models, it's actually not her first time at the swimsuit issue rodeo. Sports Illustrated revealed Tuesday that Ashley Graham is one of its rookies of 2016, and she also pops up in the 2016 issue in a Lane Bryant ad. She also appeared in a Swimsuits for All ad in the 2015 swimsuit issue.

As for the other two models? British-Ghanaian model Philomena Kwao strikes a pose, as does model Nicola Griffin, who at age 56 is reportedly the oldest woman to grace the pages of the swimsuit issue.

Their presence proves that sexy has no size or shade or race requirement, and that a gold bikini can look fantastic on everyone. That's especially important for Griffin, who told Mic she's "a proud mother and thrilled that [her] body reflects that."

"I hope that my presence in #SwimSexy will make the public think about how society has determined what makes someone beautiful and sexy," Griffin said. "Rarely do you see older women in fashion campaigns, and I am pleased that #SwimSexy shows people that women of all shapes, ages and walks of life are gorgeous."

Representation in widely read publications such as Sports Illustrated matters, and nothing shows that more than Kwao's own story of how she she learned the swimsuit issue was even a thing.

"I didn't even know what Sports Illustrated was until I moved to New York a few years ago," Kwao told Mic. "When I finally discovered the Sports Illustrated swimsuit issue, I browsed through archives and saw a picture of an incredibly stunning model, Damaris Lewis. Her images inspired me and I imagined being in the magazine myself. Never in a million years did I dream it would actually happen."

Seeing a model she identified with was huge, Kwao said, especially coming from Ghana.

"In Ghana, most of the women I know do not identify as sexy, and the reason may be cultural," Kwao said. "With imported beauty standards from the West, it seems that many African women feel they need to be fair and slim to be beautiful. I hope this campaign in Sports Illustrated will change that."

Kwao said she hopes her presence in the magazine can change the conversation from, "Wow, look at her," to "Wow, I am her."

"I want young girls to look at the campaign and see confidence," Kwao said. "We are bigger girls than the standard swimsuit models, but here we are wearing bikinis. We aren't covered up and we're happy. I'm especially excited for young black girls who are also curvier to see the campaign, as the fashion industry has been slow to showcase curvy models of color."

It's been slow, but it's happening. In June, Target launched a swimwear ad campaign featuring models of all shapes and sizes. In December, Target Australia did the same, following it up with a size-inclusive campaign for lingerie in early 2016. And in January, American Eagle's lingerie offshoot Aerie cast a "curve model" for ads sans photo editing. Companies are finally acknowledging what women look like and what female shoppers want to see.

"I wish that when I was 12, 13 or 14, that I was of this generation that's happening right now because it would have boosted my confidence to a whole other level and I would've really truly loved the skin that I was in," Graham told Mic at an event in January celebrating her campaign for the denim company NYDJ.

Now it's happening, in the very magazine known for its idolization of beautiful female bodies.

As Kwao told Mic, "Change is coming, and it's exciting!"