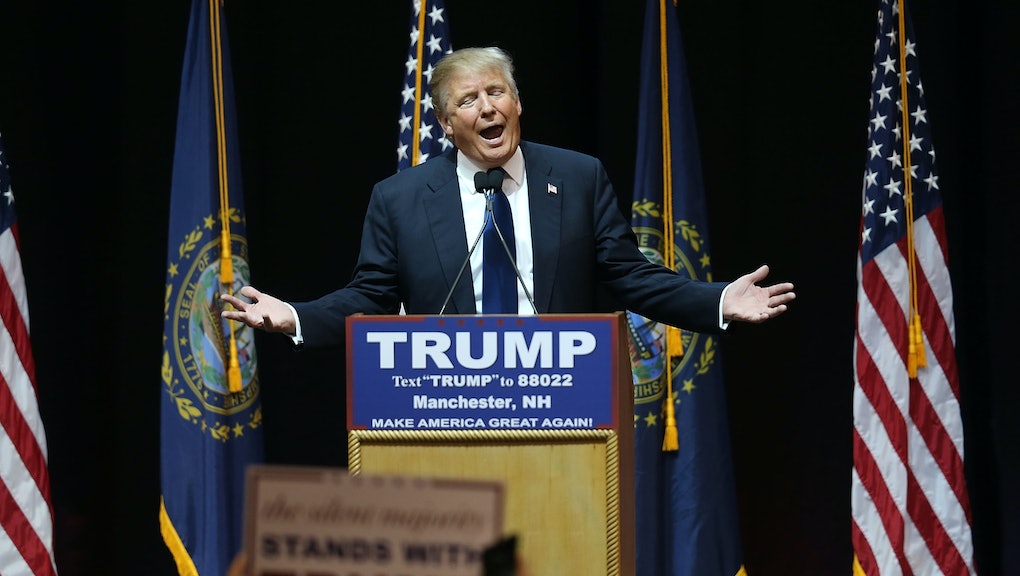 Is there any happier image than children's smiling faces? Imagine Mr. Tell-It-Like-It-Is Donald Trump yelling in those faces, "You're not welcome here."

That's exactly the picture that the 2016 Republican presidential candidate painted for New Hampshire voters at a campaign event on Monday.

A voter from Greenwich, Connecticut, told Trump that the city has been very welcoming to refugees and then asked the business mogul whether he could look into the faces of some of these children and tell them that they're not allowed to enter the country.

Well, to Trump, the clear answer was a resounding "yes."

Trump said that he sought counsel with some of who he called the "greatest" political advisers and security officials before going on to say that we have no way of knowing the origins of any of the incoming refugees.

Trump then repeated a famous — and incorrect — statistic that he's said before: that the majority of Syrian refugees are strong, able-bodied young men. However, of the estimated 4.6 million Syrian refugees worldwide as of Dec. 31, 50.7% are female and 51.8% are 17 or younger, PolitiFact reported.

Trump then began a rant about refugees who have cell phones. He said some refugees' cell phones have ISIS flags and "a lot of bad stuff on them."

"Where the hell do they get their cell phones?" he asked. "Who's paying the bill for the cell phone?" Trump continued his circuitous answer to the question, even mentioning Saudi Arabia and the nation's debt at one point.

How to deal with the Syrian refugee crisis has been a constant question during the presidential campaign since the bombing attacks in Paris in November. Since then, a long list of governors have come out against welcoming refugees, though some mayors have opened their doors to those seeking refuge.

President Barack Obama decried Republican efforts to stop Syrian refugees from entering the United States. Several 2016 Republican presidential hopefuls in addition to Trump — such as Sen. Ted Cruz, Sen. Marco Rubio and former Gov. Jeb Bush — have made statements with varying degrees of harshness regarding the refugees. The U.S. House of Representatives voted in November to ban refugees from entering the U.S. unless they pass a stringent background check.

Watch Trump's more-than-four-minute answer to the question below.