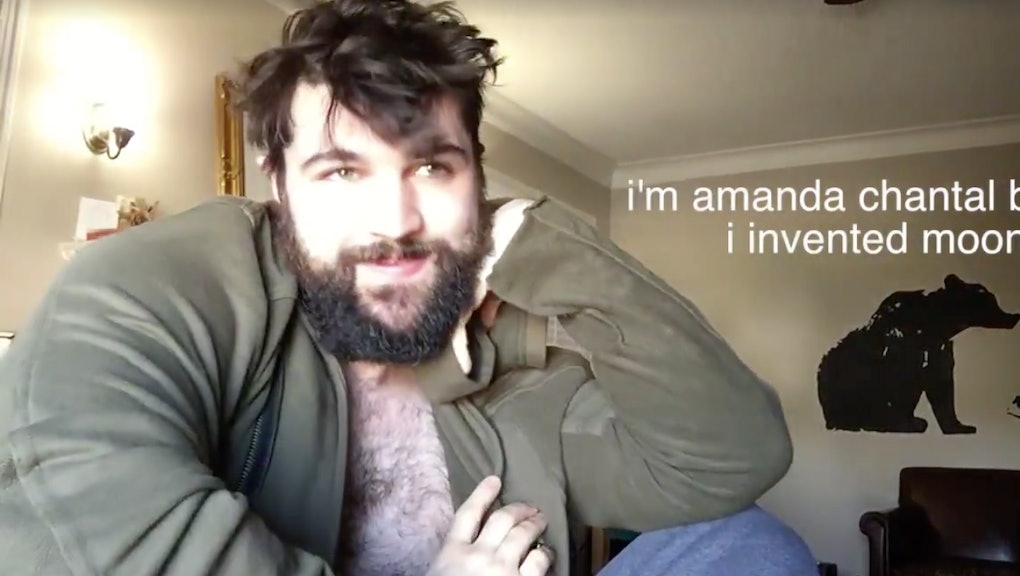 Chances are, over the weekend you or someone you know read the recently-resurfaced food diary of juice bar owner and unreal person Amanda Chantal Bacon, the creator of Moon Juice. If you did, there's also a great chance you had strong feelings about it.

Bacon's rundown of her daily food consumption, which was published on Elle.com back in May 2015, includes starting the day "with some Kundalini meditation and a 23-minute breath set." At 8:00 am, she downs some "libido-boosting powers of Brain Dust and Shilajit resin," which does not sound all too appetizing. Bacon caps off her exhilarating day of eating literal bee pollen with a nightcap of "heart tonic and raw chocolate made from one of my big batches — this one was made with our Moon Pantry heirloom raw cacao, reishi and Chaga mushroom."

We, along with many others on the internet, have no fucking idea what most of that means — especially actor and comedian Jarrett Sleeper, who created a now-viral video breaking down the food diary and what it would actually cost.

"Hi, I became obsessed with Amanda Chantal Bacon, the inventor of moon juice, and what she eats in a day," Sleeper writes under the video, posted on Facebook on Saturday, "... so I made a video to exorcise it, enjoy or be appalled or both either way thanks love you."

And so he begins, shirtless in his apartment and with great earnestness...

There is just something deeply pleasurable about seeing a burly, non-fitness model man say something like "I chase it with three quinton shots."

Oh, and for comedic effect, he continuously notes "I'm Amanda Chantal Bacon" — because the irony that her last name is just too rich.

Other than seeing someone affectionately and exasperatingly pronounce his love for chia seeds and green tea, the most important point of all is Sleeper's "money tracker," whereby he keeps track of how much money Bacon was theoretically ingesting along with all that bee pollen.

Want to know how much her daily food intake costs? Are you absolutely, positively sure that you do?

The video has over 480,000 views, clearly tapping into some floating aggravation many of us have over Instagram star's healthier-than-thou lifestyles. But as you scroll through your feeds and feel that exasperation blended with intimidation, no need to throw intense vitriol at that person — just get it all out in a video, and don't forget to treat yourself today to some Shalijit resin today.