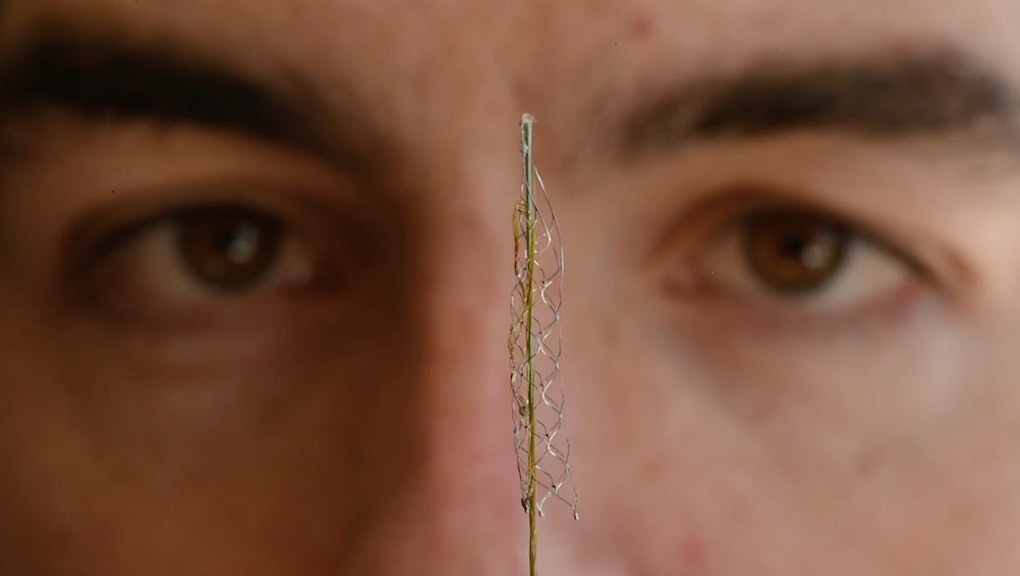 The quest to give patients with paralysis the ability to walk is on the verge of a breakthrough — and it could come in this tiny package.

It's called a stent-electrode recording array, and it has been used for the last few years to treat neurological conditions, according to a paper by University of Melbourne researchers. But a 39-person team from 16 of the university's departments think it could be used to make people walk again. Best of all, implanting it is far less invasive than brain surgery.

The stentrode fits inside a 1 millimeter blood vessel and looks like a tiny cigar made of wires. It's rigged up with electrodes that can record brain wave activity. Instead of the traditional way to get to the brain — an open craniotomy, removing a piece of skull to expose the brain — the stentrode gets sent through the groin via catheter.

From there it goes to a blood vessel near the motor cortex, which is the part of your cerebral cortex that controls voluntary muscular activity like walking, whipping and Nae Nae-ing. The device then intercepts brain signals and delivers them to the patient's robotic exoskeleton with a wireless connection.

Here's how researchers from the University of Melbourne, with collaborators from Royal Melbourne Hospital and the Howard Florey Institute for Neuroscience and Mental Health, describe how the stentrode would work for humans:

The team, which published its paper in the journal Nature Biotechnology, has already seen positive results in animal trials.

What's most exciting is that after a little less than two weeks, researchers said, the brain signals the stentrode received were as strong as the ones doctors got after putting patients through difficult, invasive brain surgery.

"There is no craniotomy, no risk of infection, it's all run through the groin and passed inside the body up into the brain," University of Melbourne Professor Terry O'Brien said in a press release.

The key use of such a breakthrough in technology is to help people who are paralyzed from a stroke or spinal cord injury. But the implications for military or emergency personnel are great: Anyone hooked up with a stentrode and exoskeleton could carry massive weight, like crates of medical equipment and food, into areas where vehicles can't pass and aircraft can't perform drops.

However, soldiers, medics and cyborg strongmen will have to wait a bit. The test patients won't be implanted until 2017, and researchers on the project say being able to move with thought power probably won't be accessible on the market until 2022.