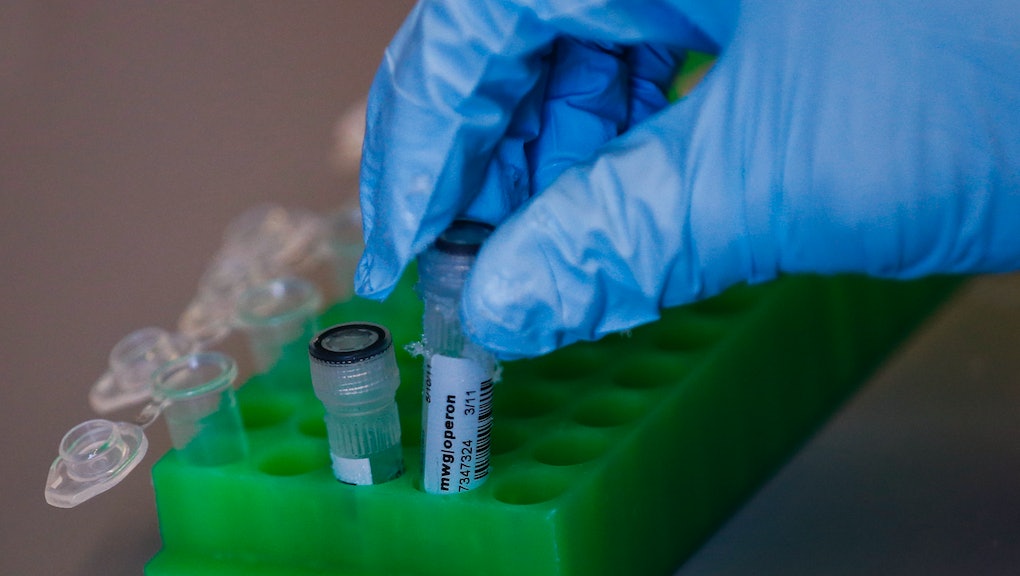 The race for curing cancer by treating our DNA is heating up.

A new report from Grand View Research predicts cancer care genomics, the study of DNA sequencing and function, will be worth $9.22 billion by 2022. In 2014, the study was worth $9.2 million.

Why did that value spike so much? You can probably thank the market's three extra zeroes to the small-shop industrialists and academics who are figuring out what gene editing can do (beyond growing a bunch of vegetables).

We're talking about Earth-shaking, global-crisis-ending breakthroughs like the treatment of cancer and HIV.

How it works: "Genome editing is showing promise in modifying or knocking out cell receptors so they might not be able to accept a viral infection," Doug Brough, chief science officer at the biotechnology company GenVec, told Mic. "It could knock out the body's HIV receptors. In the cases where there's a dominant negative protein that gets expressed, you can think about knocking that down."

CRISPR/Cas9, a gene editing technique thought of as nanoscale scissors for snipping DNA sequences, could be dulled and used instead as a sort of remote control to switch on and off different genes. Even pharmaceutical mogul Bayer recently announced it would team up with bio startup CRISPR Therapeutics for a $300 million venture to find ways to make CRISPR a more accurate method of gene editing.

"With CRISPR, you can go in and turn up the cancer cell's ability to respond to its death cues, and turn down its ability to grow quickly," Maria La Russa, a doctoral candidate in Stanley Qi's lab at Stanford University and a graduate student at the University of California, San Francisco, biomedical sciences program, told Mic. "Think of genes as a mini factory with various levels of activity. You send the genes messages with the dead Cas9, saying things like turn up production if it's too low or turn down if it's too high."

The next big thing in medicine: Since 2014 there's been a skyrocketing demand for the following methods: nucleic acid extraction and purification, microarrays (genes affixed to a solid object), polymerase chain reaction (generating a ton of copies of a DNA sequence) and genome sequencing, which accounted for roughly a quarter of the study's value in 2014.

Whether it's money thrown at mapping the genome, copying DNA or trying to switch off cancer, companies are competing to figure out how to use genetics to cure a disease that kills 20,000 people daily, and they're willing to spend a lot of money to figure out how to do it. That's good news for us.