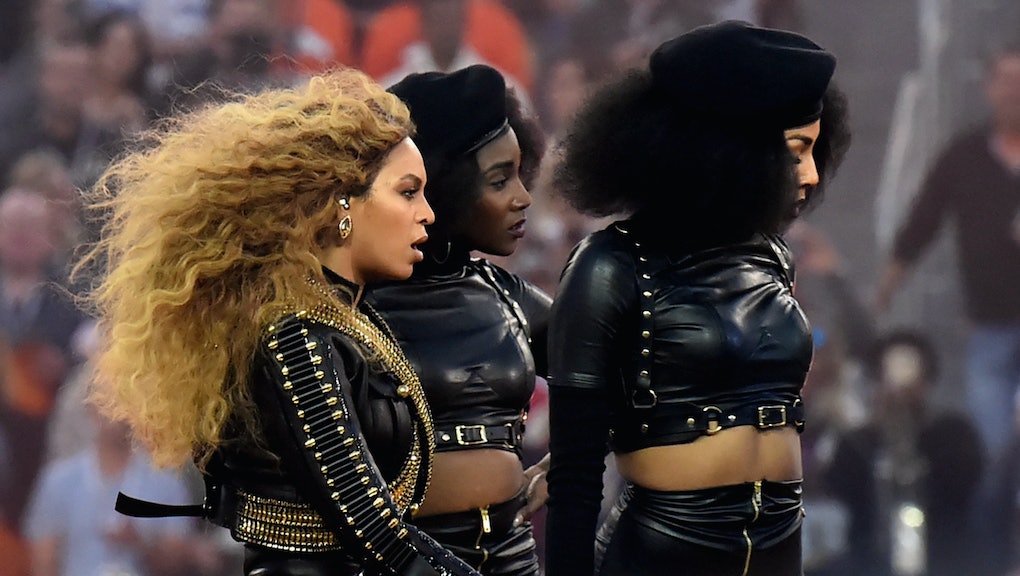 In some ways, Super Bowl 50 was February's answer to January's State of the Union — a litmus test of sorts for where the United States stands not on policy and foreign affairs, but on representation and equality.

And, much like the annual presidential address, the Super Bowl comes with hard data. This year, viewership was just shy of an even gender split, with women making up 46% of viewers.

But didn't mean the ad industry was any more interested in appealing to its female demo.

Read More: The Internet Is Really Skeptical About That "Super Bowl Babies" Ad

The good news: 41 of the 55 ads that aired during the game featured women. The bad news: Women didn't have a single line in 56% of them, according to Motto. In the 29 commercials that had voiceovers, women only did two of them. And quarter of commercials were 100% women-free. (Only 5% contained no men.)

Here's how the rest of Super Bowl 50 stacked up:

Hyundai ditched the tired trope of female objectification and misogyny, which make frequent cameos in car commercials. Take 2010's Super Bowl ad in which Dodge touted it's latest Charger as "man's last stand" against that nagging wife. Instead of playing up these stereotypes, Hyundai took the road less traveled.

In the ad, two women drive a shiny blue Hyundai Elantra around "Ryansville," a town populated by infinite clones of actor Ryan Reynolds. The women rubberneck as they spot Reynolds riding by on a bike, getting a ticket (and writing the ticket as the police officer) and playing a quick game of tackle football with his other selves. And as they continue to ogle the various Reynolds incarnations, the women come just shy of running him over — but are saved by the car's automatic breaking feature. A narrator delivers Hyundai's tagline, "a car that doesn't get distracted."

Female gaze for the win.

2. ... but this auto insurance ad did the exact opposite.

Cure Auto Insurance can't afford to joke about distractions like Hyundai — because they pay for them. But that doesn't give them a free pass when it comes to their ad, which cautions, "Avoid distractions." The commercial hones in on a man at the bedside of his dying father in a hospital. When, in his waning moments, the father tells his son, "There's something important I have to tell you," the son looks up to see an attractive nurse. She smiles back at him but the sound of his father flatlining jolts him back to reality.

The commercial, ostensibly meant to be funny, is actually pretty dark; but more than anything it reminds viewers that women are objects for men to look at, and men just can't help themselves. (The ad doesn't do men any favors, either.)

When Beyoncé took the field with her dancers, there were hat tips to Michael Jackson, the Black Panthers and Malcolm X during the performance of the singer's new single, "Formation." For Beyoncé, celebrating the black community and making a political statement in the process is all in a day's work; for some Twitter users, slamming her political message and calling the Super Bowl "too black" is theirs.

As haters continued to threaten a Bey boycott, her fans came to her defense. But the backlash betrayed just how far the country has to go before it fully grasps the pervasiveness and persistence of racism.

At the beginning of "A Hymn for the Weekend," lead singer Chris Martin reached out to a crowd member waving a rainbow flag. Later, Beyoncé and Bruno Mars joined Martin for a finale that ended in an explosion of colors, as the words "Believe in Love" stretched across the stadium — an unmistakable show of support for the LBGTQ community.

Twitter exploded. If Beyoncé's performance was "too black" Coldplay's was "too gay." Those who shared these opinions proved that same-sex marriage is only a small step toward social equality.

5. This Doritos ad sparked controversy within the pro-choice movement.

In the commercial, a spacey dude discovers the Doritos he's eating at his wife's ultrasound are attracting the attention of the fetus on the monitor. Dad dangles the chip as the fetus reaches for it and eventually attempts to make a premature escape.

NARAL Pro-Choice America struck back at the brand on a number of levels:

Even those who were unmoved by NARAL's pro-choice message might have vouched for the second point. The mom-to-be rips the chip out of her partner's hand and chucks it across the room, sighing, "Give me that!" Because women always ruin the fun.

6. And this domestic violence PSA showed that change is happening, however slowly.

The NFL took a stand on on domestic violence this year when they aired a commercial in partnership with NO MORE to raise awareness on the issue. Super Bowl 50 marked the second year the league spoke up about domestic violence, which has been a recurring issue among some of its star players.

Though studies waver on whether or not there are more incidences of domestic violence during the game itself, one statistic remains steady, according to the National Coalition Against Domestic Violence: 1-in-3 women and 1-in-4 men have been victims of physical, intimate partner violence during their lifetimes.

In beginning to tackle the issue, this ad was a redeeming one for Super Bowl 50.