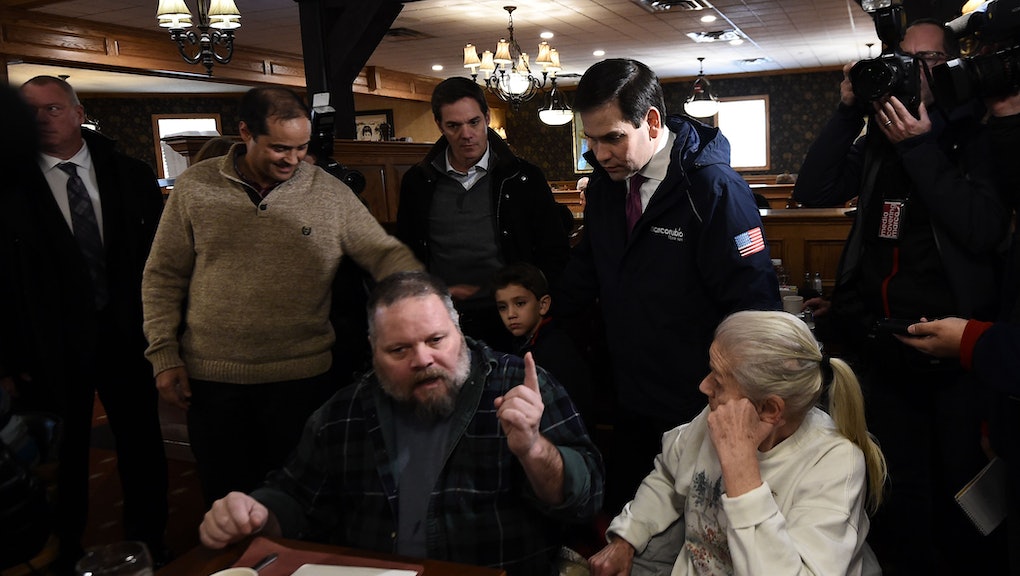 Need to know the 11 words that can get Sen. Marco Rubio to run away? Try these: "Why do you want to put me back in the closet?"

New Hampshire voter and gay man Timothy Kierstead asked Rubio just that when they came face to face at the Puritan Backroom diner early Tuesday morning, the day of the state's primary.

"You can live any way you want," Rubio said in response.

Kierstead is married and said that Rubio's position on gay marriage sends a clear message to gay voters: "We don't matter."

Rubio iterated his position on the matter to the concerned voter: "No, I just believe marriage is between one man and one woman."

In December, Rubio promised to reverse the Supreme Court ruling that legalized same-sex marriage in all 50 states.

"It is the current law," Rubio told NBC's Meet the Press. "I don't believe any case law is settled law. Any future Supreme Court can change it."

But Kierstead was not having it. "Well, that's your belief," he said.

Rubio then told Kierstead that he could work to change the law if that's what he believed — even though gay marriage is currently legal and Rubio is working to reverse that reality.

Eventually, Rubio exited the conversation. "I respect your view," he told Kierstead.

According to the New York Times, Kierstead is a restaurant owner from Manchester and registered independent who will be voting for a Democrat.

"They want to take my rights away as a citizen of the United States," Kierstead told the New York Times. "Love is love. People don't choose who they are going to love."