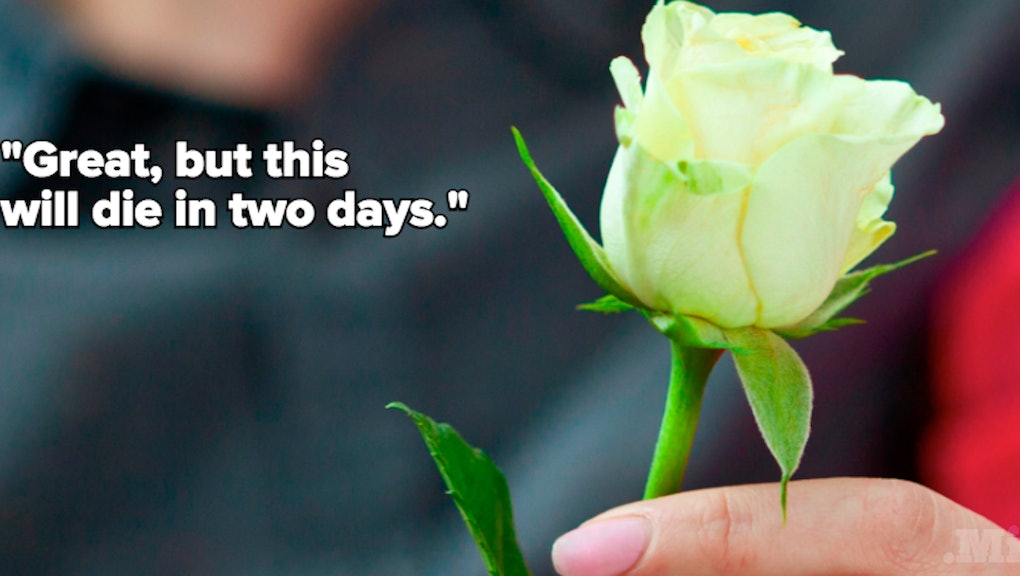 It's that time of year again: a time for flower bouquets, conversation hearts and frivolous consumer spending.

A recent Harris poll of 2,057 Americans on behalf of the website NerdWallet found that millennials are most likely to be shelling out the green on Valentine's Day. In fact, the average 18- to 34-year-old will spend a whopping $290 on their valentine this year. For real.

What, pray tell, could couples possibly be dropping nearly $300 on this February 14th? According to a 2014 National Retail Federation survey, the most popular answers are fairly unimaginative: greeting cards, candy, flowers, jewelry, a night on the town, clothing and most depressing of all, gift cards. Because nothing says "I love you, baby" quite like a $50 store credit at Best Buy.

Whether you intend to honor love or the tradition of Lupercalia itself this February, that kind of mindless capitalism probably isn't going to do much for your love life. In fact, a 2014 study from Cornell University found that the most rewarding and memorable gifts are experiential, meaning that material objects like flowers and chocolates aren't nearly as enjoyable as, say, taking a trip to a new city, or taking a wine-tasting workshop.

So instead of dropping a third of your rent on the king of Hallmark holidays, here's how else you could be spending that $290 on your relationship. (Bonus: These gifts totally work when you're single too.)

For $290, you can stay in a gorgeous Montreal loft for four nights.

A Valentine's prix-fixe meal sounds like the perfect romantic night on the town. But it could also mean $200 and two hours of "mmm"ing your way through octopus-carrot salad or Portobello mushroom mousse when you'd rather be eating a burger.

While a dozen long-stemmed roses might be the iconic fixture of Valentine's Day, as far as gifts go, this one is pretty boring. Unless you're both botanists, you probably shouldn't be spending too much money on flowers that will basically die upon entering your home.

Conventional wisdom suggests that if you get your S.O. some nice lingerie or fancy undies, chances are you're going to get laid. However, lingerie is not much bang for its buck: A fishnet cutout halter teddy is not exactly comfortable and it's probably worn for five minutes tops.

You know what will get you laid more often, though? Always having protection on hand. Research shows that couples in relationships might be a little too lax with their contraception, when they might in fact, really need to use it. You could get 23 boxes of a 36-count Trojan condom pack for around $290 — that's 828 rounds of sex, give or take.

For $290, you could learn a romance language.

Most long-term couples fantasize about a future where they're traipsing around a European village or hiking through Colombia at the hip of their bae. Why not prepare for a life of international travel by learning a foreign language? (Bonus: You won't look like an asshole when you speak English abroad.)

Group classes at national centers like ABC Languages have eight-week classes that run for $270. You can also stumble through "Donde está la biblioteca?" from the comfort of your home with a product like Rosetta Stone, which costs $209.

For $290, you can never leave bed with your new 464-thread count cotton sheets.

The very definition of a boner killer may be giving your valentine a gift card to show them how you feel. It lacks any thoughtfulness or sentiment. A Barnes and Noble gift card simply tells your partner: "I vaguely know you."

Though it may seem mundane on the surface, an actually amazing splurge and a sure-fire crowd pleaser is a brand-new pair of fancy sheets. Running for $145 each, you could get two sets of luxurious Ralph Lauren 464-thread-count cotton percale sheets for the average price of a Valentine's Day celebration. The first pair is to convert your bedroom into an oasis. The second is for when the first becomes covered in Seamless stains and bodily fluids.

For $290, you could get two high-end couples' vibrators.

While jewelry stores have tried to make their wares synonymous with "guaranteed kisses" for years, two-tone gold and Star Wars charm bracelets can only get you so far.

For $290, you could have a personal chef make you dinner for four weeks.

Breaking into a box of chocolates is sort of like playing Tinder with your mouth. Sure, there's a chance that your pharmacy-brand truffle could be delicious, but it's more likely to be repulsive.

You'll have better odds by hiring your own personal chef who will cook you and your partner (or a friend) a gourmet dinner once a week. For a price tag of $236, you can book a chef for four weeks with Kitchensurfing.com. Your personal chef will provide locally sourced, GMO-free ingredients, bring over their own equipment, cook within 30 minutes and even clean up afterward — for the ultimate in luxury lazy experiences. It will put your chocolate sampler to shame.