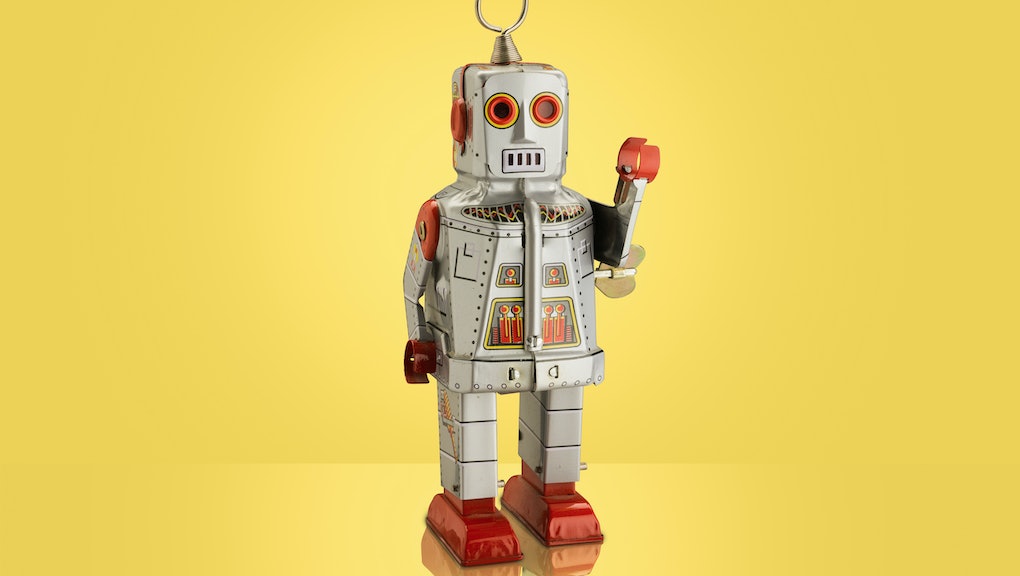 Imagine a world in which robots replace swaths of jobs, wars are fought with code and jobs continue to cluster around urban hubs.

Alec Ross was the senior adviser on innovation for Hillary Clinton when the presidential candidate served as secretary of state. Over the course of Ross' career, he's gotten a wide view of the world economy. In his latest book, The Industries of the Future, Ross describes what's next — and it's a bit alarming.

Though Ross' portrait sounds like a net loss for humanity, he contends it isn't. The future offers plenty of opportunity for everyone, as long we take action to make sure no one gets left behind in the race to automate.

Mic sat down with Ross to discuss how we'll all be employed in the future — and the robot slave class that will emerge to serve us.

Mic: What I thought was interesting about your theory on robotic labor is that no class is exempt from being replaced. For instance, anesthesiologists.

Alec Ross: Yes. The idea is that an anesthesiologist, instead of sitting in the room, can now monitor 10 anesthesias because it's being given by this robot anesthetist.

You said this robot is not a replacement for anesthesiologists, but...

So the one who would remain, who would be monitoring the five and be able to go into the room if there were a problem, would be the best of the sample. It's making the labor more and more specialized, and it's punishing mediocrity. I think the future is going to be a terrible time to be mediocre.

People like to talk about how robots are going to replace just the working class — but that's not the case, it seems.

AR: Yeah. Look at my father.

AR: Yeah. The job he had for 40 years was creating 9-inch-tall stacks of papers that people can sign at house closings. It's cognitive work, but it's also repetitive. The combination of AI plus robotics, plus blockchain technology will take the job that my father did for 40-some years and mechanize it.

Now, the $12,000-an-hour lawyer at Sullivan Cromwell is fine. Why? Because he's a true knowledge worker; he's at the top of the stack. He's that anesthesiologist who is now monitoring five surgeries. His work is rooted in critical thinking, persuasion, teaching, other things.

My father's [job] was mildly cognitive but is now repetitive. This sort of low-level white-collar labor is going to be displaced.

So what you're saying is that automation stands to make our work ecosystem more of a meritocracy and weed out mediocrity. But so many jobs are awarded by nepotism.

AR: This is a case where I don't agree with the cyberutopians [who] believe there will be more truth in rankings, and that will bring more transparency to performance ... through a digital platform. [They believe] the lawyer of the future isn't going to be at a law firm; he's going to be on a peer-rate review system, lawyers.com or whatever it is.

You talk about robots being the new slave class. What happens to the human working class? Will there be a below-slave class, or will people be trained well enough to occupy jobs that are above robots?

AR: It's a choice we have to make as a society. [It's] going to be a function of the choices that are going to made in public policy over the next five years.

A number of societies have created different mechanisms, from a guaranteed minimum income to other provisions, so that people really don't fall through the safety net. If you're in Scandinavia or in different parts of the world, you can be relatively noncompetitive in the labor market, yet there are all these societal interventions to keep you from becoming indigent.

That really sort of cuts across the grain of American culture, so it's very much an open question. [In the new economy], the idea is that we will generate more bounty, but there will be more economic spread ... I think the only way it works, societally, is for some of the trillions of dollars of wealth creation that does derive from the industries of the future to be used to make a stronger safety net.

Cyberutopians like Marc Andreessen would say the noneconomic bounty we are creating will make us so productive — and the value of the goods and services that will be created by all this innovation will be so great — that people won't have to work that much and have very high standards of living.

I would love to believe that that's going to be true, but I take a little darker view of the world than that.

Obama has talked about wanting to train people for these new-energy jobs: solar, wind, etc. I don't know much real movement there's been.

AR: Barack Obama has a better recognition of the problem than just about anybody else. He really does. If you listen to his State of the Union, he talked about precision medicines. But the responses have been incremental. They haven't been pivoting our workforce. And so I think [Obama] has a strong recognition of the problem, but because of either (and I'm saying either because I don't know the answer to this) a lack of pull within the executive branch, or recognition that the executive branch and the legislative branch are in such different places politically, there hasn't been more than what I would call the pilot-program-sized approach.

So these initiatives should be coming from a local level?

AR: As a practical matter. The federal government isn't doing it, [so] local governments have to. The problem I have with that is that there's industrial policy in other large nation states — including, oh, by the way, China. So when you get this metro-area-by-metro-area approach to economic development, the sum of that tends to make the United States less competitive with countries that have a more centralized industrial policy.

Part of the promise of the internet and technology a decade ago was that you would be able to work from anywhere, and that has not turned out to be the case. Why is that?

AR: I have a thesis on this. It's aging. Clustering [in large cities] has taken place in large part because people in their 20s, 30s and 40s don't want to be remote. As people who have entered the workforce in their 20s in a digital environment grow older, in their 50s and 60s, and don't want to be in the middle of urban everything, then I think we will see that migration of labor. That's an educated guess, but intellectually it actually doesn't make sense. So that's my only theory.