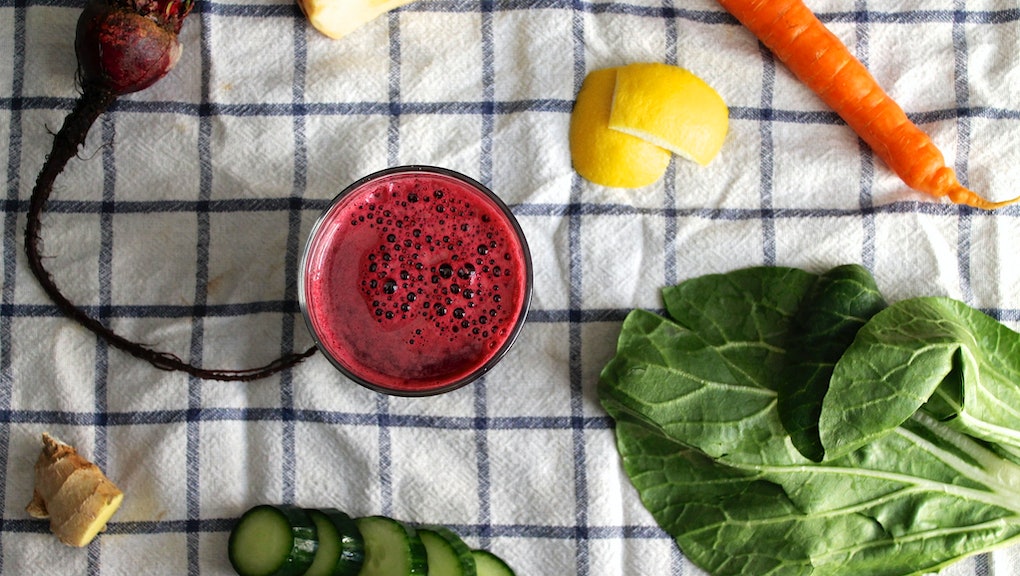 Do Juice Cleanses Make You Lose Weight? Yes — But Here's Why You May Want to Avoid Them

The super trendy juice cleanse has become synonymous with supposed speedy weight loss, detoxification and disease prevention. According to supporters, drinking just about only fresh, unpasteurized fruit or vegetable juices provides people with their full recommended daily servings of vitamins and minerals and cleanses out the system. But the reality is that juice cleanses are unsustainable methods to losing weight — and actually tend to backfire.

"Unfortunately, as most people learn the hard way, juice cleansing can be extremely unrealistic, hard to maintain for a long period of time and leave you feeling even hungrier or craving more foods when you're finished," dietician Lisa Moskovitz, RD, CDN, told Mic. Also, the pounds lost are often just water weight, Liz Applegate, director of sports nutrition at the University of California, Davis told Live Science.

Now there's a wide variety of juice cleanse programs, and some can contain from 1,000 to 1,200 calories a day by combining juice with nuts or milk products, according to the New York Times. But the popular Master Cleanse, which is a celebrity fave juice cleanse program that dates back to the 1990s, is essentially lemon juice, maple syrup, cayenne pepper and a laxative. Rapid weight loss ensues.

But once the person ends the juice cleanse, they are likely to indulge and revert to their past eating habits, resulting in weight gain, Applegate said. "Research suggests that chronic dieters actually are at greater risk for being overweight and having disordered eating patterns," Leslie Schilling, RDN, LDN, told Buzzfeed.

Although they provide minerals and vitamins, juiced fruits lose their fiber, which is what leaves people full and satisfied, Medical Daily reported. Instead, people will be left cranky and hungry.

Juice is also lacking in protein, which can be a problem for those who live active lifestyles, Moskovitz told Mic. "When the body doesn't have enough calories to support energy demands, or protein to help repair and recover working muscles, the metabolism can slow down in an effort to protect yourself," she said. "The lack of protein means your muscles won't have a chance to grow or even sustain."

For those looking for a drastic motivation or jump-start for weight loss, Moskovitz suggested consuming whole, unprocessed foods, this would include replacing refined flours, added sugars and packaged foods with chicken breast, fresh produce and grains like quinoa.