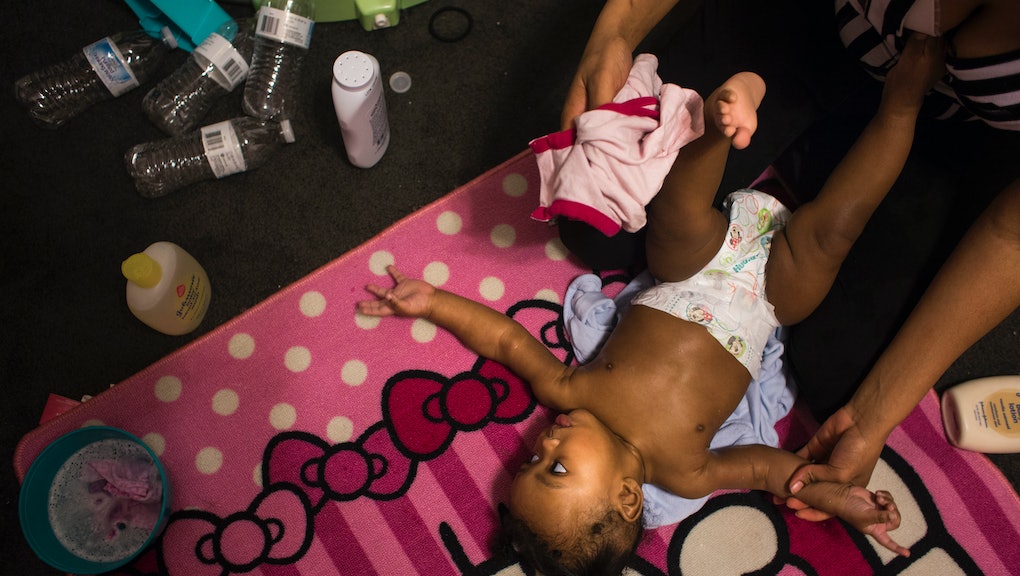 On Feb. 2, a dead body was found across the road from the Holiday Inn Express in Flint, Michigan. This was not extraordinary on its own — the city regularly boasts some of the highest rates of violent crime in the country.

What was remarkable was the timing. That same night, at the University of Michigan-Flint, a town hall meeting was underway to address the local water crisis, which had exposed thousands of children to lead poisoning over the past year and a half and launched Flint into the national spotlight.

Jacqueline Patterson was at that meeting, and slept at the Holiday Inn Express that night. She believes the two incidents are more closely related than people think.

For Patterson, the dead body was a potent symbol — both of the dire situation the city finds itself in today and how that situation stems from historical racism, the eradication of healthy opportunities and the environmental perils that make revitalization there so difficult.

"What's happening in Flint right now is so stark and so systemic," Patterson told Mic over the phone. "Our next job is to help folks understand it's not a unique situation."

Patterson has been director of the NAACP's Environmental and Climate Justice Initiative since 2009. When the water crisis started making headlines, she flew to Michigan from her office in Baltimore to help Flint residents navigate the terrain ahead, helping them find uncontaminated fruits and vegetables for their children to eat, organizing their needs into demands for policymakers and giving them access to NAACP resources.

But it struck her that a pattern she'd seen play out across the U.S. was also being echoed in Flint — one with broad implications for the city's black and brown residents, and the quagmire of depleted opportunity in which they found themselves.

In other words, the environmental disaster in eastern Michigan is part of a much larger historical condition.

Throughout the early 20th century, racist housing policies created segregated black neighborhoods across America. They cut these neighborhoods off from the resources being pumped into their wealthier counterparts — areas created by "white flight," or white people moving to the suburbs to get away from integrating neighborhoods.

The result was a near-complete draining of capital and investment, accompanied by serious vulnerability to environmental hazards. Instead of serving all Americans equally, legal measures like the zoning ordinances designed to protect residences from public health dangers were applied along racial and class lines, strengthening the disparities that existed between the haves and have-nots.

A pattern emerged as a result: Poor black and brown communities were disproportionately exposed to pollutants, such as air pollution and runoff from waste dumps.

In places like River Rouge, Michigan, homes in black neighborhoods were built close to smoke-spouting factories, emitting such high levels of fine particle pollutants that older members of the mostly black city recall "black rain" falling to the ground around their childhood homes.

Elsewhere, medical waste was discarded close to black neighborhoods, like in Mulberry, Florida, where a majority-black community was chosen as the site of the state's first hazardous-waste injection well — a mix of toxic fluids that are pumped into porous rocks underground — raising the risk of poisoning the local water supply.

In Chester, Pennsylvania, which is nearly 75% black, an investment company called Russell, Rea, Zappala & Gomulka built several toxic waste facilities since the mid-1980s, including the fourth largest trash incinerator in the country. Charles Lee, former chairperson of the National Environmental Justice Advisory Committee, once remarked that it was the "worst case of environmental racism he [had] ever seen."

Meanwhile, highways and thoroughfares leveled poor black and brown communities with devastating regularity, especially in places where people lacked the political clout to effectively combat them. The South Bronx in New York City in particular saw the Cross Bronx Expressway transform the already impoverished borough into a place with the highest age-adjusted asthma death rates in the entire state.

These disparities aren't confined to the recent past, either. In "Cancer Alley" — the majority-black, 85-mile stretch between New Orleans and Baton Rouge, Louisiana, that's home to more than 150 chemical processing plants and refineries — poison is literally seeping into people's blood and lungs on a daily basis.

One resident of Standard Heights, a black neighborhood in Baton Rouge, recently explained to MSNBC how most of her neighbors have had to leave over the years, no longer being able to ignore the burning eyes, the mysterious sores and the persistent respiratory illnesses. "They're all gone now. Nobody here but me," she said.    "[Sometimes] the smell is so bad, so bad you just can't stand it."

A study from the University of Minnesota recently revealed that nonwhite Americans are exposed to concentrated nitrogen dioxide, which can cause serious respiratory problems and is one of six toxic air pollutants regulated by the Environmental Protection Agency, at 38% higher rates than their white counterparts. And in some places, it's even worse.

"It's awful," said Patterson. "Now it's all the political, social and economic determinants that lead to this stuff — that's what we need to address now."

In the case of Flint today, where about 56% of the population is black and about 41% lives below the poverty line, corrosive water from the Flint River has eaten away at much of the city's antiquated pipe system, causing lead to be released into the drinking water supply and poisoning the city's residents.

It's become increasingly clear that government officials were aware of these water problems since at least early 2015, but encouraged people to keep drinking it anyway. Now, as outraged Americans turn their eyes to the city, environmental advocates are strategizing about ways to ensure this crisis translates into long-term political action.

"We have to harness this outrage as much as we can," said Tracey Ross, associate director of the Poverty to Prosperity Program at the Center for American Progress. "We have to use Flint as a pivot point to learn why we have communities sketched out the way they are in the first place."

As one can imagine, this isn't easy. Part of growing up poor and black in America means internalizing these environmental disparities as normal — especially when they are functionally invisible most of the time, like asthma, lead poisoning or other illnesses. It's unusual for these conditions to get noticed at all — Ross suggested that Flint is getting such widespread attention now explicitly because it's seen as a breakdown of the natural order, a disruption in how the system is supposed to work.

"We're OK with environmental racism because we've bought into how our system functions ... even though that system is wrong," Ross said.

But these are nationwide problems. And what's worse, it can take years to recognize the damage they cause. This includes but is not limited to the defects that accompany lead poisoning or the respiratory issues that grow out of lifelong exposure to toxic air pollutants.

The symptoms associated with lead exposure, for example — slowed growth, developmental delays, learning disabilities and a plethora of physical ailments — have long-term implications for people's mental and physical development that can impact their performance in school, work and interpersonal relationships in ways that poor minority neighborhoods are ill-equipped to handle.

It can even lead to violence — a notion that's hard to shake for someone like Patterson, staying at a hotel in Flint across the way from a person who's recently been murdered.

"You can't undo the damage this causes," Ross added. "Once you're exposed to lead, that's it." Meanwhile, she explained, the programs and institutions that help kids work through challenges like this are exactly the kinds of social services politicians tend to neglect. The result is a vacuum in responsibility — the burden of which inevitably falls on the victim.

"[Somewhere] down the line, I can see a scenario where these same politicians are telling a 17-year-old high school dropout to pull himself up by his bootstraps, while not acknowledging that he was poisoned when he was seven," Ross said. "We need to talk about what these poisoned kids need today, and then what they need down the road. And we need to get beyond the need for new water pipes and filters, which is rightly dominating the conversation right now, and making sure schools are prepared for what's coming, that we're anticipating needs five or ten years from now.

We need to talk about what these poisoned kids need today, and then what they need down the road.

Meanwhile, Patterson has been traveling between Baltimore and Flint for weeks now, providing support and resources to people on the ground who've been fighting this fight much longer than the media has been paying attention to it.

For the past six years, she's spent much of her time speaking nationally, devising toolkits, outlining policy recommendations and supporting people working to build environmentally sustainable black communities in her capacity as head of the Climate Justice Initiative — work that has very infrequently found itself at the top of anyone's agenda. Sometimes she can feel like she's screaming into a void.

The truth is, we rarely talk about environmental injustice when we talk about America's impoverished black and brown communities. We attribute their disaprities to everything from intergenerational poverty and housing discrimination to gun violence, failing schools and mass incarceration, swiftly linking them back to our nation's original sin — slavery — and tracing their domino effect to the present day.

It should not surprise us that current racist policies impact how the environment is treated as well. This is especially true of the impact government policy has: The physical and mental ailments that stem from lead poisoning and pollution can be catastrophic when paired with already-endemic poverty, violence and deferred opportunity. It's a link that bears serious soul-searching today.

Will America care about environmental racism when it's no longer flooding their news feeds every day?

Right now, Flint is an exception. The spotlight is here. Stories are being published every day outlining how Michigan's government has failed its people. Presidential candidates are shouting out the city during their debates, while celebrities are donating thousands of dollars worth of bottled water to thirsty residents. Very rarely has environmental injustice faced this much sustained scrutiny in the U.S., and there's a strong sense among advocates that this is a moment to harness for change.

But as Patterson reflects on the symptoms of such violence — from the poisoned children across the country to the dead body across the road from the Holiday Inn Express in Flint — the question remains: Will America care about environmental racism when it's no longer flooding their news feeds every day?

We will have to wait and see. In the meantime, the country's most vulnerable populations continue to pay the price for our neglect.