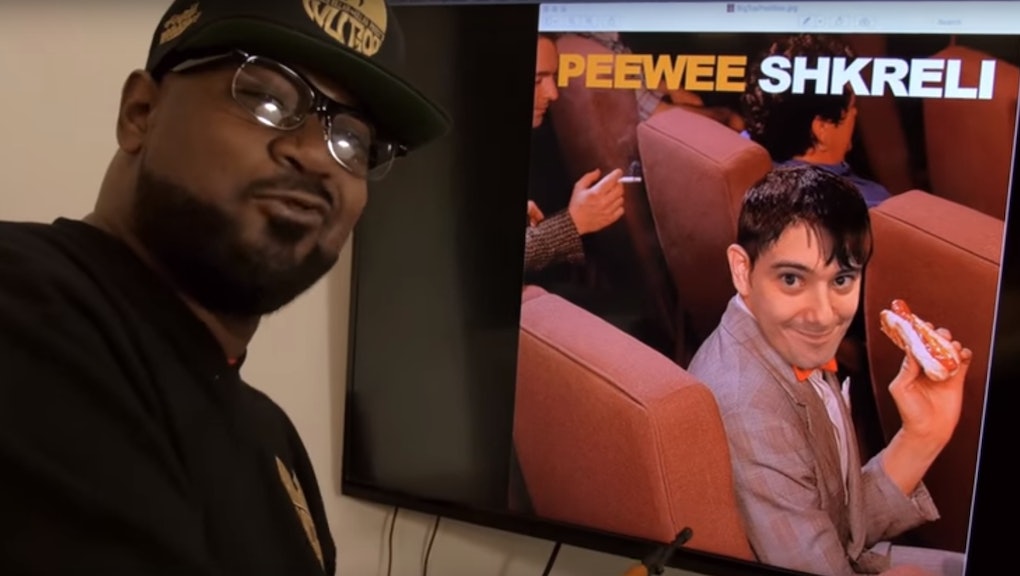 Martin Shkreli, the so-called "pharma bro" who earned the ire of the entire country last year after raising the price of the HIV treatment drug Daraprim by 5,500%, just got absolutely slayed in his public feud with the Wu-Tang Clan.

Wu-Tang's Ghostface Killah, who has been warring with Shkreli since Shkreli bought the only copy of the Wu-Tang Clan's album Once Upon a Time in Shaolin in November, released an around 12-minute video which should serve as the final period in Shkreli's months-long public humiliation.

Read More: These 5 Charts Show Who Your Favorite Rapper's Rapper Is

In the video, Ghostface lays into Shkreli, mocking everything from his appearance ("Peewee Shkreli" and "the man with the 12-year-old body") to the prescription drug scandal ("Something's wrong with you"). He also denigrates Shkreli for a cringe-inducing video featuring Skhreli with a small group of ski-mask-wearing men dubbed his "Rice Krispy Gang."

"You a fake-ass supervillain, man ... check out how I think of you and your boys," the rapper says in the video before cutting to video of henchmen from the campy 1960s-era Batman show.

Ghostface mocks Shkreli for embarrassing himself on such a large public stage, and mocks his privilege. "You never been in the crib with welfare cheese and fried balony and all that stuff like that for dinner at nighttime, man. Don't come at me with that little punk-ass shit."

At that point, Ghostface hits on the issue that put Shkreli on the hot seat in the first place: Daraprim.

"People can't pay that much, man," says the rapper. "You gonna raise it to $750 per pill? It's like, yo how they gonna live, man? You a real killer, man ... but you a soft killer, man! You a baby, man! ... Something's wrong with you ... You don't do that to the people, man. They need that. Right now you got them weak right now because they don't even know where they're gonna run to go get their medicine from now, because of you. Youse a clown."

Finally, the rapper twists the knife, bringing out his mother and sister — his "goons" — to have the last word.

"If you was my son, I'd whip your ass," his sister says. "I'd give you an ass whupping, because what you're doing is so, so foul." Later, she discusses her own history with cancer and tearfully requests Shkreli's actual mother "give him a hug. Tell him to stop fucking over people and being greedy."

As Gawker's Jordan Sargent pointed out, the video isn't entirely awesome — the rap star chose to use the opportunity to promote a dubious cancer-fighting product, a cannabis oil concentrate called "Wu Goo." (While many scientists currently believe cannabinoids may have utility in cancer treatment, it's probably not available at your local pharmacy.)

Still, Ghostface's Shkreli putdowns manage to nail exactly just why the former pharmaceutical executive struck such a nerve with the public. Not only does Shkreli seem to embody everything wrong with a much-derided industry, the guy just doesn't know when to stop digging his own grave, tweeting a response that's all but guaranteed to keep the beef going.

Maybe it's the looming criminal trial, a $65 million lawsuit from his former business partners, unflattering exposés of his personal life and now a very public dressing down from one of his (formerly) favorite rappers, but Shkreli really doesn't have much left to cling to beyond his own notoriety.