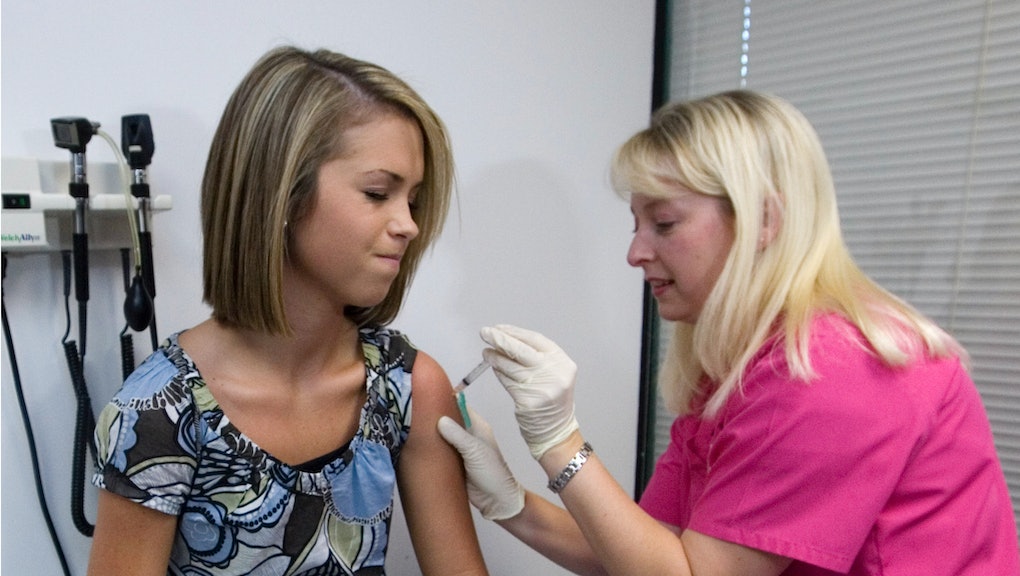 HPV vs. Herpes vs. Genital Warts — What's What in the World of Uncomfortable Bumps

To be clear: HPV, herpes and genital warts are three very different members of the sexually transmitted infection family. One is, in fact, a symptom of another. However, they are all associated with the eruption of uncomfortable bumps in both very visible and very discreet places, which may explain why they occasionally get lumped together on the internet.

In a nutshell, the difference is this: The human papillomavirus can cause genital warts, while the painful blisters typically associated with genital herpes come from a different virus entirely: herpes simplex virus.

HPV is the most common STI, according to the Centers for Disease Control and Prevention, "so common that nearly all sexually active men and women get it at some point in their lives." Comforting. It comes in many forms, some of which clear up on their own without any repercussions for a person's health, and some of which can result in genital warts or cancer.

What do genital warts look like? Flesh-colored bumps that, according to the CDC, "can be small or large, raised or flat, or shaped like a cauliflower" and can crop up on their own or in clusters. They may appear on the penis, scrotum, groin, thighs and/or the anus for men; inside and outside the vagina and/or anus and on the cervix for women. Because they spread through genital contact, they can also show up in and around the mouth: on the lips, tongue, throat, etc.

Readers who have noticed irregular bumps on their genitalia or around their mouths should seek medical attention.

What types of cancer does HPV cause? If left unchecked, HPV can cause cancer in those parts of the body named above according to the CDC, such as the cervix, vulva, vagina, anus, penis, throat, tongue and tonsils. Cancer-causing HPV strains aren't the ones that result in genital warts, the CDC said.

How do you know if you have it? There isn't a test for HPV, which is what makes it such a tricky STI. Women often find out they have it when getting screened for cervical cancer — a Pap smear comes back with irregular results. Thus, it's important to stay on top of annual exams — and to use condoms when having sex. Vaccines like Gardasil — recommended for boys and girls age 11 to 12, or before they become sexually active — can also reduce a person's odds of getting HPV.

There are two strains of the herpes simplex virus: herpes simplex-1, commonly associated with cold sores, and herpes simplex-2, often the culprit behind genital herpes. The bad news? HSV-1 is not exclusive to above-the-belt regions. HSV-1 can result in sores on, in and around the mouth, as well as on the chin, nose and fingers, according to Herpes.com.

Any of those body parts can transfer the virus to another person's genitals: Herpes spreads via skin-to-skin contact, regardless of whether or not a person has visible sores. Which is why so many people have it.

What do genital herpes look like? Blisters, on and around the genitals and/or anus. The blisters will eventually pop and scabs will form over the affected area. According to Herpes.com, the first outbreak is often the worst outbreak, accompanied by acute pain and flu-like symptoms.

Here's the caveat: Herpes is often symptomless. According to the CDC, an estimated 87% of infected individuals don't know they have the virus — they've never shown symptoms or have dismissed them as another, non-worrisome skin condition, like a pimple or an ingrown hair. That's one reason why herpes is so easy to pass on.

How and when can herpes spread? The prodromal phase is stage one of a herpes outbreak, in which the genitals (or mouth/cheeks/chin/nose/fingers, as the case may be) begin to tingle, burn, itch or hurt. The flu-like symptoms — aching muscles, fever, swollen glands, headache — would occur at this time too. According to Herpes.com, the prodromal phase is a highly contagious one. From that point until the sores heal, herpes is at its most contagious.

But herpes can be transmitted even when symptoms aren't present, thanks to a phenomenon called shedding. The virus goes through periods of activity and dormancy; when shedding occurs, HSV has woken up and traveled from the nerve cells to the skin without necessarily showing signs that it's active. In those instances, it can spread without a person knowing they're contagious.

How do you know you have herpes? When a patient has sores, a physician can do a viral culture or an HSV DNA test. Without symptoms, the preferred screening method is blood testing. However, for people who fall into that camp, the CDC doesn't recommend testing for HSV. There are a battery of reasons for this, including the risk of false positives, the mental trauma accompanying a diagnosis and the fact that there's no cure for herpes. People who want to be tested during a routine STI screening should specifically ask their healthcare providers for the test if they want it run.

You don't know what your partner has until you see their bill of health. Use condoms and use them correctly. Talk to your partner about your sexual histories. The only way to avoid STIs is to abstain from sex entirely; the best we can do is be as safe as possible and get screened often.