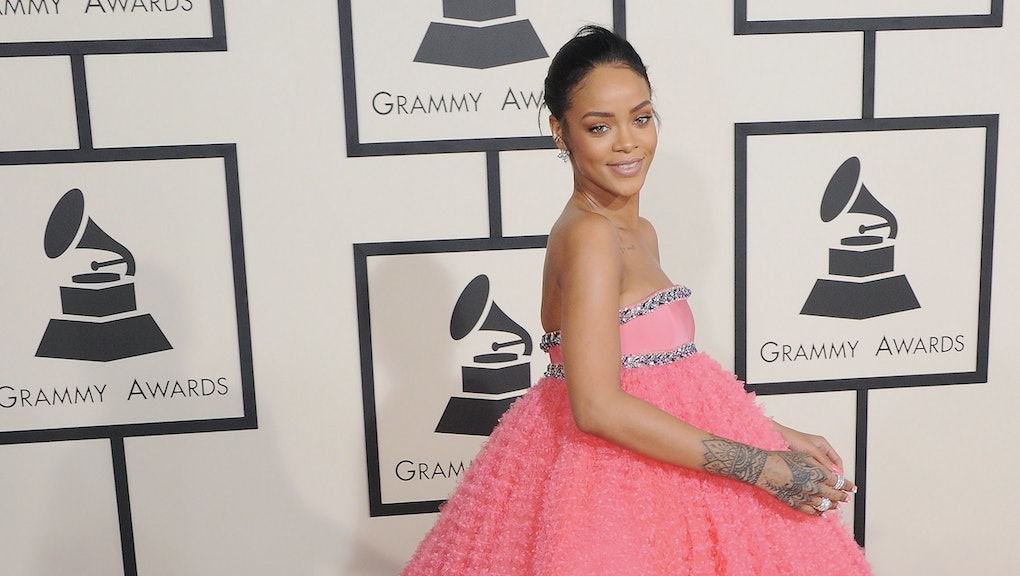 How Many Grammy Awards Has Rihanna Won?

Though Rihanna isn't nominated for any Grammy Awards this year, with many in her online "Navy" fandom saying "FourFive Seconds" featuring Kanye West and Paul McCartney was snubbed, she will be performing during the coveted night of music. Besides, it's not like Rihanna is too worried about winning any accolades — she's already won eight Grammys.

With almost every year in Rihanna's career since bursting onto the scene in 2005, she has released new music, either in the form of singles, features on other artists' hits or albums (Anti marks her eighth studio album).

Here's a list of all the Grammys Rihanna has won below:

2011: Best rap/sung collaboration for "All of the Lights" with Kanye West, featuring Kid Cudi

2009: Best rap/sung collaboration for "Run This Town" with Jay Z

With an upcoming world tour and newly released album (her most rebellious one yet), it seems unlikely Rihanna is pressed about raking in any new Grammys. Meanwhile, most of the talk surrounding this year's big night for music is about which designer Rihanna might wear and which song off Anti she may sing. Though the list of performers this year is quite expansive, RiRi remains at the top of headlines, arguably being the most-talked about celebrity attending the event.

Fans across social media are excitedly awaiting the notorious good girl gone bad's Grammy performance, where she's expected to perform a song off Anti for the first time: