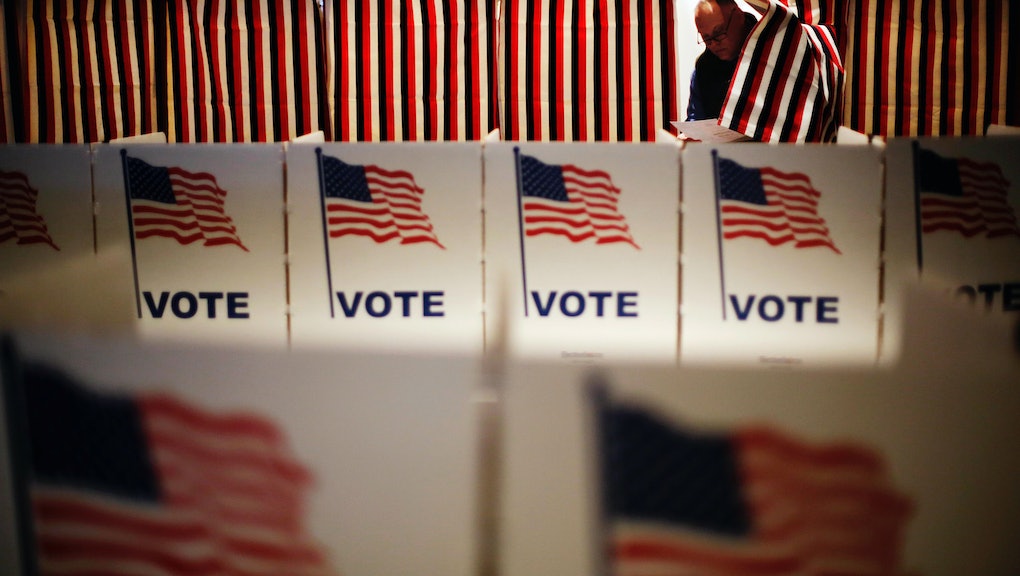 New Hampshire voters jammed the polls Tuesday for their first-in-the-nation Democratic and Republican primaries, with Bernie Sanders and Donald Trump coming into the contests as the respective heavy favorites for their party nominations.

Trump held a commanding double-digit lead on primary day in the Granite State, averaging better than 31% support. Marco Rubio, John Kasich, Ted Cruz and Jeb Bush were bunched up behind him in a brawl for second and third places — and a "ticket" out of New Hampshire to the next big primary in South Carolina.

On the Democratic side, Hillary Clinton and her supporters braced for a rout by surging Bernie Sanders, who has captured the attention of millennial voters with his sweeping talk of battling economic inequality.

Reports of record turnout abounded ahead of the close of the final New Hampshire polling sites at 8 p.m. Eastern.

This post will be continually updated with live coverage of the primaries as the results start to come in.

Per the Associated Press and New Hampshire Public Radio, Sanders had 60% support to Clinton's 39%.

On the GOP side, Trump dominated with 34% of the vote. Kasich followed at 16%, and Cruz, Bush and Rubio remained bunched up at about 11% support each.

With results still being tallied, Christie appeared to be set to come in sixth, behind one sitting governor, Kasich, and a former governor, Bush.

"We're going to go home to New Jersey tomorrow and we are going to take a deep breath," he said, as quoted by Time. "See what the final votes are tonight, so that matters ... That is going to allow us to make a decision about how we move from here in this race."

The Florida senator, who had been aiming for a second-place primary finish, blamed himself for an unimpressive performance during the last pre-primary GOP debate. Rubio was widely mocked — particularly by Christie — for robotically repeating himself during Saturday's televised showdown.

"I did not do well on Saturday night. That will never happen again," he vowed.

Also up in the air: The fates of candidates such as Carly Fiorina, whose campaign has flagged after enjoying a bounce from a strong debate performance earlier in the cycle, and Ben Carson, who similarly enjoyed a brief period of popularity before New Hampshire and has said he would be open to consideration for vice president on a Trump ticket.

10:10 p.m.: Kasich addresses his supporters after a second-place finish.

In a personal, at times emotional address, Kasich congratulated his supporters and said the campaign would roll on with renewed energy.

"There's magic in the air with this campaign because we don't see it as just another campaign. We see this as an opportunity for all of us — and I mean all of us —  to be involved in something that's bigger than our own lives, to change America ... to restore the spirit of America and to leave no one behind. Am I right? That's what we're all fighting for."

He humbly told the crowd, "The wonderful people of New Hampshire have changed me."

Kasich stepped it up with a laugh, though.

"You know, Bernie talked so long, I thought he was going to hit his 77th birthday before he got off the stage. and, Hillary, you just needed this much and head to South Carolina, because it's not working here. It's not working here, okay?"

"We are going to make America great again," Trump opened at his election night party, thanking the family members who helped him campaign — and those who could not be there to do so.

"I want to thank everybody, but I really have to begin by paying homage to my parents, Mary and Fred. They're up there. They're looking down. They're saying, 'This is something very special,'" he said.

"They love this country and they're very, very happy right now.''

The niceties didn't last long, though.

"I don't know where it's going with Bernie. We wish him a lot of luck but we are going to make America great and we are going to do it the old-fashioned way," he continued, rolling into a variation on his standard stump speech that included promises to protect veterans and the Second Amendment.

"I am going to be the greatest jobs president that God ever created. Remember that."

He did not mention Hillary Clinton once.

"Thank you, thank you, New Hampshire,"  the Vermont senator shouted over the din of cheering, sign-fluttering supporters.

"Nine months ago we began our campaign here in New Hampshire. We had no campaign organization. We had no money. We were taking on the most powerful political organization in the United States of America," he said, alluding to his campaign's face off with the Clinton juggernaut and its early sense of inevitability.

Sanders kept to the bedrock tenets of his anti-establishment campaign in the victory speech, but found room for levity — specifically, a Trump impression.

"Tonight, with what appears to be a record-breaking voter turnout — because of a huge voter turnout, and I say yuge — we won because we harnessed the energy and the excitement that the Democratic Party will need to succeed in November."

A somber but unbowed Clinton appeared with her husband and daughter at Southern New Hampshire University to formally acknowledge the defeat her campaign and backers had seen coming.

"I don't know what we would have done tonight if we actually won," Clinton said. "I'm very grateful to all of you."

Clinton congratulated Sanders on his victory, but quickly pivoted back to courting voters with an eye to South Carolina, Nevada and beyond.

"People have every right to be angry — but they're also hungry. They're hungry for solutions," she said, flicking at her bedrock campaign argument that she's the candidate with the experience and pragmatism to lead the country to real change.

"I will work harder than anyone to actually make the changes that make your lives better."

The Ohio governor appears to have won bragging rights coming out of New Hampshire.

About an hour after the close of the polls, MSNBC projects Kasich would capture second place behind Trump with 15% of the vote.

Although only 24% of the vote has been counted, Kasich — a fan of reminding voters that no Republican has ever captured the White House without carrying Ohio — should feel a jolt of excitement among his supporters.

"What a night! Thx to our incredible NH supporters!" Kasich tweeted. "Time to trade our snow boots for flip flops. See you tmrw SC!"

With 25% of precincts reporting, per the New York Times, Trump maintains a commanding 34.6% share of the vote.

While campaigns usually don't scramble to admit it on Primary Day, benchmark events like the New Hampshire vote can call for fight or flight decisions from struggling candidates.

Tuesday night's results could mean it's time for some hard choices on the part of some candidates — notably New Jersey Gov. Chris Christie, who banked his entire run on a strong New Hampshire showing but seemed stuck in fifth place in early results.

On the Democratic side, former Maryland Gov. Martin O'Malley has already called it quits.

The once-packed GOP field has also narrowed considerably, with hopefuls from Scott Walker and Rick Perry to Lindsey Graham, Bobby Jindal and Rick Santorum having suspended their bids.

Trump has already carried the day in New Hampshire, but now the race is on for the GOP's silver and bronze medals — also known as the "tickets out" of the Granite State and on to South Carolina.

About a quarter of an hour after the close of the final polls, early results showed John Kasich slightly ahead of Jeb Bush for second place, although that CNN count included just 9% of the total vote.

Kasich and Bush are known as relatively moderate candidates compared to firebrand hopefuls such as Trump and Cruz.

Not on the leaderboard: Marco Rubio, whose "3-2-1 strategy" called for a third-place finish in Iowa, which he achieved, followed by a second-place win in New Hampshire and a victory in the Feb. 20 South Carolina GOP primary.

8:07 p.m.: Hillary Clinton is reportedly ready to concede the primary.

New Hampshire's vote wasn't the nailbiter the Iowa caucuses turned out to be.

CNN reported that Clinton, whose campaign and supporters came into the primary seemingly prepared for a trouncing, planned to publicly concede the contest to Sanders without delay.

Clinton, along with other candidates, is already looking toward the next big round of primaries in South Carolina.

8:01 p.m.: The Associated Press has called the New Hampshire primaries for Bernie Sanders and Donald Trump.

8 p.m.: The polls have officially closed across New Hampshire.

7:38 p.m.: What Republicans care about: The economy, terrorism and trust.

The exit polls found three-quarters of GOP voters overwhelmingly distressed about the trajectory of the national economy. Six in 10 also said they were "very" worried about a major terrorist strike, compared to just a quarter of Democrats who felt the same.

The upshot: Republican voters are not happy with Washington — or their own party.

Fully 90% of voters in exit polls described some level of dismay, with four in 10 calling themselves "angry." Half said they felt "betrayed" by the GOP.

More Republicans than Democrats — four in 10, compared to roughly half as many Democrats — said they decided on a candidate in the last few days, and two-thirds said the televised debates had factored into their choice.

7:30 p.m.: What Democrats care about: honesty, income inequality and the economy.

According to exit polls of New Hampshire voters, Democrats in the Granite State listed being "honest and trustworthy" as their most important qualities when deciding on a candidate. Those voters went overwhelmingly for Sanders.

On the issues, a plurality of Democrats listed income inequality as their No. 1 issue, followed by the economy and jobs and health care. Sanders outpaced Clinton on all those issues:

New Hampshire voters are turning out in record force for the primaries, according to live news reports.

CNN showed lines of cars reportedly reaching for "miles" at poll sites, with police on scene to control traffic snarls and calls to be made as to which of those thronging the voting stations would be allowed to cast ballots and which were too late.