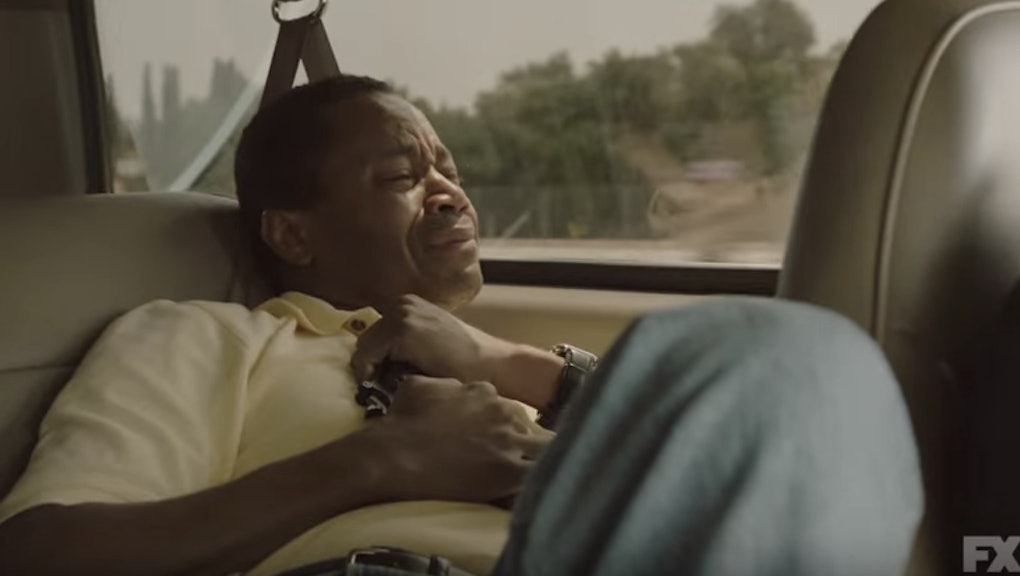 At the end of The People v. O.J. Simpson: American Crime Story, episode one, we left Cuba-Gooding-Jr.-as-O.J.-Simpson zooming down a California highway in a white Ford Bronco, an attempt to put some distance between himself and a sticky situation developing at his Brentwood, California home.

Simpson had just been fingered as the primary suspect in the double murder of his ex-wife, Nicole Brown Simpson, and her friend/possible lover, Ron Goldman. Prosecutor Marcia Clark (played by Sarah Paulson with the help of an extraordinary hairpiece) pegged him as guilty straight out of the gate, cuing both Simpson's emotional breakdown and the assembly of what is now known as the defense attorney dream team. Episode one saw Robert Shapiro (played by John Travolta) and Robert Kardashian (David Schwimmer) drafted to Simpson's cause; it saw Simpson threaten suicide in Kim Kardashian's bedroom and his eventual escape from what should have been police custody.

Episode two, "The Run of His Life" begins with a shot of Kardashian, perched on the edge of his bathtub and praying for O.J.'s safety. This contrasted with the enormous ego that is Shapiro, blustering around in search of his colleague. Kardashian isn't M.I.A. for long: he reports to Shapiro's office, bringing with him an apparent suicide note Simpson left after making his great escape.

"Jesus Christ," Shapiro says when Kardashian hands him the letter, "Who signs a suicide note with a smiley face?" Shapiro, the picture of empathy.

Meanwhile, in the prosecutor's office, the team is at a low point. "If it were our absolute goal, could we look more incompetent," the district attorney Gil Garcetti (Bruce Greenwood) says. "It's the worst day of my life. Worse than when I was diagnosed with cancer." Which seems like an overstatement, but then, it was an emotional rollercoaster of a time for everyone.

The prosecution confronts the situation head-on in a press conference, informing America that the NFL hero is now a fugitive from the law. And we do mean America: everyone and their mother tuned into coverage of the case, including O.J.'s defense.

"Everyone's blaming me for everything," Shapiro says, "What we need is our own press conference." And so he holds one. Immediately. And it is tremendously self-serving, as underlined by Cochran, who calls Shapiro a prick and proceeds to point out the flaws in Shapiro's presentation. (Setting the stage for his jump onto the defense bandwagon, perhaps?)

Then Robert Kardashian takes the stage, reading the suicide note Simpson left behind. "At times I felt like a battered husband," O.J. wrote, a claim that prompts an outpouring of skepticism from Clark and her team. Kardashian reads O.J.'s plea for the nation to remember him as he was, wrapping his address with a quick refresher on how one spells his name: The press has no idea who he is.

Which doesn't sit well with the army of Kardashian kids watching their dad's moment in the spotlight from their living room. "K.A.R.D.A.S.H.I.A.N., KAR-DASH-I-AN, KAR-DASH-I-AN," they chant at their TV, setting a disquieting precedent for future decades. Did the trial of the century create four ego monsters?

Meanwhile, O.J.'s streaking down the freeway toward freedom. Or, such is his intention. A fellow motorist pulls off the road and calls the cops on a conveniently located payphone; law enforcement promptly shows up on the scene, surrounding the Bronco as it's stopped in traffic. The driver, Al Cowlings, refuses to exit the car, reminding the officers that O.J. — who, at this point, is still a widely loved celebrity — is in the back seat with a gun to his head. None of them is willing to fire and so the Bronco peels off.

Back on the Simpson ranch, Kardashian is left to confront O.J.'s family with what still looks a lot like a suicide note. He informs the family of his theory just before the room sets eyes on the television, where the low-speed chase is well underway. Apparently, the defense missed out on the news whilst occupied with all that self-promotion.

"Good for you, O.J., good for you," Shapiro murmurs when he finds out what's going on. "You're still in the game."

That he is. Trailed by a battery of police cruisers, O.J. is insisting that Cowlings deliver him to his family. From the back of the Bronco, the fugitive makes an emotional call to Kardashian — beast of burden to the stars — asking the lawyer to say his goodbyes to the entire crew and announcing his intention to return to his home to see his mother, one final time.

His home, of course, is abuzz with police activity. And the entire nation is looking on, biting its fingernails.

As Kardashian scrambles to keep everything and everyone together, Cochran is keeping a close eye on the story as it develops. The audience can almost see the resolve crystalizing in his mind — there's no way he's not getting in on this case. For him, it looks like an issue of typical racial profiling by the city's police department.

In an interview with CNN, he brings the charge against Simpson back to the issue of racism on the part of law enforcement. When the anchor reminds him that O.J. might be a murderer, Cochran reminds him that the LAPD's track record isn't exactly encouraging.

"If the LAPD is involved we should let history be our guide," Cochran says, explaining that the police shoot first and ask questions later.

The people of L.A. would tend to agree. In an over-the-fence conversation with his neighbors, Christopher Darden questions O.J.'s god-like status amongst football fans, challenging that the celebrity has lost touch with the black community.

Crowds watching the chase echo that sentiment, telling reporters that the police will pick a black man up for anything as the Bronco sails by.

And the situation inside it is anything but under control. On the phone with officers, O.J. had previously reiterated his intention to kill himself. "This gun is for me," he said, prompting panic from the police who urge him to keep himself alive. The driver urges the same, but O.J. is entirely bereft. The Bronco heads for his home, where a sea of journalists and police officers await.

So when they arrive, no one gets out of the car. A S.W.A.T. team negotiator attempts to talk O.J. down, and because the car is being watched on all sides, they kill the lights on the property. Which doesn't sit well with a suspicious Cochran, who deems it a sign that the police don't want the world to see what's about to happen.

But what's going on IRL is this: Kardashian attempts to lure O.J. out of the car and into the house on the grounds that the arrest will happen inside, away from the cameras, so long as the gun remains in the car.

"No hotheads, we're on TV," one officer says after O.J. agrees to the terms. "No firing unless you're fired upon first."

And O.J. leaves his weapon in the Bronco. He exits the car clutching framed pictures of his family to his chest, which officers very nearly mistake for a gun. Kardashian intervenes and O.J. makes a safe passage into the house, saying sorry most every step of the way. He submits to arrest after a brief call to his mother.

"We're taking him to trial," breathes a smug and smoky Clark. But within greater L.A., the rumor that O.J. was framed is already percolating.