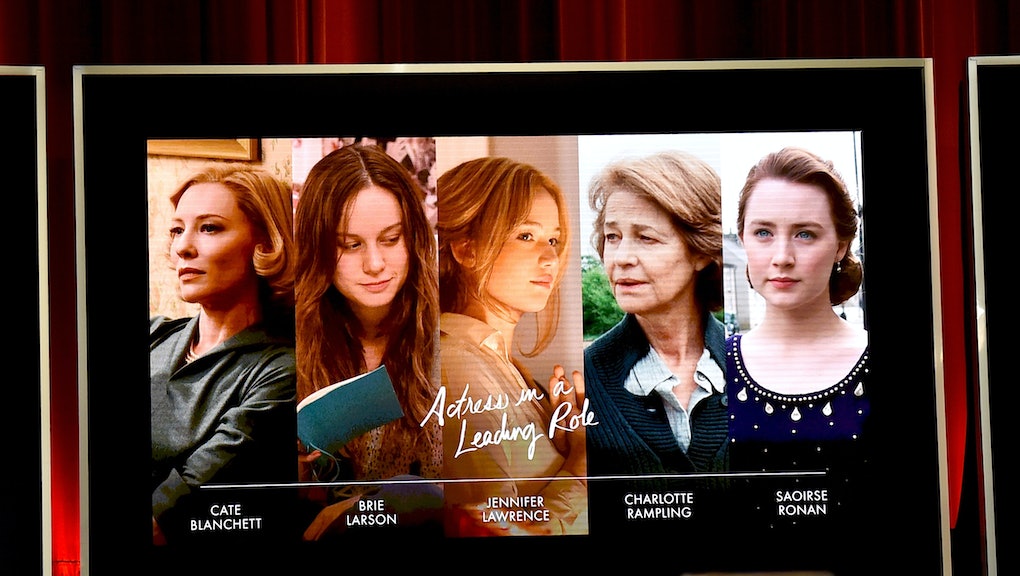 Great News for Women on Screen — But There's a Catch

Women have been speaking out about the discrimination in Hollywood for a long time. It seems the industry finally listened in 2015: The top-grossing films of the year featured a significant increase in female protagonists, Variety reported. This apparent achievement fell short of true progress, however, as the majority of these leading roles went to white women.

While women were cast as 22% of lead characters and 33% of all speaking parts in the 100 top grossing films of 2015, only 27% of the female roles played by black, Latina or Asian actresses were considered major roles, research conducted by the Center for the Study of Women in Television and Film at San Diego State University found. The study also reported a paltry representation of female characters of color overall: 13% of female characters were black, and only 4% Latina and 3% Asian.

Other studies confirm that female actresses are hardly the only non-diverse group in the entertainment industry. According to the 2015 Hollywood Diversity Report, 96% of TV network and studio heads and 93% of senior management in the TV industry are white. As the recent #OscarsSoWhite controversy also revealed, few people of color are recognized or awarded for their work either.

Additionally, while women may be increasingly, prominently portrayed on-screen, they still remain marginalized behind the scenes. Women currently only represent 27% of creators, writers, producers, executive producers, photography directors and editors of prime-time TV shows, according to a 2015 Women's Media Center report. They also experience a significant wage gap: The 10 highest-paid actresses made about $218 million in 2015 while the 10 highest-paid actors made $431 million, Variety reported in November.

This study may reveal relative progress, but is hardly a sign of imminently impending parity. As Academy of Motion Picture Arts and Sciences president Cheryl Boone Isaacs recently said of the lack of diversity in Hollywood, "This is a difficult but important conversation, and it's time for big changes. But change is not coming as fast as we would like. We need to do more, and better and more quickly."