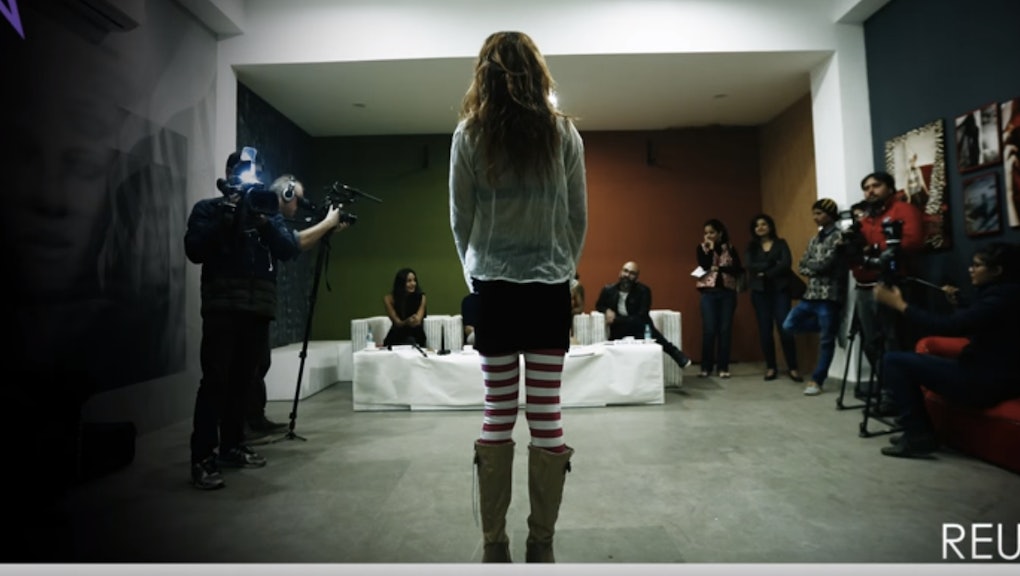 Rudrani Chettri, a transgender Indian woman who is the founder of the LGBT charity Mitr Trust, wants to set up the country's very first transgender modeling agency in New Delhi. Currently, she's seeking funding for the cause. But before the agency can be established she, of course, needs to find some models.

Here's how she's making it happen:

On Feb. 7, Chettri conducted a walk-in modeling audition for transgender women, reportedly the first time one has ever been held in the country. At the audition, women posed in front of a camera while videographers on the side captured the rare event.

The point is not just to help launch models' fashion careers; it's to fight the intense stigmas that these women still face within their communities.

In India, transgender women are often called hijras, considered its own identity group in South Asia. Although the Indian government legally recognized hijras, which includes transgender individuals, as a third gender in 2014, they still face threats of assault, rape and murder on a daily basis.

That's why Chettri founded her charity, Mitr Trust, in 2003. Since then, it has fought hard to help hijras integrate into society through education, including offering medical assistance to those in need. So far, her charity has assisted more than 1,500 people in Delhi alone.

The modeling agency, which Chettri described to Dazed as a "dream I have had for a very long time," takes things even further by providing Chettri and her community with a sense of worth and equality.

"We want to ensure that transgender people are seen as beautiful, and have a right to do what other males and females are allowed to do at present," Chettri told Dazed.

By modeling, the hijras are merely doing what countless women have done before them. They can hopefully feel good about their own beauty, but also put images of hijras out there, which Chettri hopes will transform the way that they are seen and perceived in the country.

"We want to become positive role models for others, so no one else has to grow up as we did, feeling like there was something wrong with them, and they were the only person in the world born like this," she writes on the agency's GoFundMe page.

Trans women are also finding success in modeling in the United States. Models like Hari Nef and Andreja Pejic are in high demand, and New York City saw the opening of its first transgender modeling agency, called Trans Models, in 2015. But above all else, Chettri wants modeling to give hijras the chance to just participate in another profession, in a positive way, since finding employment as a hijra is difficult, much like it's still difficult for transgender people in the United States.

"My community is excited," Chettri told Dazed. "They never thought they were going to get an opportunity in their lives to do something other than begging and sex work. They have spent more than half of their lives becoming feminine and spending money to look beautiful. So they want to showcase it."

Watch the full video of Chettri's modeling audition below: