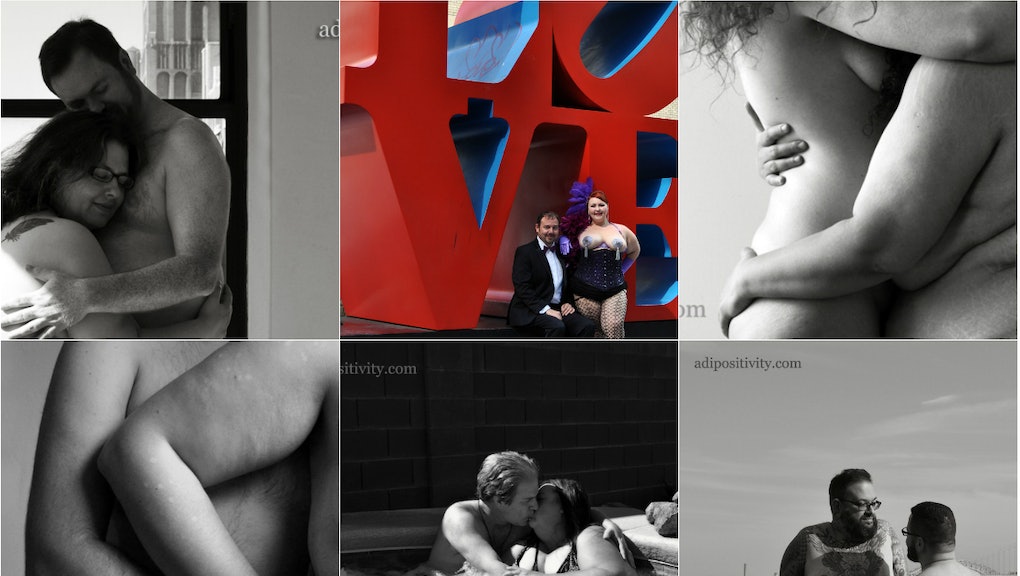 This Body-Positive Nude Photo Series Shows the Fatter, Queerer Side of V-Day Love

This Valentine's Day, as with every Valentine's Day, we'll be subjected to ad after ad after ad of thin, conventionally attractive straight couples in love. IRL, many of these couples will likely celebrate the holiday with a night filled with rose petals and super-special, super-hot V-Day sex.

But you know who's also gonna be having some super-special, super-hot V-Day sex? Fat people! And fat gay people! Because they do exist.

We're not exactly used to seeing unapologetically overweight, nude depictions of love and sex in mainstream culture. But photographer Substantia Jones, founder of The Adipositivity Project, aims to change that. For the past few years, she's been releasing an annual "Valentine's Series" (which Mic has covered in the past), artful sets of photographs depicting fat-on-fat love to celebrate Valentine's Day. This year, she's taking the series a step further by shooting an even more diverse range of couples, including her first ever same-sex male couple.

"I'm particularly excited about this year's series," Jones told Mic in an email.

Note: A number of the following photos contain nudity, so may be deemed NSFW by some.

Jones said that while her year-round Adipositivity photos are meant to inspire individuals to celebrate their bodies, the Valentine's Series is special because it gives fat people a chance to loudly proclaim their love to the world via intimate portraits.

"Many fat people and their partners feel excluded from those sorts of declarations, for fear of bigoted ridicule," she said.

She added that most of her subjects come to her requesting photo shoots after finding her work on the internet.

"Some tell me seeing my photos has been transformational for them, easing their body shame and arming them with what they need to push back against sizeist bigotry," she told Mic. "Others just tell me they're pleased to add The Adipositivity Project to their fat acceptance arsenal."

Indeed, many couples report that posing for Jones has been something of a liberating or even therapeutic experience.

"Learning to love my body has been a slow process," said 42-year-old "SK" in an email to Mic. "I sat for Substantia with my partner and have hung up a print of her photo in my bedroom to remind myself that what I have been taught about beauty is not only wrong, but harmful."

"I don't consider myself to have a lot of body issues, and I've certainly done some strange things in my life, but posing in my skivvies in public was not on that list," said Nick, one half of the same-sex couple featured in this year's Valentine series. "[But] it's funny how not awkward it was once I took off my clothes and posed."

As for the usage of the word "fat" in her series, Jones told Mic that she prefers it to other descriptors of larger people that may inadvertently perpetuate the thin-worshipping body standards that she hopes to combat with her work.

"The word 'fat' is a morally neutral descriptor," she wrote in a press release sent to Mic. "I use it, and I encourage you to. I am fat. 'Overweight,' however, is a term of judgment, suggesting there's an agreed-upon size beyond which one mustn't exist. And 'obese' pathologizes a naturally occurring point on the spectrum of benign human size variation."

Regardless of the terminology, Jones aims to spread a positive message of self-love to people of all sizes with her photos.

"You must love your own body in order to fully appreciate a partner loving it," she said. "I can't imagine having a fulfilled sex life without loving your body."

Check out more of Substantia's work over at her website.