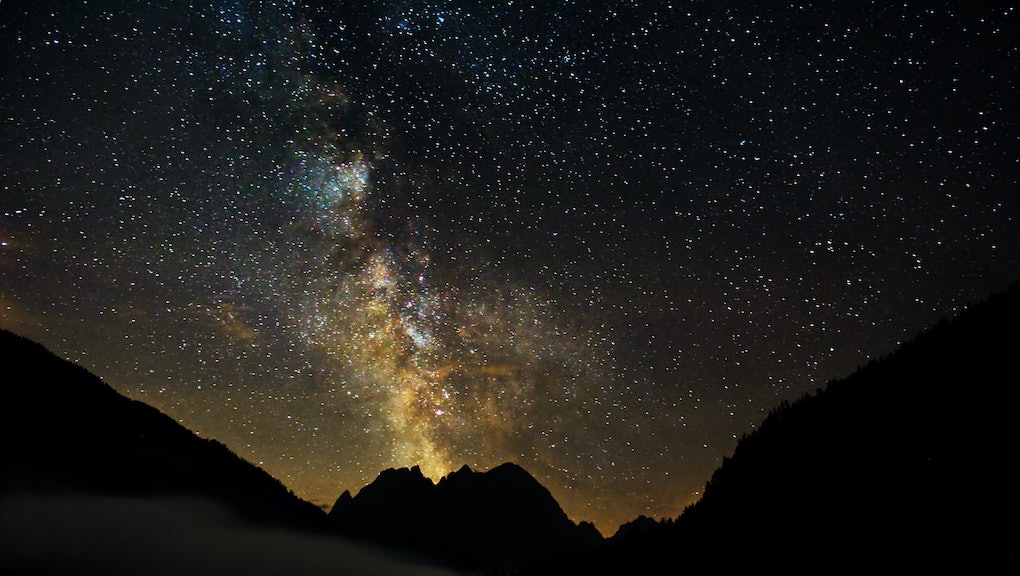 Our beloved Milky Way is beautiful, but it's also a giant attention hog, obscuring a substantial part of the sky with its mass and dust. In a new paper published Tuesday, however, scientists revealed that they were able to see past the Milky Way for the first time — and what they found might have big implications for our understanding of the universe.

Using a radio telescope called the Parkes telescope, a team of international researchers delved deep into the recesses of the Milky Way and discovered an astounding 883 galaxies, 240 of which were previously unseen by scientists.

"The Milky Way is very beautiful of course and it's very interesting to study our own galaxy but it completely blocks out the view of the more distant galaxies behind it," Lister Staveley-Smith, the paper's lead author, said in a press release.

Because the team used a radio telescope equipped with a multibeam receiver, which let them perform night sky surveys 13 times faster than before, they were able to look through the dust and other space matter to see beyond the Milky Way. Astronomer Renée Kraan-Korteweg, one of the paper's authors, said in the release, "We've used a range of techniques but only radio observations have really succeeded in allowing us to see through the thickest foreground layer of dust and stars."

The Great Attractor: While the discovery by itself is pretty rad, it's also notable because it may provide some answers for what scientists call the Great Attractor, a mysterious region of space that is currently pulling our Milky Way galaxy — as well as hundreds of thousands of other galaxies — into its clutches with the power of roughly a million billion suns. (Did we mention we're traveling toward it at 1.2 million miles an hour?)

"We don't actually understand what's causing this gravitational acceleration on the Milky Way or where it's coming from," Staveley-Smith said. (Comforting!)

We didn't know much about the Great Attractor, primarily because it was blocked by the Milky Way. Now, however, researchers are moving closer to figuring it out. According to the team, this new, previously undiscovered group of galaxies may collectively produce enough gravitational force to power the Great Attractor.

The paper pinpointed three galaxy concentrations called NW1, NW2 and NW3, as well as two clusters called CW1 and CW2, that may account for the pull.

"An average galaxy contains 100 billion stars, so finding hundreds of new galaxies hidden behind the Milky Way points to a lot of mass we didn't know about until now," Kraan-Korteweg said.

Still, despite the exciting discovery, scientists aren't quite done yet.

"Further follow-up studies are still required to quantify the mass that these galaxies seem to trace and see if this is in full agreement with what the Great Attractor suggested," Kraan-Korteweg told Smithsonian magazine.

"But we are a major step closer in this endeavor," she added.