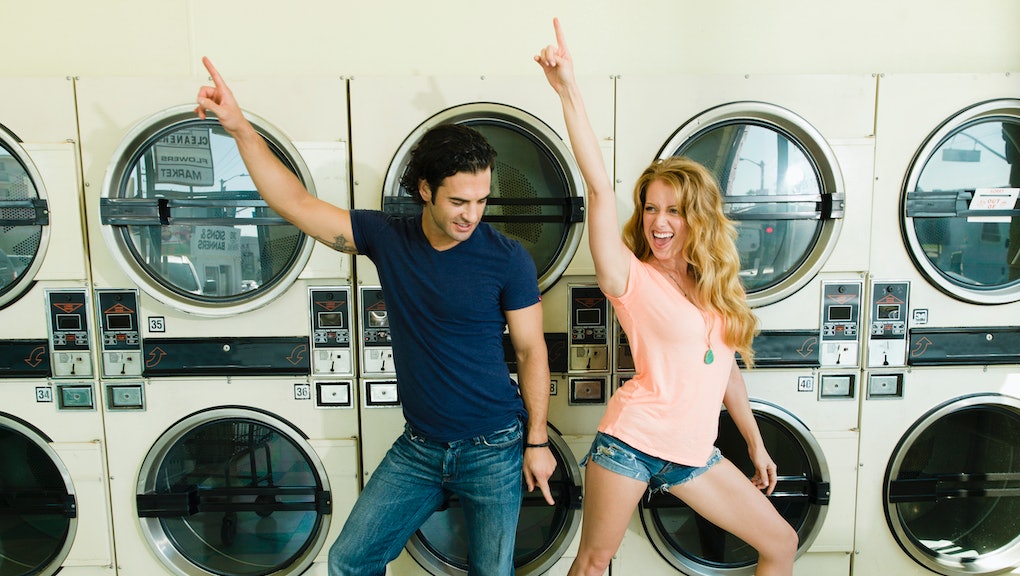 Men Are Finally Doing Their Own Damn Laundry

We all laughed when, in 2014, Yankee Candle introduced their line of "Man Candles" (mandles?) boasting rugged scents like "Camouflage," "Riding Mower," and "Mmm, Bacon!" Smells are among the slew of things that are needlessly gendered, but now companies are betting on it.

According to the Wall Street Journal, more men are now actually washing their own clothes and companies are following their lead with gender-specific products and marketing.

Citing research group Mintel's annual survey on laundry, the Journal reported that out of 2,000 male and female consumers, 67% of men ages 18 to 34 said they were "mainly responsible for their laundry" in 2015, up from 44% in 2013. (Lest you think two-thirds of the male population are engaging in a nationwide protest of traditional gender roles, consider one stat: According to the U.S. Census Bureau, 47% of the adult male population is single.)

Procter & Gamble, which manufactures Tide and other household products, told the Journal they've been sniffing out other new marketing strategies.

In 2012, P&G rolled out "Victory Fresh"-scented Tide plus Febreze Freshness Sport, shilled by NFL quarterback Drew Brees, while Bounce began offering "Bounce for Men" in 2014. Though the company doesn't describe what makes the scent so manly, reviews on the company's website speak volumes:

Wrote one happy customer, "I am a male and do my own laundry. I have used Bounce for years and wished there was a more 'manly,' fun fragrance that was offered. Now there is."

Another agreed: "It has a great masculine scent like P&G's other product Old Spice Pure Sport body wash, soap, body spray and deodorants."

Other brands have added special features to their products to account for men who are less likely to separate their laundry and more likely to let dirt set before getting around to washing their clothes. Whirlpool developed a special cycle to keep colors from bleeding and Hero Clean Detergent added chemicals built to fight stains, reported the Journal.

"Now, as habits change, we talk about him and her," Sundar Raman, P&G's North American vice president, told the Journal. "It's a fundamental shift in how we're approaching the business."

But before that shift, P&G struggled with how to address the changing times. In 2011, the company aired a contentious Tide commercial featuring a husband who self-identifies as a "dad mom" because he does the laundry.

"I can take even the frilliest girl dress and fold it with complete accuracy," says the dad mom. "And with Tide Boost, I can use the brute strength of dad to mix with the nurturing abilities of my laundry detergent." After he finishes folding the piles of dresses, he tells viewers he has to go do some pull-ups and crunches. You know, man stuff.

Two years later, the company debuted a new spot that reflected the progressive tone the dad mom commercial ostensibly tried – and failed – to communicate. In the ad, a father washes his daughter's costumes without a single reminder or complaint that he, a man, is the one doing the laundry. And nary a mom is seen. (Also worth a mention was the 2014 Tide ad featuring a gay couple that aired in Canada.)

The more recent Tide ad is a reminder that #MasculinitySoFragile. Here's hoping that more men continue to do their share of housework — and that they can someday be freed from the burden to follow up that rinse cycle with 100 burpees.