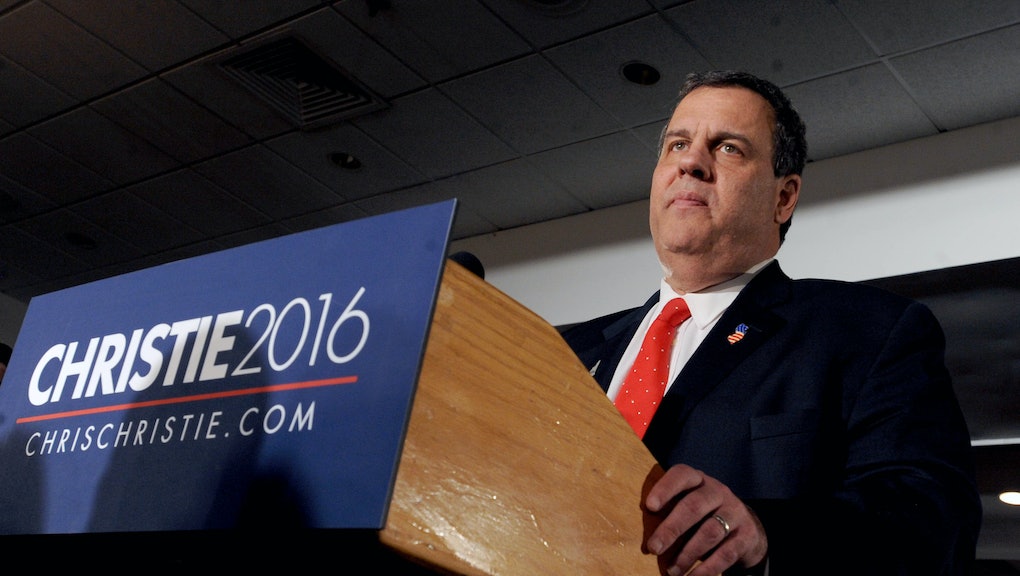 Maybe he wasn't born to run.

Republican Chris Christie, the New Jersey governor and Bruce Springsteen fan who bet his presidential hopes on New Hampshire, will suspend his campaign as soon as Wednesday, according to multiple reports.

Following those reports, however, Christie spokeswoman Samantha Smith told Mic that "no decision has been made." Later on Wednesday, Smith confirmed that Christie had told staff he was suspending his campaign at a meeting in Morristown, New Jersey.

Christie, who played well as a top speaker at the 2012 Republican National Convention, staked his run on a big win in the Granite State. It didn't materialize — he finished sixth in Tuesday's first-in-the-nation primary.

Christie's campaign announced late Tuesday that rather than plunge on to the next early primary state, South Carolina, Christie would head home to take a "breath" and ponder the future.

Knew it was coming: Christie sounded a note of resignation about his presidential prospects while addressing supporters in New Hampshire before heading back to the Garden State.

"I have both won elections that I was supposed to lose and I've lost elections I was supposed to win," Christie said Tuesday night as results came in. "It is both the magic and the mystery of politics that you never quite know when which is going to happen, even when you think you do.

"And so, we leave New Hampshire today without an ounce of regret, not for the time we've spent and for the thousands of people tonight in New Hampshire who will have voted for us. We thank each and every one of them for the confidence that that vote represents in us as people and in us as servants."

Failure to launch: Christie entered the race in June with a kickoff speech in the high school gym of his hometown, Livingston, New Jersey.

Flanked by his wife and four kids, the tough-talking governor promised to "tell it like it is," saying his experience as New Jersey's chief executive and former federal prosecutor would help him cut through the Washington nonsense as president.

At the same time, Christie sounded warmer personal notes throughout his bid. In particular, he pressed for compassion and help for people fighting addiction — something he also made a hallmark of his time in Trenton.

But a campaign heavy on retail politics — he ran nearly 80 town hall-style meetings and ran back to New Hampshire amid criticism that he left New Jerseyans in the lurch after a damaging snowstorm — couldn't move Christie's numbers.

His tough talk wasn't always for everybody. He also had increasingly sharp exchanges with Florida Sen. Marco Rubio, leading pundits to say their political relationship had devolved into a "murder-suicide" after they tore into each other at the most recent GOP debate.

He'll be back: Christie suggested in his Tuesday night valedictory that you ain't seen the last of him.

"To the people of New Hampshire and to the people of our country who are watching tonight, I say thank you for your confidence, your support, for your taking the time to listen, to the things that we've had to say. You know me, I won't stop talking," he said.

"I will continue to speak out about the issues that I care about; we will continue to work really hard together. And we will move down the road from here based upon the results tonight in what is best, in this order — for my family, for my state, and for my country."

Who's left? As Mic noted in its live coverage of the New Hampshire primary, Christie isn't the only Republican candidate who will have to make hard choices soon.

With the next televised GOP debate set for Saturday in Greenville, South Carolina, just ahead of the Palmetto State primary, Christie won't be the only famous face absent from the prime-time stage — or soon, possibly, from the race itself.