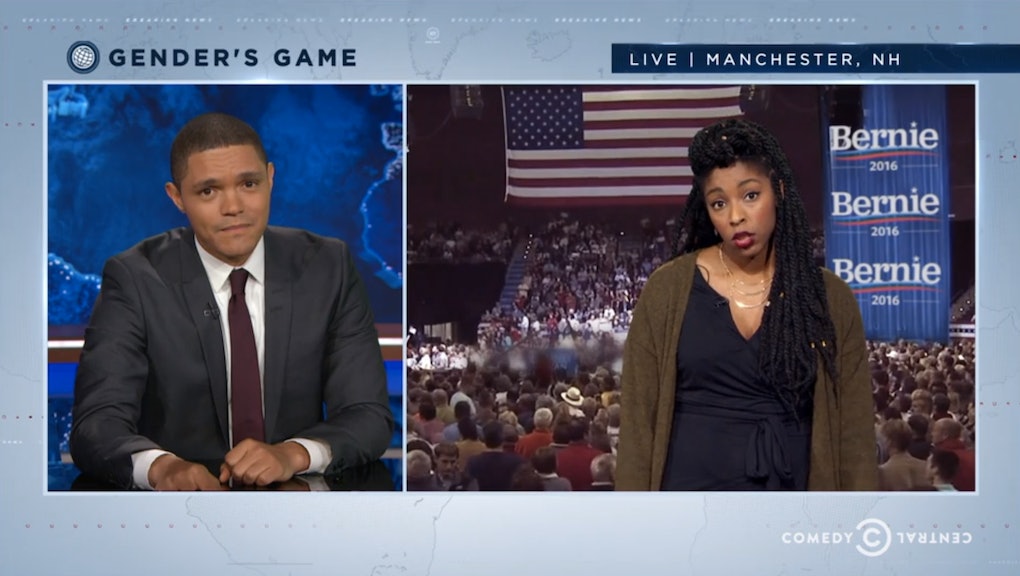 This is the rhetoric some are using in the chatter surrounding the presidential primaries. And it has been artfully labeled the "Vagina Vote."

Women are being accused by some of supporting Hillary Clinton because they have vaginas, while other factions insist women should support her because, well, they too have vaginas. (Take former Secretary of State Madeleine Albright's comments at a Clinton rally on Saturday: "There's a special place in hell for women who don't help each other!" No pressure.)

But on Tuesday, the Daily Show With Trevor Noah correspondent Jessica Williams had a strong message for all those espousing labial suffrage.

"I mean, Trevor, what else am I going to vote with?" she asked. "I literally vote with my vagina. That's right — these things aren't just made for popping out babies. They're like third hands."

"And I know that dudes can pee standing up," Williams continued, "but big fucking deal because I can pull a lever with this bad bitch."

Then came the impassioned soliloquy — less ironic this time.

"Clearly," said Noah, "you're annoyed that people keep dragging gender into this."

"Yeah, thank you for finally catching up, Trevor," said Williams. "Yeah, the sexism is annoying. But it's the women shaming each other that's the most upsetting. It is so diminishing for women to accuse other women of supporting Hillary only because she's a woman."

Williams lampooned the second camp of people dragging vaginas into the mix, arguing gender solidarity is hardly reason enough to vote for a candidate

"Both sides are being straight-up booty right now, because it's diminishing also for women to tell other women that they're obligated to vote for Hillary because, you know, we all have vaginas."

There has been little talk of men voting with their penises in this election cycle — or any, for that matter — highlighting the entrenched gender bias in the process, on the part of both the candidates and the electorate.

"We, as women, need to remember that we all want one thing — and it's Michelle Obama's arms," Williams concluded. "But also, seriously, we want the freedom to vote for who we want to regardless of what our husbands or wives or friends say about it."

The full segment can be watched here: