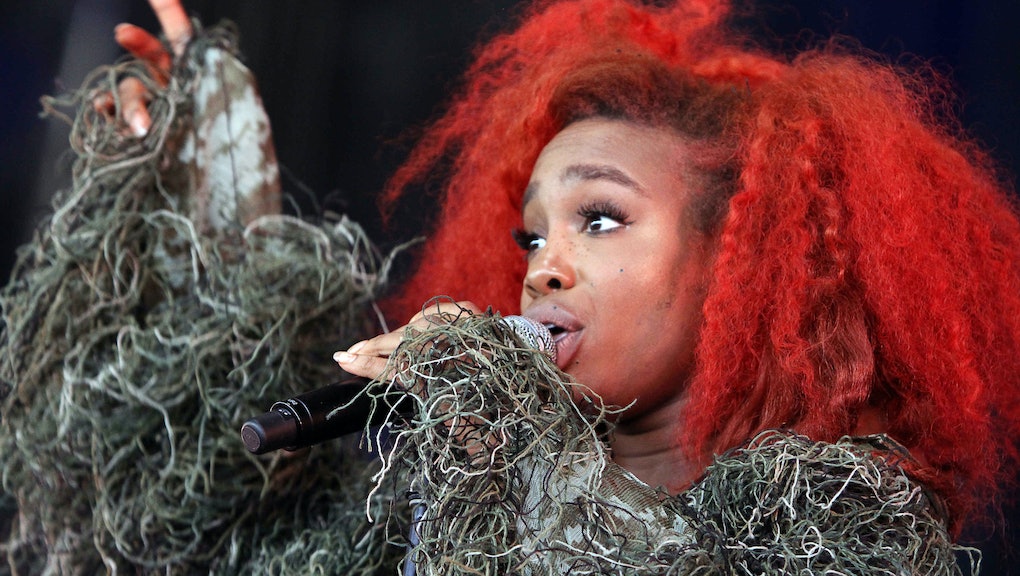 Who Is SZA? Artist Featured on Rihanna's 'Anti' Has Extensive Alternative Music Career

When Rihanna released her rebellious breakaway album Anti, it marked a definitive turning point in the singer's career. On "Consideration," the first song on her eighth studio album, an ethereal voice could be heard crooning over the mellow beat. RiRi paired with SZA for the track, a lesser-known but incredibly talented musician with a unique style and alternative flare.

"Being who you are is important," SZA told Huffington Post in 2015. "Once you alter who you are, people will think they were right [about you] the whole time."

SZA is a signee with Top Dawg Entertainment, an American music label founded in 2004 with a knack for picking up-and-coming hip-hop artists. Complex reported SZA was signed to the label after releasing two albums online for free in 2012: See.SZA.Run and S. Before then, SZA was a viral phenomena almost immediately after releasing "Time Travel Undone," her first official song. The track appeared on numbers underground music blogs, and currently has almost half a million streams on YouTube alone.

Meanwhile, her former boyfriend was working producers alongside hit-maker Pharrell, so she spent a good portion of her time hanging out with artists and fellow producers. Though she wasn't interested in pursuing music as a career choice, that all began to change after industry insiders began picking up on her talent.

After switching management and eventually landing with her current music label, SZA feels right at home. "That's the way it's supposed to be," the musician told Complex about her tight-knit label, which she considers her "ride or die team."

"I'd rather somebody nurture me in my creativity and give me all the tools I need, link me with any producer, and give me a studio I can record in all the time and maybe come in every once and awhile and organize my thoughts and talk to me."

As SZA's musical style continues to grow, so does the girl behind the music. "My first live show at CMJ I cried and ran off stage," the singer told Mass Appeal in 2014. "It was last year. I was just nervous and unprepared. I had no sense of self. I had no band. Now I have a full band and a DJ and a little bit of lighting ... You figure it out."

Though the rising celebrity prefers to stay out of the public eye, she has maintained quite the loyal following through her incredible style, refreshing sound and rather blunt Twitter posts:

Her latest album, Z, is available through iTunes and features 10 tracks from SZA.