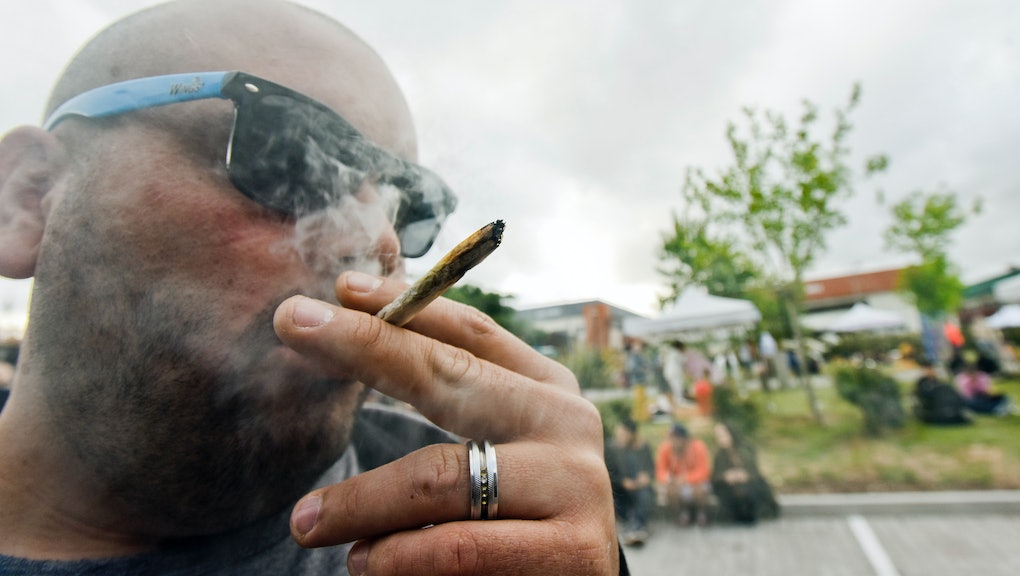 Can Pot Give You Cancer? That Could Depend on How You're Using It

Can pot give you cancer? The answer to that question is a resounding "maybe." Intuition says a substance that potentially causes cancer shouldn't be prescribed to cancer patients as part of their treatment, as medical marijuana sometimes is. The risk seems to vary depending on how a person ingests weed.

We know that smoking cigarettes causes cancer, which is why research on the connection between cannabis and cancer has focused on the effects of smoking marijuana. Yet the findings have so far proved inconclusive, in part because the possible link has been identified so recently that the data to support it (or to disprove it) does not yet exist.

But, as with all things substance-related, it's best to err on the side of caution if cancer is your concern.

"Just because there is not a large scale, longitudinal study proving marijuana smoke causes cancer does not mean it can be ruled out," Jann Gumbiner wrote in 2011 for Psychology Today. "The widespread use of marijuana for recreational uses is a relatively new phenomenon. With time and more research, marijuana smoke may very well prove to be as lethal as cigarette smoke."

The operative word there is "may." Again, scientists just don't know. They can, however, draw some parallels with cigarettes.

According to Gumbiner, a minimum of 6,000 chemicals found in cigarette smoke are also present in marijuana smoke. A joint doesn't contain nicotine and a cigarette doesn't contain THC: Those, Gumbiner said, are the only big differentiators between the two.

Another notable factor is the way most people smoke weed. Holding the smoke in the lungs for a longer period of time improves the high, or so prevailing thought suggests. This, combined with the tendency to inhale more deeply when smoking a joint than one would when smoking a cigarette, means the lungs are hit with more tar on every puff, according to the American Lung Association.

Let's go back to the smoking medium for a second. A spliff (because of its contents) or a blunt (because of its wrapper) still involves tobacco. The fact that people so frequently mix marijuana with tobacco makes it difficult to know exactly what the relationship between cannabis and cancer is, according to Cancer Research U.K.

Research on the effect of cannabis alone on cancer points in both directions, Cancer Research U.K. reported. Some studies have suggested a relationship, some have not. The only thing that's clear is that smoke and lungs are incompatible, period. The safer bet? Edibles and ingestible oils.