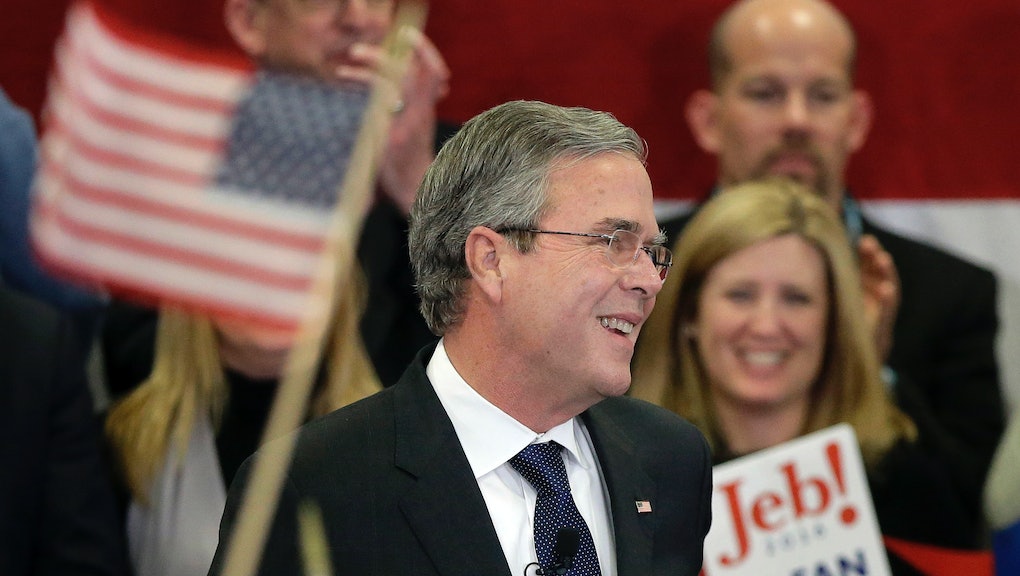 Presidential candidate and former Florida Gov. Jeb Bush, once hailed as the likely GOP nominee for president, endured the latest blow to his campaign with a fourth-place finish in Tuesday's New Hampshire primary race.

But it's the sheer amount of money his campaign and associated super PACs poured into the New Hampshire race that perhaps stings more. According to data from Morning Consult, Team "Jeb!" spent approximately $36.1 million — roughly $1,150 for each of the 31,310 votes he saw in New Hampshire.

That's more than 30% spent by price-per-vote runner-up Chris Christie ($878 per vote), whose own poor showing in New Hampshire was followed by a suspension of his campaign. It's much more than close competitor Marco Rubio ($457 per vote) and over 30 times as much as Donald Trump, who pulled off a resounding victory with a meager $37 per vote.

Some of Bush's donors consider the New Hampshire results a victory. Others are calling his showing a major disappointment. But hard numbers are inarguable: Here's what Bush voters in New Hampshire could have purchased with all the cash per person necessary to produce that fourth-place finish.

1 month of food stamps for about 9 Floridians

Each month, the federal government's Supplemental Nutrition Assistance Program gives out an estimated $129.33 per recipient in Florida. Last month, Bush called for the end of that program.

A visit to the land of cheese-eating surrender monkeys who wouldn't even invade Iraq with his older brother (a war Jeb still supports) can run as low as $550, according to a recent Kayak search. In November, Bush jokingly apologized to the French for comparing their work ethic to that of U.S. congresspeople.

The Glock .22 will run you $525 plus $25 to ship, so Bush could have given at least 62,620 New Hampshirites the opportunity to exercise their Second Amendment rights with plenty of money left over for extra ammunition. After all, Bush was the 2003 National Rifle Association's Statesman of the Year, right? Or perhaps we're mistaken.

5 ounces of legal weed in Colorado

MarketWatch reports Colorado ganja costs an average of $225 an ounce, though Bush might be surprised at these prices, considering he hasn't smoked weed in 40 years. But maybe it would be best to enjoy that green on a shorter timescale, because if Bush is elected, it's unlikely he'll tolerate legal weed at all.

According to the Energy Information Administration, conventional coal power will cost about $95.10 per megawatt hour for new plants entering service in 2020. Bush, who has courted donations from CEOs in the coal industry, opposes the coal power restrictions scientists say are necessary to cut U.S. carbon emissions.

Hey, sometimes you need to blow off a little steam after a primary beat down, and 17 Fleshlights at $65.95 a pop on Amazon should more than take care of that. At the charter school Bush co-founded in 1996, he prohibited the teaching of sex-ed.

This kitschy delight will set you back a mere $25 a hat. And if Trump keeps up his momentum, Bush voters might just need them.

Seventy-seven hours is a conservative estimate for how much labor an employer could squeeze out of a worker under a Bush presidency, considering the candidate has previously suggested that the federal minimum shouldn't exist at all.

Way less than 1/2 of a Bush vote in Iowa

As much as Bush spent in New Hampshire, it pales in comparison to the amount of cash he dropped in Iowa, where Bush and associated super PACs dropped over $2,800 for each of the Iowans who turned out to give him just 2.8% of the final tally.