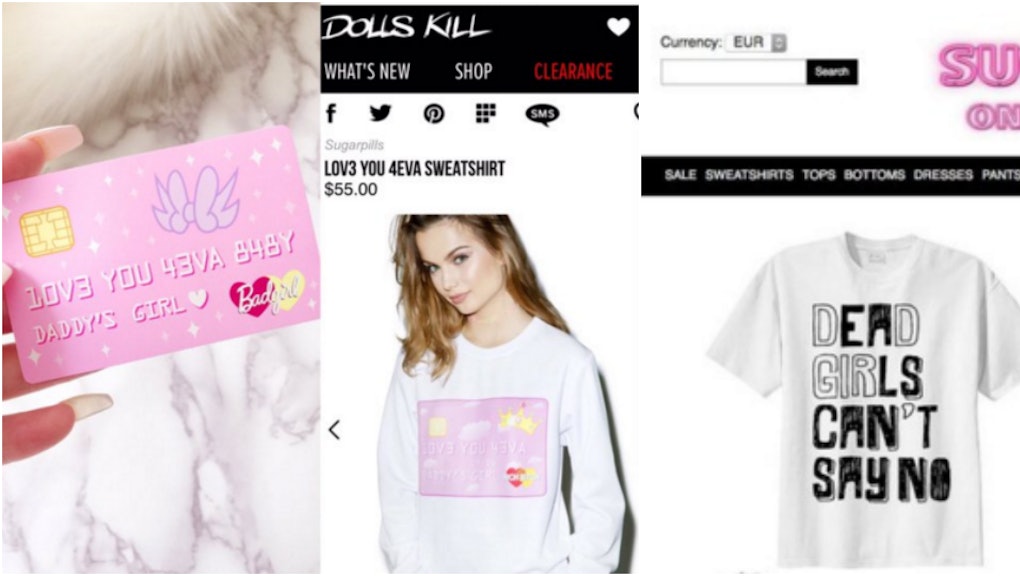 Twitter Is Pretty Pissed Off About This "Rape Culture" T-Shirt

Graphic T-shirts aren't exactly a literary art form. Still, it might be surprising that a brand these days would print a shirt with the slogan "Dead Girls Can't Say No" and not imagine it would see some backlash.

Sugarpills, a Poland-based online clothing brand, and Dolls Kill, an American online retailer that stocks the brand, are currently on the receiving end of Twitter wrath for a T-shirt that reportedly appeared on Sugarpills' websites.

The shirt, a photo of which was tweeted by Sydney-based artist and designer Bei Badgirl, reads "Dead Girls Can't Say No." As Badgirl noted on Tuesday, the sentiment "promotes rape culture."

It's not nearly the first time a clothing company has been accused of promoting rape or rapey sentiments. (Remember the "Eat, Sleep, Rape, Repeat" shirt from Coachella?) In fact, it's not even the first time a shirt has been emblazoned with the phrase "Dead Girls Can't Say No."

But Badgirl's more than 9,000 followers are less than pleased and tweeting their disgust, both for the shirt and the fact that Sugarpills appears to have plagiarized some of Bei Badgirls' designs. The sweatshirt in question, the "Lov3 You 4eva Sweatshirt," has apparently been pulled from Dolls Kill's website. (Mic has reached out to Dolls Kill, as well as Sugarpills and Bei Badgirl, for comment.)

Bei Badgirl has a slew of young fans to match her own status as a young, progressive, body-positive, sex-positive indie artist — one with no time for hate or discrimination. When asked by Sneaky what feminism means to her, she noted, "It's not about man-hating — maybe dickhead-hating, rapist-hating, sexual predator-hating."

Neither of the companies have responded with formal apologies yet, as plenty of apparel companies who find themselves in hot water with shoppers tend to do. But given the close access that social media given stores to their customers, we can bet they've at least seen the tweets and heard the message loud and clear.

When we saw this all "promoting rape culture" thing we were like "WHAT?" We will never ever promoting such a bad thing like rape. We had this tee at our website but tee was out of stock anyway, when we started a clothing company we had this tee in our regular sale, but I would never meant to promote rape... It was the first time when someone accused us of promoting rape by this tshirt or whatever other design. Our website and social media are all like pastel pink and here is to answer yourself a question, is this matching our aesthetics? No, it doesn't.