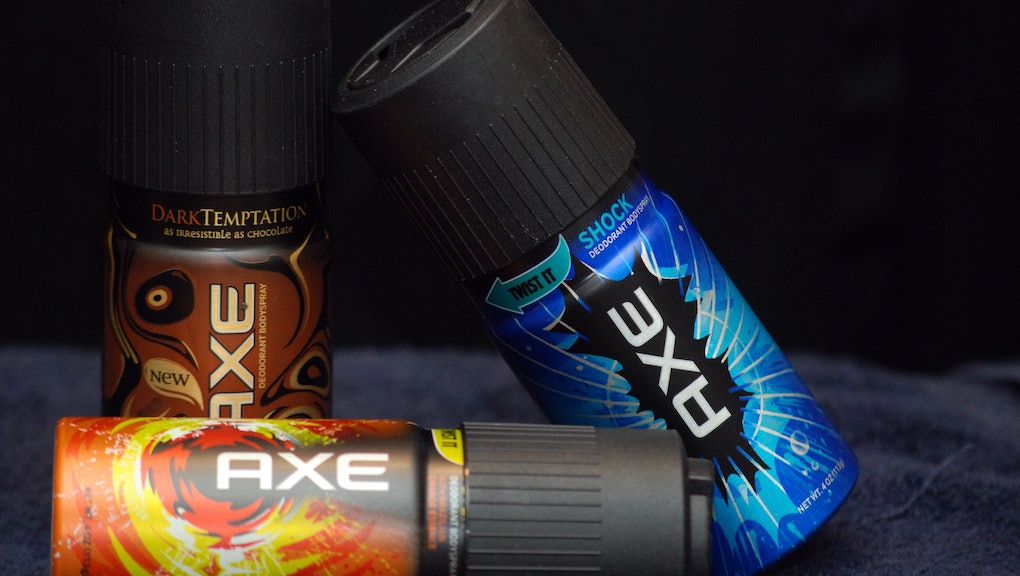 That Axe Scent You Hate? Maybe It's Not as Terrible as You Remember...

But, well, does Axe really smell that much worse than any other cologne? Or is it poor marketing and the lingering traumas of our teenage years that give Axe its bad rep?

The once-king of pubescent douchebags, Axe is undergoing a much-needed makeover. The brand's new "Find Your Magic" campaign includes a hint of the traditional steamy shower scene and bedroom shot of a girl gasping in orgasm, but also includes a disabled man dancing in a wheelchair and another vogueing in heels, not to mention an assortment of body types, races and sexual preferences (they even throw in some kittens).

It all adds up to show the brand intends to cash in on the trend of diversity in advertising and clean up its rep, an effort that's been applauded.

The new ads are in stark contrast to the original "The Axe Effect" campaign that marketed the grooming products as chick magnets, sure to get you laid. Those were the ads that laid the foundation for Axe's shitty reputation for being the scent of choice for sexist bros everywhere.

It's that same marketing that also got it into the hands of teen boys, as Martin Lindstrom wrote in his book Brandwashed, excerpted in the Atlantic. Axe debuted with a clear message for insecure young men: Use Axe and you'll get laid by beautiful women.

The initial "Axe Effect" commercials, which aired in 2006, were a massive success among young men, making Axe deodorants and its infamous body sprays a top-seller. In fact, wrote Lindstrom, "Insecure high-school students had been so convincingly persuaded that Axe would make them sexually appealing that they began completely dousing themselves in it."

Hence the strong middle school and high school associations. Axe was literally made for pubescent boys, meant to drum up male confidence and bravado during their most self-conscious moments.

"I remember when Phoenix came out, it was right around the time when I was becoming a man," Lee, 28, a long-time Axe deodorant user, told Mic. "I was starting to get smelly and I had these hairs that were coming into my armpits, and I was like, 'what are these things?' I saw these commercials and was like, 'Oh wow, if I can smell good, and play sports, and get girls, then that is exactly what I want.'"

Others remember the same associations, though less fondly; the online hatred of Axe runs deep. "It is repulsive and nauseating smelling," answered UsernameUnknown on a Reddit thread asking for women's opinions on the brand. "It instantly reminds me of smelly teenage boys," agreed Little_Lion.

Outside of Reddit, the reputation lingers. Anna, a 25-year-old Ph.D student, told Mic:

To me, Axe body spray says you still get boners when you dance up on girls, you put cheap grease in your hair, you wear pants with either too many pockets or no pockets, you feel self-conscious about what kind of beer to drink, you feel self-conscious about the phallic suggestion of a beer bottle and you are an incredibly uncreative person whose only redeeming quality is that maybe you love your mom, but even that is in a weird old-world paternalistic kind of way.

But if you can shake off all the bad memories, how bad is Axe? Some men who swear by the product say that the fuckboy reputation is unnecessary and, in fact, unjust.

"Axe definitely got a bad start because guys would bathe in the stuff, especially bro-y dudes in high school and college," Russ, 33, told Mic. "It basically became a next generation version of Cool Water, if you will, and that association is really difficult to shake off. It's part of my personal scent and my daily grooming routine, and I smell damn good. I wear Dark Temptations, the one that smells like chocolate."

Like the blind taste tests that proved people prefer cheap wine to expensive wine when the price tag isn't there, others report that partners enjoy the smell without understanding the scent they are being turned on by is in fact Axe.

Jack, 26, told Mic that he wears it without always fully admitting it. "Women ask me what I'm wearing, and I always say something like Ralph Lauren Black or F by Ferragamo," he said.

"My boyfriend would wear it," Melanie, 32, told Mic. "He liked the smell, and dare I say no one ever questioned it."

It also might help that grown men don't quite douse themselves in it. But if maturity, fading teen memories and more responsible application can't change our conception of Axe today, the new ad campaign is making an effort.

"[Find Your Magic] was a great ad," said Lee. "[There's] gay stuff, flamboyance — that was amazing. ... They're saying it doesn't matter what you have as long as you own what you have, as long as it's you, and you accept it and you love it, that's what really makes you amazing."

That opportunity has always been in the spirit of Axe. When Slate writer and mother Dahlia Lithwick tried it herself, she wrote, "I smelled the way an adolescent male smells when he feels that everything good in the universe is about to be delivered to him, possibly by girls in angel wings. I had never smelled this entitled in my life. I loved it. I wanted more."

I also needed to smell it for myself. When I swung by the pharmacy to pick up my birth control, there they were: bottles of Axe deodorant, lined up like little soldiers ready to head into battle. I reached out and grabbed a stick of Phoenix, and checked to see if anyone was looking. I unscrewed the cap and deeply inhaled. It smelled the same way it did in high school: full of fire, intrigue and, perhaps, a little magic.