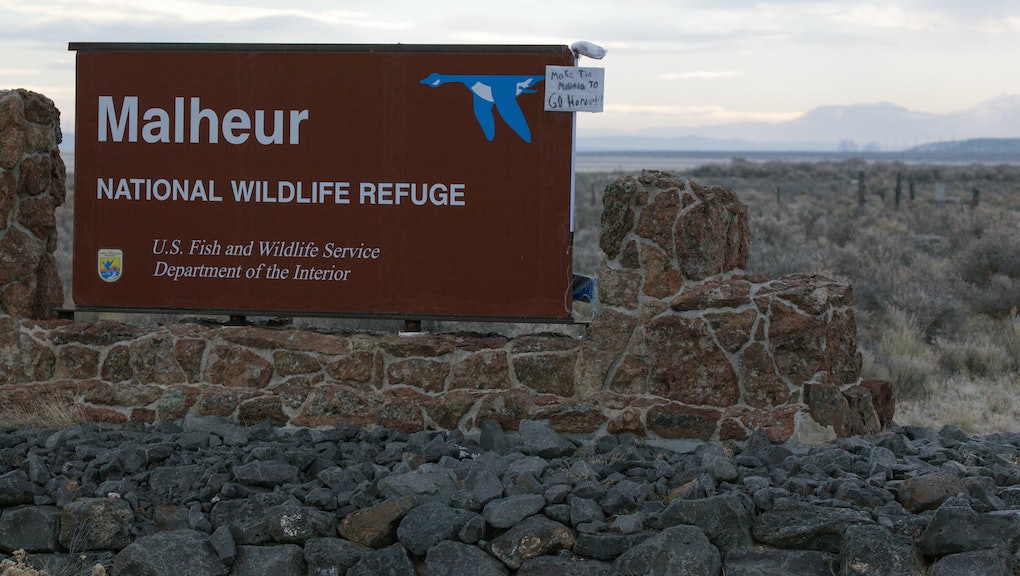 On Wednesday night, the FBI moved one step closer to bringing down the hammer on the last remnants of the Oregon occupation, surrounding the encampment and pushing toward a final resolution. The ragtag band of domestic militia have occupied the Malheur National Wildlife Refuge in Burns, Oregon, for 40 days.

To that end, the FBI also arrested Cliven Bundy, the father of protest leaders Ryan and Ammon Bundy. The elder Bundy had himself been involved in a long standoff against the U.S. government over land grazing and achieved near-legendary status among anti-government groups for successfully rebuffing a previous effort by the bureau of land management to arrest him in 2014. Bundy was taken into custody by the FBI shortly after landing in Portland, reportedly on his way to Burns. Jail records indicate he was booked just before 11 p.m. Pacific on Wednesday night.

It was that night that authorities surrounded the refuge, and prepared what first seemed to be the final assault on the compound. The occupiers were first made aware of the FBI's movements when one occupier left the barricade and spotted agents cordoning off the area.

What ultimately unfolded was a frantic four-hour phone call between a number of occupiers and Nevada Assemblywoman Michele Fiore who was en route to Burns alongside Ammon Bundy's lawyer. Over the course of the conversation, Fiore and the occupiers discussed the founding fathers, Obamacare, the media and the terms of their surrender. They also prayed.

The entire call was livestreamed over YouTube, at one point to over 60,000 listeners.

A number of occupiers said that should the FBI storm the compound that evening, they would fight to the death; but otherwise they would prepare to leave the refuge peacefully on Thursday. Highlights from the call were captured in real time on Twitter.

"We are not surrendering, we're turning ourselves in," a militiaman identified by the Guardian as Sean Anderson said on the call. "It goes against everything we believe in, but we're going to do it."

In the end, the FBI does not appear to have made any decisive movement on Wednesday and thus far, no shots have been fired. "The FBI has negotiated with patience and restraint in an effort to resolve the situation peacefully," Greg Bretzing, the FBI's Oregon chief told CNN, explaining the agency's decision to surrounding the encampment.

"We reached a point where it became necessary to take action in a way that best ensured the safety of those on the refuge, the law enforcement officers who are on scene and the people of Harney County who live and work in this area," he said.

Most of the Oregon occupation leaders, including Ryan and Ammon, were apprehended by authorities in January during a highway traffic stop, which also led to the death of the group's unofficial spokesman LaVoy Finicum. Since being taken into custody Ammon Bundy has called on the remaining holdouts at the refugee to surrender.

The ranch was first occupied to protest the arrest of rancher Dwight Hammond and his son Steven. The men both served time for arson, but were later ordered back to jail by a judge who said their sentences had not been long enough under federal law. More broadly, the occupation took issue with the extensive land holdings of the U.S government in Oregon. More than half the land in the state of Oregon is owned by the federal government, and activists have long wanted that ownership devolved to the local level.

With the sun now rising over the Beaver State — the final conclusion of the Oregon occupation may be at hand.